Love it or Hate it: Veritaffles 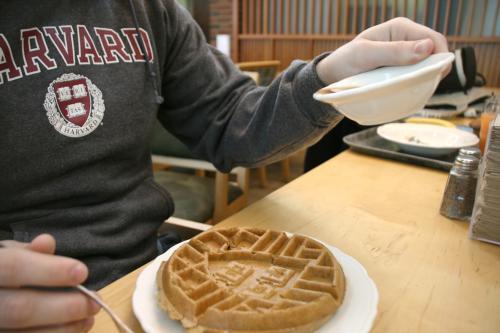 The brunch experience isn’t complete without trying a Veritaffle at least once, but not everyone is here for the Veritaffle experience

What better way to start your Sunday than with a waffle that reminds you what school you go to? Being able to say that you made your own breakfast is also an added plus. There’s no reason to drop an extra $10 on avocado toast when you can get a free waffle every Sunday. Waiting in line to make your waffle is justified by the fact that you made it yourself, so your food actually looks good and appetizing for once.

Let’s not forget about the Veritas seal itself — there’s nothing that screams Harvard more than eating a waffle with a Harvard crest. Nothing beats the Veritas flex you can force on your family and loyal Instagram followers. Let’s not forget the lovely conversations you can have while waiting in line and meeting fellow Veritaffle fans — you can’t get all of that from the standard french toast and pancakes. Veritaffles are reserved for that Sunday slump, and the sugar from the waffle sweetens an otherwise bitter day.

Every Sunday, you wake up dreading the fact that weekend is almost over and you’ve put off all those psets. You make your way to the dhall hoping to eat a nice, quiet breakfast, only to find that the Veritaffle irons are out along with everything that sucks about them.

The biggest problem with Veritaffles is the line, especially in Annenberg. You know it’s Sunday when you walk into the dhall and can’t see past everyone waiting for their Veritaffle. They’ve been there for 40 minutes. Just get toast or Apple Zings — it’s just not worth being that hungry.

If you’re lucky enough to make a Veritaffle, you’ll realize it’s not worth the hype. Waffles are the online dating version of breakfast food — they seem great from far away and then just don’t live up to your expectations. And fine, maybe it’s exciting because the Veritaffle is a fancy take on the normal square waffle pattern, but you’re going to cover it with syrup and whipped cream anyway so does it really matter?

If you’re not yet convinced that Veritaffles are a breakfast food worthy of scorn, think about how obnoxious they are. Harvard merch is everywhere already, so is it really necessary to see it on a waffle too? At least a T-shirt or a lanyard lasts longer than 15 minutes.