Flyby’s Guide to the Oscars 2022 (AKA Flyby Tries: Becoming a Film Snob in Time for the Oscars)

By Matylda A. Urbaniak • 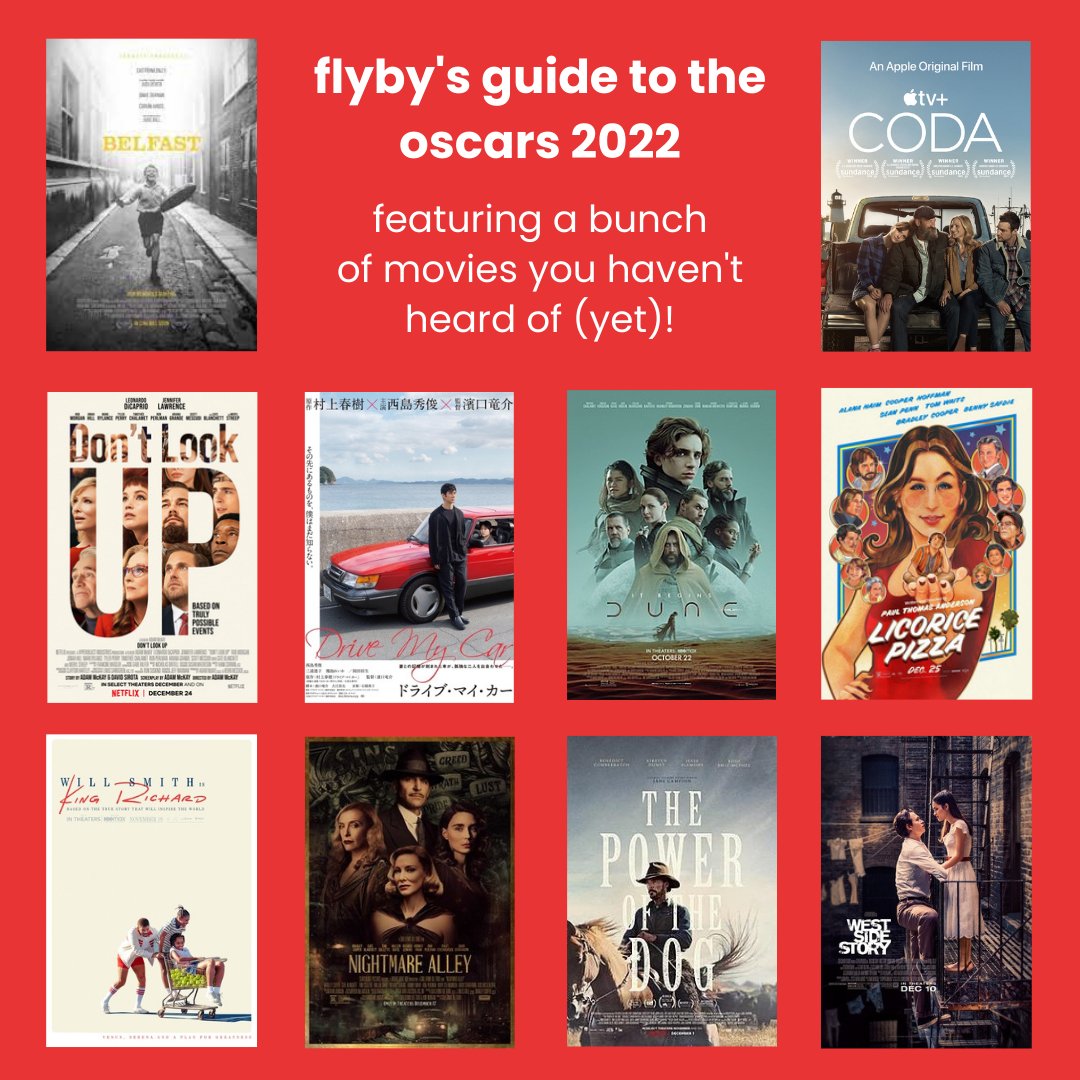 By Matylda A. Urbaniak

On Sunday, the full squad of Hollywood A-Listers will pull up to the Dolby Theater in Los Angeles to politely laugh about how great they all are, talk about how movies can change the world, and give out awards to movies most people have never heard about let alone watched. Whether you’re tuning in just for the outfits, to procrastinate your psets, to see what big mistake the Academy will commit this year, or to hear “We Don’t Talk About Bruno” performed live, Flyby Blog is here to provide you with context for the night’s major contenders. After reading this, you’ll be able to impress your Film Nerd crush, seem culturally in the loop for about two days, and go nuts on Twitter until everyone forgets about the Oscars and nominations are announced next year.

And without further ado, here’s Flyby’s guide to your nominees for Best Picture:

Kenneth Branagh tells the story of his childhood in Northern Ireland during The Troubles conflict in the late 1960s. This movie has achieved the impossible, from making Fifty Shades’s Jamie Dornan into a respectable actor to giving perhaps the sweetest message about moving past ethnic conflict that cinema has seen in a while. As one of the shortest movies on this list, you can definitely squeeze in watching it between lecture and lab.

Standing for Child of Deaf Adults, this nominee (and my predicted winner) is also the most Harvard-centric: main character and Massachusetts native Ruby dreams of attending Berklee (shout-out to our artists who are also enrolled here) but is worried about the impact this will have on her deaf family, who she has interpreted for her entire life. A remake of the French “La Famille Bélier,” watch out for this film in the Best Supporting Actor (the phenomenal Troy Kotsur is the first deaf male acting Oscar nominee) and maybe even Adapted Screenplay categories. If you choose to watch this movie, grab a lot of tissues and open up Spotify because speaking from experience, you’ll be listening to the soundtrack for weeks while studying in Widener.

One of the more well-known Netflix nominees going into Oscar night, this is also one of the most polarizing. Telling the story of a large asteroid on its way to hit Earth and astronomers’ attempt to get the government to care, “Don’t Look Up” has been criticized for its similarity to an SNL skit and its lack of subtlety. On the other hand, it says what needs to be said: climate change is going to destroy us, and Ariana Grande has a beautiful voice. With an all-star cast including Jennifer Lawrence in her return to the big screen, “Don’t Look Up” is at the very least, incredibly interesting, which can’t be said about a lot of films that have been nominated for Best Picture before.

Looking to impress your East Asian Cinema TF? Daydreaming about going to Japan? Look no further. “Drive My Car” is everything a movie should be. Following a theater director whose life is turned upside-down when he discovers that his wife is cheating on him — only for her to die soon after — Ryusuke Hamaguchi’s meditation on grief hits you harder than your professors assigning homework, papers, and labs right before spring break. Support the Oscars’ shift toward being less America-centric by watching this film, a likely winner in the Best International Feature category and nominee for Best Director.

This is just one of the movies featuring Timothée Chalamet nominated this year. I watched it, and still can’t really tell you what happened. But this sci-fi epic is the likely-winner of nearly all technical awards. Seriously, it looks stunning, and I’m not just saying that because Zendaya is in it. With a story about warring groups and a powerful substance that permits travel faster than the speed of light, impress your history professors by pointing out how this film and the novel it is based on are allegories for the Cold War. If that’s not enough to convince you to watch “Dune,” I will repeat: Zendaya.

“King Richard” doubles as this Oscar season’s fan-favorite biopic and random sports movie thrown into the list of nominees to attract the athlete crowd. Featuring likely-Best-Actor-winner Will Smith as their father, the titular Richard, the movie focuses on his sacrifices and work spent training tennis stars Serena and Venus Williams (who happen to be executive producers) from a young age, as well as the beginning of their rise to fame. Plus, Beyoncé’s featured song is nominated for Best Original Song for this movie (another performance to look forward to). Honestly, having Beyoncé write a song for your movie is the best award out there.

Disclaimer: this movie is about the romantic relationship between a fifteen-year-old child actor and a twenty-five-year-old woman who is looking to use his connections to become famous. It also features some extremely racist comments from a white man pretending to speak English with a Japanese accent. I sincerely hope this movie doesn’t walk away with the Best Original Screenplay award it is favored for. On a lighter note though, I think we can expect to be seeing more of the wonderful Alana Haim and Cooper Hoffman in the future.

Extremely gritty and drenched in moonlight, watching “Nightmare Alley” makes you wonder what illicit substances the makers of this movie were on. Despite not being as well-received as some of the movies it beat out for its slot as a Best Picture nominee (I’m looking at you “tick, tick…BOOM!”), Guillermo del Toro’s story about a circus performer who suddenly figures out how to make a ton of money as a mind reader is wild from start to finish.

“The Power of the Dog”

Once a predicted winner, Best Picture is no longer a sure thing for this movie, which is such a slow burn that the plot can’t be summarized without spoiling the ending. Let’s just say Benedong Cucumber stars as a cowboy who doesn’t like his new nephew-in-law. And then things get crazy. Set in beautiful New Zealand, Jane Campion is likely to become only the third female Best Director winner and would become the first woman to win it consecutively after another woman (Chloe Zhao won last year for Nomadland). So whether or not it wins Best Picture, there will be something to celebrate ;)

At this point, everybody knows the original West Side Story was racist. Steven Spielberg’s big solution to making his remake not racist? Casting Latinx actors in the roles of the Latinx characters. That’s literally it. The dialogue still ranges from obviously racist to (new! fresh! cool!) representing white colonizer narratives. Literally. The white Ansel Elgort (who, besides being horrible in this role, also plays a criminal) explains to a Puerto Rican character what something in Spanish means. Separately, he tells another Puerto Rican character that he needs to marry a Puerto Rican girl. Nice. Besides that, there is a transgender man featured prominently who is only properly gendered by the other characters when they want something from him. However, I must confess: the performances in this movie were (besides Elgort) phenomenal. Rachel Zegler as Maria is showstopping, and Ariana DeBose as Anita rightfully deserves the Best Supporting Actress trophy she is nominated for. Just. Please stop trying to fix West Side Story – it’s a lost cause.

Other Awards and Events of Note

Calling all “Twilight” fans: Kristen Stewart, up for her role as Lady Di in Spencer, is FINALLY receiving Academy recognition. Once the favorite for Best Actress, the race has been blown wide open, so definitely tune in to support our girl, now all grown up :’)

Billie Eilish and FINNEAS, the favorites for Best Original Song, will be performing “No Time to Die.” This girl is already more successful than I could ever dream of being, and I am here for it.

For the first time ever, there will be a new “Popular Film Award” that people have been able to vote for on Twitter. Maybe it’ll go to “Spider-Man: No Way Home.” Maybe it’ll go to “Shang-Chi and the Legend of the Ten Rings” or Camila Cabello’s “Cinderella.” Will the Academy embarrass itself? Rig the vote? Only time will tell.

Whether (or not!) you end up watching any of these films, I hope this list has given you somewhat of an idea of what will happen on Sunday. If not? Tune in next year for even more Academy shenanigans.