At the End of the Shining Path 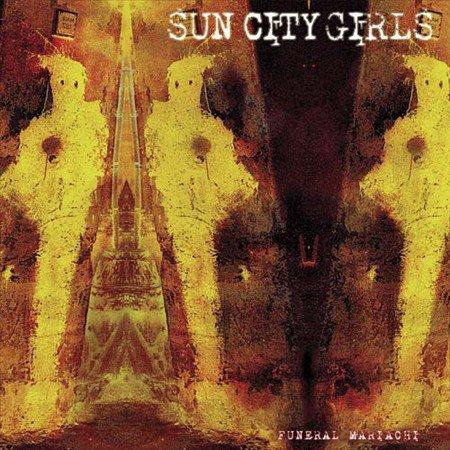 "Funeral Mariachi" is the final album by enigmatic trio Sun City Girls, completed just before the death of percussionist Charles Gocher and the band’s subsequent dissolution in 2007. Collected here are the last transmissions from the outer reaches of their wilderness, a whispered epilogue for a testimony that was often so loud no one seemed to hear it at all. Spanning three decades and countless releases, the Sun City Girls’ project seems, now, less a musical enterprise than a sort of cipher, a drunken map of the American unconscious, born of a perverse iconoclasm, a militant sense of autonomy, and a quasi-religious pursuit of the unity of art and life. Wildly experimental, their music synthesized—through entropy, violence, parody, and a half-ironic sense of the divine—rich and often divergent Eastern and Western musical traditions alike: touchstones include raga, vaudeville, free jazz, folk, and psychedelic rock.

Mastered by the band’s surviving members—the brothers Alan and Richard Bishop—"Funeral Mariachi" isn’t an epitaph for Gocher. To the extent that it’s possible to discern credit on any of the band’s records, the late percussionist’s role in the group seems, here, already diminished. Gone are his savage, spoken-word monologues, his deadpan threats, the oaths—obscene and barely coherent on "Dante’s Disneyland Inferno" or "The Handsome Stranger"—of a man who seemed convinced that he was already dead. As if chastened by their partner’s growing absence, the Bishops have reigned in their aggression and their penchant for caustic improvisation, crafting instead a work foremostly of concision and startling, elegiac beauty.

Overtones of the Near and Far East—thematic referents to which the band’s work returns frequently—appear early on, in "Black Orchid," where incantations in a plausibly sub-continental dialect unfold against a spare arrangement including a ‘found’ sample of a young woman’s hypnotic siren-wail. "This Is My Name" continues much in the same way, with a hushed, spartan arrangement and lyrics that seem to profess a sinister interpretation of reincarnation: "When I was dead I looked just like you / Now I’m alive where nothing is true." Anomalously schizophrenic opener "Ben’s Radio" switches between possessed-jingle and acid-lounge groove, mimicking the crawl down a radio dial and calling to mind Alan’s field recordings for the Sublime Frequencies label in Africa and the South Pacific. "The Imam," the centerpiece of this progression—and of the album proper—brings Richard’s skills as a fingerpicker to the fore, opening with an eccentrically staccato guitar passage that gives way to a trance-like fugue of voices chanting what seems to be a prayer or mantra as it climbs towards ecstatic transcendence.

From here, "Funeral Mariachi" performs something of a structural about-face. The album’s spare second half plays more ominously, more loosely. Lyrics are as rare as they are cryptic—nearly half of the album’s 37 minutes are instrumental. The fulcrum is "Vine Street Piano," a dreamlike tape-recording of a melancholic piano sample, originally written for the soundtrack to "Mister Lonely," a film by Harmony Korine. The invocation seems appropriate. Korine bears a relationship to his industry analogous to that of the band: one of self-styled exile and opacity. Moreover, songs like "Blue West," "El Solo," and "Come Maddalena"—whose spaghetti western flare call to mind the more adventurous work of Ennio Morricone—sound of a piece with a soundtrack to a film that was never made.

However strange, the shift is a sophisticated one, made all the more so by the mysticism implicit in the album’s opening tracks. The symbolism of the lone gunman—the pilgrim, the seeker of profound truths (signifying Gocher, if one is sentimental enough)—is transfigured here. These are sleepwalking songs, marching—however beautifully—toward ragged and inauspicious ends. The title track revels in distinguishing itself among a group of songs that, paradoxically, seem cut from identical cloth. Either the traveler’s end is the same as his beginning, or the difference has ceased to be important.

It’s fitting that this album—what we can only imagine is the chronological terminus of Sun City Girls’ activity together, bootlegs and errata notwithstanding—should constitute such a haunting anti-catharsis. From a band that, time and again, rejected any notion of celebrity, that subverted conventions of taste and artistic integrity, that treated their audience as ambivalently as their perceived critics, this last act of denial manifests "Funeral Mariachi" as an end that never acknowledges itself. It is a record that continues after it stops playing, that continues to wander in search of a modest and silent place on the horizon of a world where resurrection is still possible.

—Staff writer Ryan J. Meehan can be reached at rmeehan@fas.harvard.edu.