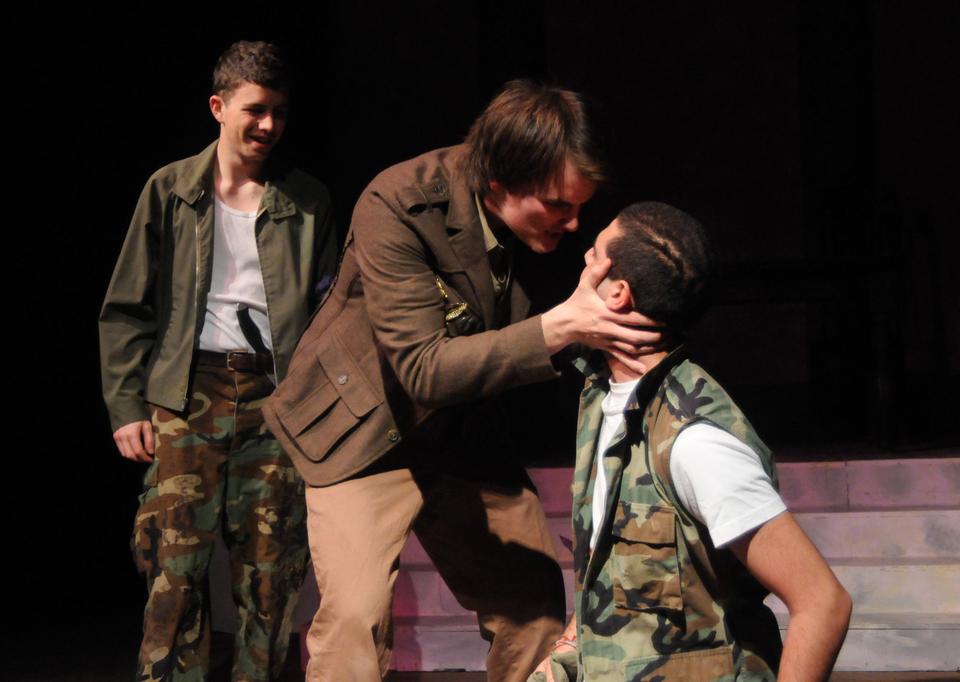 Directed by Joseph G. Hodgkin ’12, the Hyperion Shakespeare Company’s production of “Antony and Cleopatra” takes William Shakespeare’s classic tragedy of ill-fated sexual and political liaisons and vivifies it with strong acting and truly brilliant theatrical effects. The show, which opened on Friday in the Loeb Experimental Theater and will run until November 6, draws upon such a rich array of creative elements that it breathes new life into the long and verbally complex text.

“Antony and Cleopatra” tells a fairly standard story of romance complicated by politics. Antony, a ruler of Rome, engages in an illicit love affair with Cleopatra, the queen of Egypt. Following the death of his first wife, Antony marries Octavia to ease political tensions within Rome, to Cleopatra’s great jealousy and ultimate demise. The political nuances and shifting power relations that compose the plot are secondary, however, to the dazzling theatricality of the production.

Before a single line is even uttered, the play awes, for its majestic, multi-tiered set manages to capture the distinct spirits of two great empires. Dull gray walls, linear Doric columns, and hard black wooden furniture evoke Rome’s austerity, while Alexandria’s luscious exoticism is celebrated with a rich red velvet chaise, golden goblets, and a brightly-painted backdrop of papyrus in shades of warm gold and verdant green. Perhaps most impressive is the tall, glowing obelisk which looms above Egypt, illuminated from within to reveal an expanse of haunting hieroglyphs.

Just as the actors enjoy a visually rich backdrop for their performances, so too is this aesthetic echoed in the play’s costumes. Cleopatra (Sara S. Lytle ’13) is all sparkles, often bedecked in floor-length gowns in shades of royal purple, thick layers of necklaces roping her neck and softly tinkling bangles announcing her every movement. Likewise, her faithful attendants Charmian (Susanna B. Wolk ’14) and Iras (Rachel V. Byrd ’13) consistently frame their queen’s sartorial grandeur with their own exotic costumes. With long robes cinched by leather studded belts and sandals in shades of metallic silver and gold, the two attendants infuse their Egyptian royal garb with a distinctly modern edge. In contrast to the opulent adornments of the Egyptians, all of the Roman characters are dressed in contemporary army fatigues, sporting cargo pants tucked smartly into heavy black boots. Likewise, the play’s Roman women are garbed in austere modern safari attire, their neck scarves and khakis as businesslike and practical as the Egyptian women’s heavy jewels are opulent and excessive.

In particular, Lytle takes full advantage of the lavishness afforded by her costume, inhabiting her sweeping, glittering robes with the power and the presence of the elegant queen she portrays. Constantly snaking her body, Lytle is lithe as a softly-swaying papyrus reed in moments of sensuous seduction, yet snaps like a viper to fierce, steely stiffness whenever her forceful will is met with resistance. Tall, thin, and acutely aware of her own sexual prowess, Lytle plays Cleopatra as a haughty, manipulative, jealous, and self-indulgent queen.

Like Cleopatra, the portrayal of Antony (Caleb J. Thompson ’14) evokes the spirit of a handsome, proud leader; yet Thompson plays his ruler as something of an emotionally-distant military man, whose external confidence and glory don’t quite translate to private complexity. And though distant and vaguely inaccessible as an individual character, Thompson comes to life during scenes with Lytle, as they possess excellent on-stage chemistry. Their interactions, both verbal and physical, capture the spirit of a passionate couple whose smoldering sexuality and violent anger are experienced with equal intensity.

Other notable performances include that of Emily B. Hecht ’11, who portrays Pompey, a powerful political rival of Antony and Octavian. Booming, larger-than-life, and ever in-control, Hecht entirely commands each scene she is in, whether delivering a threatening monologue to her enemies while her comrade films her in what eerily resembles a modern terrorist video, or drunkenly carousing on her ship with her newly-formed allies.

Also charming is Michael S. Segel ’14, who plays Alexas, a messenger to Cleopatra. Bright-eyed, baby-faced and delightfully perky, Segel and Lytle enjoy excellent comedic chemistry in a scene when the explosive, jealous queen must be informed that her lover Antony has just married Octavia (Georgina B. Parfitt ’13). Octavia, in turn, gracefully portrays the archetypical political wife: pearl necklace-choked, quietly reserved in manner, and deeply unfulfilled in her marriage, she is as somber and proper as her prim black dress.

In addition to its lavish costuming and sets, the play incorporates a number of creative and daring technical elements. On three occasions, brief videos of fighting animal pairs are projected onto the stage, depicting violent battles between various forms of dangerous Egyptian wildlife, such as scorpions, scarabs, and crocodiles. The music is also well-chosen, alternating between haunting Near Eastern melodies of mysterious strings and airy flutes, and loud, rough gunshot sounds to signal the arrival of enemies during war scenes. Interestingly, both acts of the play begin with brief dance interludes featuring Cleopatra’s two attendants, whose swaying and intertwining beckon the audience to join them in their exotic land. In the play’s famous closing scene, Cleopatra’s tragic suicide is electrified by the use of a live snake, whose unpredictable slithering through the actors’ hands is nothing short of riveting.

At roughly two and a half hours, the play is rather long and its adherence to the original Shakespearean text can make it verbally hard to follow at times. But even its length and somewhat complicated plot cannot obscure the brilliance of the actors and technical elements that interweave to create a truly rich and engaging performance.

-Staff writer Clio C. Smurro can be reached at csmurro@fas.harvard.edu.