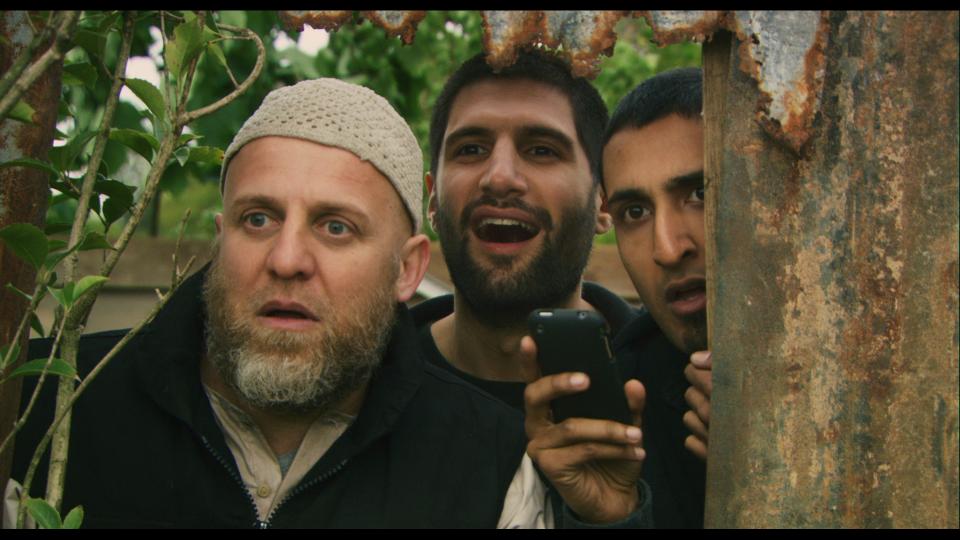 “Four Lions” follows a quartet of bumbling would-be terrorists as they attempt to form a cell and plan attacks. The comedy was directed by Christopher Morris, creator of “The Day Today.”
By Daniel K. Lakhdhir, Crimson Staff Writer

“The way to stop the Feds tracking you is very simple,” one aspiring jihadi tells another, “You eat your SIM card.” In “Four Lions,” a British comedy that details the misadventures of four wannabe terrorists, the sheer stupidity of the four is the source of most of the humor. Laughter and terrorism may seem an incongruous mix, and the very premise of the film is liable to induce shudders in some more politically-correct viewers. But “Four Lions” doesn’t shy away from controversy, presenting a world in which the terrorists seem no worse than any other character. Neither excessively moralizing, nor entirely amoral, “Four Lions” seeks to show its audience that terrorists are people too—and not smart ones. It also successfully overcomes the seeming contradiction between comedy and terrorism, imbuing its social commentary with plenty of black humor, whiplash verbal exchanges, and dramatic flair.

“Four Lions” is the tale of Omar (Riz Ahmed), Waj (Kayvan Novak), Barry (Nigel Lindsay), and Hassan (Arsher Ali), four Britons with abstract ambitions to martyr themselves and a knack for getting into trouble along the way. The film chronicles their desperate, misguided attempts to blow themselves up, including an ill-fated trip to an Al Qaeda training camp in Pakistan that ends when Omar accidentally fires a rocket-propelled grenade the wrong direction and annihilates the camp. The plot is loose and the characters rarely seem to make any forward progress, yet the peculiar tension bestowed by the knowledge that the protagonists, incompetent as they are, intend to commit mass murder, ensures that the film never feels meandering.

The four main characters take their cues from several broad, comic archetypes: Omar, the wise-cracking but apparently sensible leader; Waj, the child-like sidekick whose vision of heaven is the “rubber-dinghy rapids” ride at British theme park Alton Towers; Barry, the not-so-wise older firebrand who advocates blowing up a mosque to kick start the “final jihad”; and Hassan, the wide-eyed new convert. But all four embrace their roles with enough panache to elevate them above the level of caricature. Omar in particular combines his sharp tongue and terrorist aspirations with a seemingly idyllic home life—albeit one in which he uses “The Lion King” to teach his son the virtues of jihad—creating a character just confused enough to be believable.

The entire cast benefits from the screenplay’s razor-sharp wit. Jesse Armstrong and Sam Bain, who wrote the script along with director Christopher Morris, previously served as writers for cult television political comedy “The Thick Of It,” and the profane banter which was that show’s trademark translates well into “Four Lions.” The film’s dialogue combines the profound and the ridiculous to brilliant comic effect—as when Omar decries Britain as a “who-gives-a-fuck-about-dead-Afghans-Disneyland.”  These crackling back-and-forths —most frequently between Omar and Barry as they struggle for leadership of their makeshift terrorist cell—lend the film much of its propulsion.

Another clear influence on the film is the director’s past work. Morris made his name with fake news programs like “The Day Today,” which mercilessly lampooned the media’s proclivity for exaggeration and hysteria. The media is a constant presence in “Four Lions,” both in its themes and its cinematographic style. The hand-held camerawork—which is integrated into the film itself when the terrorists use similar cameras to record their escapades—suggests not just a documentary style but the news media reports Morris once parodied.

In part, he’s poking fun at the U.K. media craze over “homegrown terrorists.” As the film progresses, however, it becomes apparent that Morris has a bigger goal in mind. “Four Lions” provides little direct political commentary; there is essentially no background information about the terrorists, and audiences are left to speculate about their motives and the source of their radicalization. However, like “The Thick Of It” and “The Day Today,” the film uses absurdity and exaggeration—within an incongruously documentary aesthetic—to draw out society’s failures.

“The Thick Of It” targeted politicians, and the “The Day Today” lampooned journalists. “Four Lions” aims more broadly, highlighting the imbecility of terrorists, police, and average citizens alike.