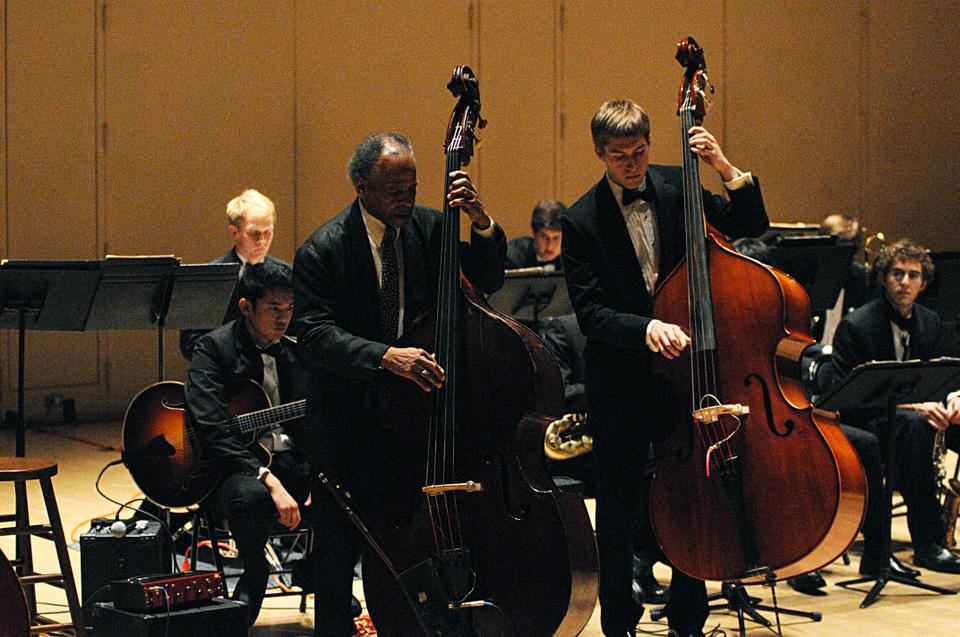 Organized by the Harvard Jazz Bands and the Office for the Arts, “Walking the Bass Line: A Tribute to Milt Hinton” featured jazz bassist and guest of honor Cecil McBee. By Allie Stote
By Sarah S. Zhang, Contributing Writer

The double bass doesn’t usually get the solos in jazz, but it was this instrument that took center stage during the concert “Walking the Bass Line: A Tribute to Milt Hinton,” the culminating performance of a three-day event honoring the great musician and photographer.

Called the “dean of jazz bass players” by the New York Times, Hinton was one of the most prolific and respected bassists in jazz.

The tribute, which ran from November 4-6 and was co-produced by the Harvard Jazz Bands and the Office for the Arts, also included a conversation with Grammy Award-winning bassist and guest artist Cecil McBee, an exhibit of Hinton’s personal photography, and a screening of the documentary  “Keeping the Time: The Life, Music and Photographs of Milt Hinton.”

Director of the Harvard University Band Thomas G. Everett, who has been instrumental in bringing professional jazz musicians to Harvard since the early 1980s to encourage collaboration between professional musicians and students, says that recognition for the late Hinton is long overdue. Since the role of the bass in jazz is usually to hold down the beat, or in the words of McBee “to make it swing,” its presence is vital but not showy. Despite the bass’s predominantly supporting position during performances, Everett says that Hinton has made an invaluable contribution to the genre.

“Whatever ensemble or band Milt Hinton played with, he brought something special to it without drawing attention to himself,” he says.

Everett adds that Hinton, also known as the Judge, was considered a musician’s musician.

“He would very modestly say that his job was just to make other people sound better, though I think he did more than that,” he says. Some of the famous musicians he collaborated with included jazz greats such as Louis Armstrong and Duke Ellington.

In addition to his storied musical repertoire, Hinton was also a talented amateur photographer, capturing on film the very jazz musicians with whom he played. On display at the Holyoke Center through December 8, his photography expresses a fluid blend of his hobby and musical profession.

In the 60 years of his career, he took over 60,000 candid photographs of musician friends on the road and in the recording studio.

Guest of honor McBee’s own musical career builds on top of Hinton’s legacy. While they represent different eras in jazz, McBee only has praise for Hinton’s musical ability. “Out of many tonalities, [a bassist is] responsible for choosing the perfect jewel. Milt Hinton was absolutely genius at that. His choices of tone were all select jewels.”

In addition to participating in the tribute’s public events, McBee, who is an accomplished composer and teacher as well as a renowned performer, was also on hand to personally teach and rehearse with the student musicians of the Harvard Jazz Bands.

Citing one of the reasons why he wanted to bring McBee to campus to interact with undergraduates, Everett says, “Cecil is a master teacher.”

McBee worked closely with members of the band in the days leading up to the concert. At rehearsals, the group played from pages of music handwritten by McBee. “Cecil has been a catalyst for us,” says Alex J. Rezzo ’11, a tenor saxophonist and co-manager of the band.

“When he plays the bass, it’s just a completely different feeling,” Rezzo says.

Apropos of the concert’s name, Saturday evening’s “Walking the Bass Line” prominently featured the bass. The program included both renditions of well-known recordings by Hinton and McBee’s original compositions.

McBee began the second half of the concert with a solo improvisation and then played several songs with the students of the band. The evening ended with a performance of McBee’s piece “U Phoria” in an arrangement that was especially commissioned for the night.

Though jazz may not be the most popular musical genre blasting on campus, the three days of event have shown that jazz has a place at Harvard. As McBee says, “Music performed well will touch souls of all ages.”