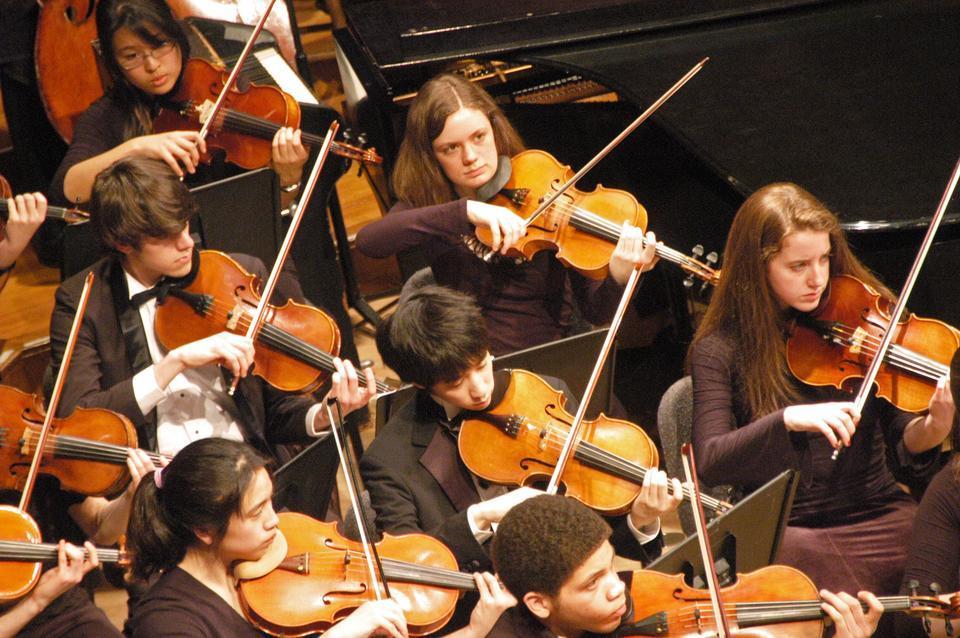 Members of the Harvard Radcliffe Orchestra perform pieces from Chopin, Brahms, and Kirchner in their third concert of the season in Sanders Theatre. By Divya Kishore
By Alyssa A. Botelho, Contributing Writer

Sanders Theatre was filled with rich, textured harmony last Friday evening during Harvard-Radcliffe Orchestra’s (HRO) third concert of the 2009-2010 season. Under the baton of Federico Cortese, a senior lecturer in the music department, Harvard’s largest orchestra exemplified its virtuosity with its program of Chopin, Kirchner, and Brahms.

The first piece of the evening, Chopin’s Piano Concerto No. 1 in E minor, featured the HRO concerto competition winner and internationally distinguished pianist Kenric Tam ’12. With the orchestra’s bold opening and the emergence of the lyrical second theme, beautifully introduced by flautist Irineo C. Cabreros ’13, Tam took to the stage with breathtaking expression. Though the orchestra’s complementation of his performance was not perfect at times, Tam displayed a uniquely sensitive and heart wrenching interpretation of Chopin’s first piano concerto. Especially striking during the second movement, Tam’s phrasing evoked a tender fragility that lingered in the theater even with the swell of the orchestra behind him. Tam’s artistry in no way overshadowed his technique during this notably difficult concerto—he presented strength and articulation in the intricate fast passages of the third movement until the concerto’s robust conclusion.

Cortese took a moment before the second piece, Music for Orchestra II, to commemorate its composer Leon Kirchner. Kirchner, who passed away last September, was a professor in the music department from 1961 to 1991 and conducted Harvard musicians and orchestras around the world. Though far removed from the romantic lyricism of Chopin’s Piano Concerto No.1, Music for Orchestra II was distinguished in its own right. The fiery piece united the strength of brass, percussion, and the raw chords of the strings, echoing the music of Stravinsky and Schoenberg. The piece was a worthy tribute to Kirchner, who Cortese said was “an extraordinary musician, filled with energy, enthusiasm, and a sense of humor and irony.”

The evening could have had no better finale than Johannes Brahms’ Symphony No. 3 in F major. Cortese skillfully guided the interplay of violins, cellos, French horn, and oboe through the thick harmonies of the first and second movements. The highlight of the evening’s performance was undoubtedly the third movement, with a hauntingly poignant melody that does not easily leave memory. Driven by the orchestra’s momentum, Cortese led the fourth movement to the evening’s positively triumphant conclusion.

The night of Chopin, Kirchner, and Brahms required musicians of high caliber. Not only did the student musicians demonstrate this necessary technical skill, they exemplified a maturity of interpretation far beyond their years.