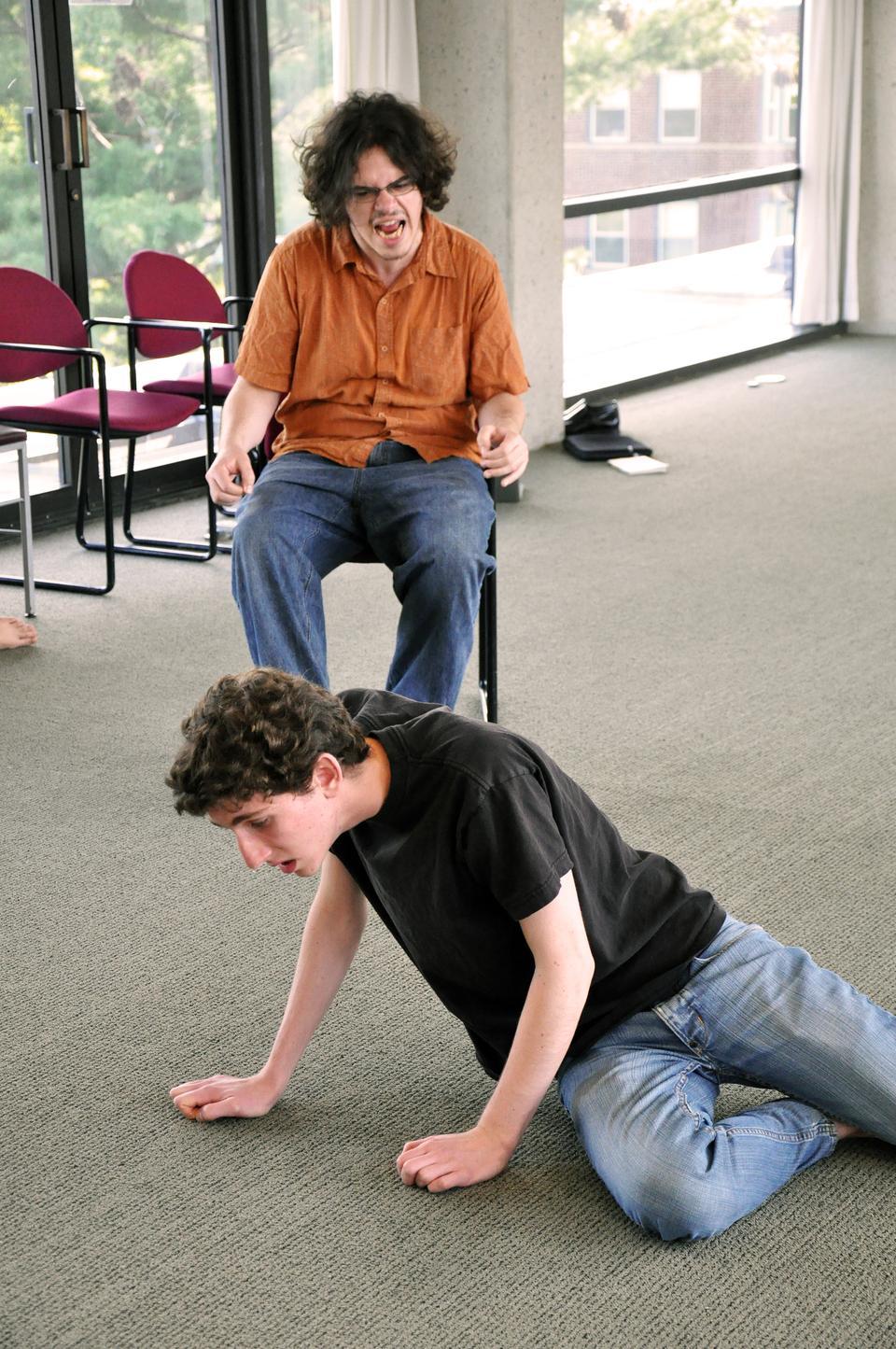 Joseph G. Hodgkin '12 and Michael Handelman rehearse a scene for "Pericles", which will be playing in the Adams Pool Theater through Saturday, May 1st.
By Alyssa A. Botelho, Contributing Writer

On its website, the Harvard-Radcliffe Dramatic Club describes William Shakespeare’s “Pericles”—written in part by the much less eloquent George Wilkins—as a “rarely produced tragi-comic-histori-vulgar monstrosity of the Shakespeare canon.” A late and obscure work, “Pericles” tells the story of the eponymous prince of Tyre. According to Meryl H. Federman ’11, producer and president of the Hyperion Shakespeare Company (HSC), Pericles “is the great guy that horrible things happen to.” She continues, “In that sense, it’s kind of a dark, weird fairy tale.”

“Pericles,” the HSC’s annual spring Visiting Director’s Project, will be playing at the Adams Pool Theatre from April 29 to May 1. Each year the company invites a professional director from the Boston area to select and direct a Shakespeare play. This year’s pick is Adam Stone. “Adam absolutely gets this play, and knows how to use humor to really bring out the absurdity of the script,” Federman says. Stone saw potential in the tension and energy of Shakespeare’s and Wilkins’ joint work. “The script poses a lot of problems right off the bat, and the cast and I necessarily rose to the challenge to come up with exciting solutions,” he says.

Noah J. Madoff ’12, who plays Pericles, stresses that an innovative play like this one needs an innovative director. “This play has a cluttered, bizarre script that doesn’t follow the rules of normal Shakespeare—but Adam has been fearless in editing, cutting, and reworking the production,” Madoff says. Stone adds, “I just developed the production word for word from the script based on the images and references that filtered into my mind and that of the cast.” In addition to directing, Stone also sound-designed the entire production. “You will hear everything

from heavy metal to seductive songs,” Madoff says. Stone even extended his creativity to the props. “At one point, a microwave and a ‘soup-in-hand’ will appear on the stage,” Madoff says.

Stone also places importance on the ideas of his cast. “The ensemble process is very important to me,” he says, “and I casted students who could bring something unique to the final production.” Madoff notes that Stone is skilled in bringing out the best in his cast. “Adam is remarkably good at extracting from the script—and from us,

the actors—layers of meaning and context that you won’t necessarily see in the shallow, episodic plotline,” he says. Federman agrees: “We may not have had a promising production under different leadership, but Adam is the kind of director who can get people excited about a Shakespeare play, and an obscure one at that.”

Though “Pericles” has its dark moments, it is ultimately a comedy. “Pericles is just a normal guy who encounters the wackiest of the wacky, and humors us all as he navigates through the horror show of his travels,” Federman says.