Burka in the French and American Minds 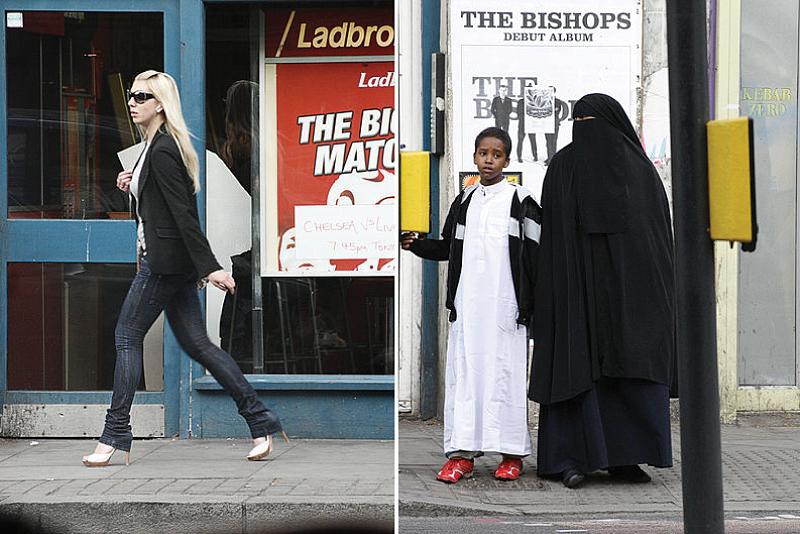 Fierce has been the uproar surrounding the French National Assembly’s recent efforts to outlaw the wearing of the burka (a full veil that masks a woman’s face and body, worn by some Muslim women). Although France has so far only managed to pass a non-binding resolution that calls the burka contrary to French republican values, many say a full ban is not far away.

Many Americans find such a prohibition distasteful. Their first argument has been that some women, for all we know, really do want to appear so garbed in public. They feel that it’s just as tyrannical for a non-Muslim majority to force Muslim women not to wear the burka as it is for Muslim men to force Muslim women to wear it.

By contrast, some French anti-burkists argue that wearing the burka could be a safety hazard while driving at rush hour on crowded highways, for example. Likewise, if the burka remains legal, hardened non-Muslim criminals disguised as Muslim women could then be able to commit any number of crimes with great impunity. (Apparently, one such crime has already occurred.) Others have argued that because the French state outlaws walking down the street in the full monty, why can’t it outlaw its exact opposite? Yet another and more interesting argument has to with feminism and human rights: All of us would agree that wanting to be someone else’s slave is unnatural. No woman in her right mind, runs the argument, can truly want to wear a burka; and even if she thought she did, humanistic states and societies should everywhere forbid this nefarious practice. Our faithful neo-Marxist friend—false consciousness—is very useful here.

Interesting statements, then, but the arguments that matter most to me are those that have to do with the French and the American definitions of freedom, politics, and social order.

To illustrate how different these definitions can be, we can look to some important and recent issues on which French and American views have differed completely. This past year we were reminded that millions of Americans thought that access to medical care was an earned privilege and not a universal right. In this same mode, as is well known, the right to an education is likewise not guaranteed by the United States Constitution. Very few French people think about medical care and education in this manner.

In brief, the French and American republican traditions are both children of the Enlightenment but they are not alike. They both defend the rights of individuals, the one with “liberty, equality, and fraternity,” and the other with “freedom and justice for all.” But they don’t do it in the same way.

American Republicanism is focused on the defense of individual political rights against a distant, inefficient, and predatory state. The Founding Fathers did not particularly want to kill King George. They wished merely to ignore him. Nor did they wish to turn American society upside down: Revolutionary Americans, like most Americans today, basically thought that their quasi-stateless society was working just fine. (Well, sort of, in any case.) The American Revolution was not about social change, and it is very suggestive that American Common Law went through the Revolution basically unaltered. Individual rights are the key to the soul of American politics and so it is that the 10 amendments are an essential ingredient of this individuating view of politics.

French history has been differently configured. The French Revolution’s emphasis was less on liberty than it was about equality and fraternity in a “regenerated” social world. Individuals had rights, of course, but these rights were to find their true meaning, or so the French revolutionaries supposed, in a highly communitarian definition of what citizenship should be. The idea of free-standing pioneers and lonesome cowboys struggling on alone in distant places on some lonely trek has no place in French folklore. And while the Revolution was not as successful as its early proponents had hoped, some of that publicly defined universalism from 1789-1794 survives in French consciousness to this day.

For an American sensibility, the issue has to be seen from the point of view of individual rights: If women want to wear this cloak, they have a perfect right to do so, even in eyes of those Americans who are most hostile to foreign ways of living. It matters not whether these women wear the burka in public or in private, because their “rights” are the same. However, public space in the French scheme of things is not just a non-private and therefore public space by virtue of default. It’s a universalist space where citizens interact. From a French perspective, refusing to show your face in a public space is a refusal not just of custom, but of interactive citizenship.

And now: What then to decide? Alas, for myself, I just can’t conclude.

In the olden days of yesteryear, Democratic Party stalwarts responded to Senator Goldwater’s plea (“In your heart, you know he’s right”) with a crisp “But in your head, you know he’s nuts.”

Well, in my head, I know that Muslim women should everywhere be allowed to wear the burka. Of course, some will surely do so because they are victims of unpleasant patriarchalism. But then again, in Western culture also, many fathers drive their daughters to distraction and many domineering men drive uncertain women to drink and despair, but we’ve learned to live with many such injustices and inequalities.

In my head and in my heart, full as it is with the memories of a French childhood, I do so dislike the burka that outlawing it in France seems to me to be more or less acceptable, even if that should not be the case in the United States. It has no place in French life and history, and outlawing the burka might well have been one of the very few items of public policy on which Robespierre and Marie-Antoinette, or Joan of Arc and the Marquis de Sade, would have readily agreed.

Conclusion? Is it, as David Hume put it so pithily, that “reason is and for ever should be the slave of the passions?” Yes, surely so. But then again, if that is indeed the case, if this rejection of the burka makes passionate sense for me, how will other passions work out for devout Muslims of both sexes, wherever they may be?

Patrice L. R. Higonnet ’58 is the Goelet Professor of French History at Harvard. He is a member of the Center for European Studies.