The Thermals Stuck In Uninspired Limbo 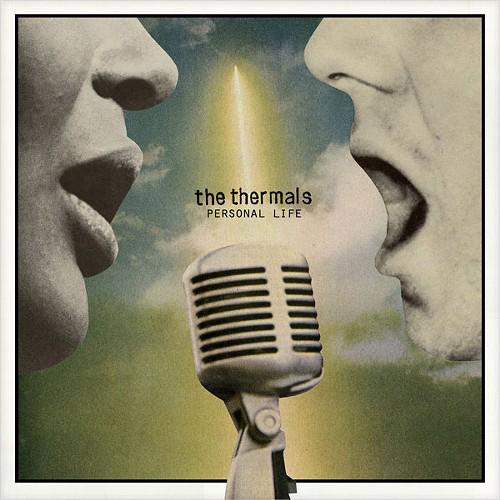 The best tunes by Portland indie-punk outfit The Thermals are defined by their tempo. Early highlights like “No Culture Icons,” from their 2003 debut “More Parts Per Million,” have a chugging intensity, and sound like the band members are consciously restraining themselves from playing 20 or 30 beats per minute faster. The Thermals’ songs are actually a good deal slower than many of their punk contemporaries, but the barely-restrained frenzy of their first three albums complemented their politically-oriented lyrical venom.

During their recent career, the band has moved away from the themes that previously gave their music its drive, and their new album “Personal Life” feels like a culmination of that change. 2009 release “Now We Can See” was The Thermals’ weakest yet, as the band seemed to outgrow the ferocity that was their best quality. Political messages were watered down or eliminated and band members were suddenly perfectly content to play at a more moderate pace. If this shift, which might be due to the mellowing effects of age, had been accompanied by some development in style or tone, “Now We Can See” could have been a graceful maturation for The Thermals. Instead, the group followed the formula of their previous three albums, but without their urgency—a critical flaw. Listening to “Now We Can See,” for long-time Thermals fans mostly just resulted in an urge to listen to earlier, better material instead.

Thus, the question for their fifth effort, “Personal Life,” is whether the band can complete their difficult transition from angry young punks to sophisticated adult alt-rockers. The opening track “I’m Gonna Change Your Life” does not bode well for this objective, beginning with an unhurried three-chord guitar line, which ambles rather than propels. “I’ll keep you warm at night,” lead singer Hutch Harris moans plaintively in the verse, yet “I’m Gonna Change Your Life” has little of the raw emotion that characterized earlier Thermals albums.

Many of the songs on “Personal Life” seem stuck in limbo. Neither vitriolic punk nor fully-fledged rock, they combine elements of both, and the most frequent result of this amalgamation is a peculiarly limp version of the former. “Only For You,” best described as a punk ballad, exemplifies the album’s existential confusion, mashing the band’s newfound interest in romantic themes with a decelerated, thumping drum-and-bass background which is at odds with the song’s subject matter. Other similarly premised songs, like “Your Love Is So Strong,” suffer from the same disconnect. The Thermals’ ideas have evolved but their music has been left behind—and they seem unable to muster up the same passion about their titular personal lives as they did about corrupt governments and unfair gods.

Fortunately, The Thermals still have their knack for beguiling instrumental hooks. This skill redeems tunes like “Never Listen To Me,” an uncomplicated, riff-driven number which strips down the band’s sound to its basic components: one or two memorable guitar lines and Harris’s distinctive yowls. The best tracks on “Personal Life” all take this back-to-basics approach—the punk aesthetic minus the punk sound.

Listening to “Now We Can See” elicits nostalgia for the noisier, angrier Thermals of old. “Personal Life” is even more frustrating, combining that same nostalgia with a sense of unrealized potential in tracks like lead single “I Don’t Believe You,” in which spacious guitars back one of Harris’ most heartfelt vocals: “Say you’re going through a phase / you’re just acting your age / I don’t believe you.”

In “Personal Life,” The Thermals take tentative steps away from their roots with four-plus chord progressions and distortion-free riffs. But instead of defining a new sound for themselves, they land somewhere between the straightforward punk of their earlier albums and a dated rock sound that evokes 90s groups like Built to Spill. “Personal Life” is listenable but uninspiring, which for a once provocative, affecting punk band, is a harsh indictment.