Making Out a President's Character

The Gilded Age: A Profile of President Abbot Lawrence Lowell 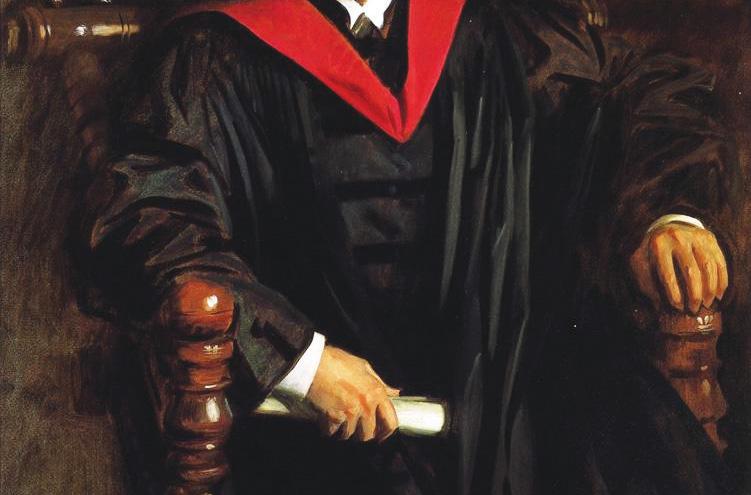 Making Out a President's Character
By Victoria A. Baena, Crimson Staff Writer

Hopes were high for Abbot Lawrence Lowell in 1909, as he stood poised to replace Charles W. Eliot, class of 1853, as president of Harvard. He was “the only real candidate,” wrote Jerome D. Greene, Secretary to the Harvard Corporation. Lowell’s ties to the University ran deep: He had graduated from the College in 1877, the Law School in 1880, and, since 1897, had served as a lecturer and then as a popular professor of Government.

In formulating his vision for Harvard’s future, Lowell signaled a need for both expansion and modification of his predecessor’s projects, and he instituted the system of concentrations and distribution requirements that has continued, in a modified form, into the present day. Lowell is also largely responsible for various additions to the physical face of Harvard, including Widener Library, completed in 1915, the Fogg Art Museum (renovated in 1927), and Memorial Church (dedicated in 1932).

But a fixation on Lowell’s tangible achievements belies the inconsistencies and controversies that plagued his career—and that for a long time were never officially denounced. The president cultivated a reputation as a progressive who sought to open Harvard’s resources to the local community—but he also tried to limit the enrollment of Jews and to restrict the experience of African-Americans students.

In one sense, Lowell was deeply tormented by what he saw as the stratified social experience of Harvard undergraduates. Wealthy New England prep school students lived in high style in private student residences along Mt. Auburn Street’s “Gold Coast,” while their less monied peers resided in the shabby dorms of Harvard Yard.

Lowell came to believe that a system of randomized freshman housing, followed by dispersion into upperclassmen houses, would be the best way to promote mingling among social classes. He saw in such an initiative the importance of having Harvard’s social makeup reflect the increasing diversity of the nation as a whole. However, Lowell’s philosophy of expansion and inclusion was undermined by his assumptions that Harvard had no place for social and racial minorities—indeed, by his assertion that these groups posed a threat to the university’s ability to thrive.

In May 1920, Harvard undergraduate Cyril B. Wilcox, class of 1922, committed suicide—shortly after confiding in his brother George, class of 1914, about a romantic relationship in which he was involved with Harry Dreyfus, an older Boston resident. Soon after his death, George received two letters from Cyril’s classmates, addressed to his brother and referring to a scene of homosexual activity at Harvard.

George went immediately to Dean Chester N. Greenough, who spoke with Lowell about the case. The president created a five-person body dubbed the “Secret Court” to investigate the affair, and the court ultimately declared 14 men “guilty” of

homosexual activity. Lowell directed Greenough to ask those implicated to leave the Harvard campus and the city of Cambridge at once. Before they could release the verdict, however, another student—Harvard Dental School student Eugene R. Cummings—had committed suicide.

Harvard never officially publicized the actions of what came to be known as the “Secret Court of 1920” under Lowell. The information only came to light, and then-President Lawrence H. Summers released an apology, following a six-month investigation and scrutiny published by The Crimson in 2002.

In other instances, however, Lowell’s discriminatory policies were less carefully veiled. Lowell had instituted a new admissions test in 1909, one that he hoped would draw students from outside the familiar contours of New England boarding and prep schools, helping shape Harvard into a more truly national university. A side effect of such a policy, however, was the increase in the Jewish population at Harvard—from six percent in 1908 to 22 percent in 1922.

In response, Lowell proposed to the Board of Overseers the limiting of Jewish enrollment to 15 percent of the student population. “The anti-Semitic feeling among the students is increasing,” Lowell wrote in a letter to Harvard graduate A.A. Benesch in 1922, “and it grows in proportion to the increase in the number of Jews.” The quota would, he claimed, help stem such prejudice.

The Board of Overseers unanimously overruled Lowell in 1923, but he managed to put his beliefs into action through other, subtler means. He proposed a new policy of admissions—adding letters of recommendation and an interview to assess “aptitude and character.” This policy, for Lowell, resolved what a quota was judged ill suited to do: by 1933, the percentage of Jews had shrunk to 10 percent of the student body.

Lowell employed similar logic in another controversial initiative: his attempt to ban African-American students from the freshman dorms. “We owe to the colored man the same opportunities for education that we do to the white man,” Lowell stated following student protests in 1922, “but we do not owe it to him to force him and the white into social relations that are not, or may not be, mutually congenial.”

In an era in which rapid social change was displacing the very foundation of previous ethical assumptions, Lowell was not exempt from the inconsistencies inherent in trying to formulate a coherent social paradigm. In many ways, he encapsulated the fundamental issues of the Progressive Era—an age in which social reforms meant to promote a democratic society existed side by side with nativist initiatives, which sought to deny to immigrants those same reforms. A growing emphasis on the ideal of democracy prompted earnest debate over who, exactly, was included in such an ideal.