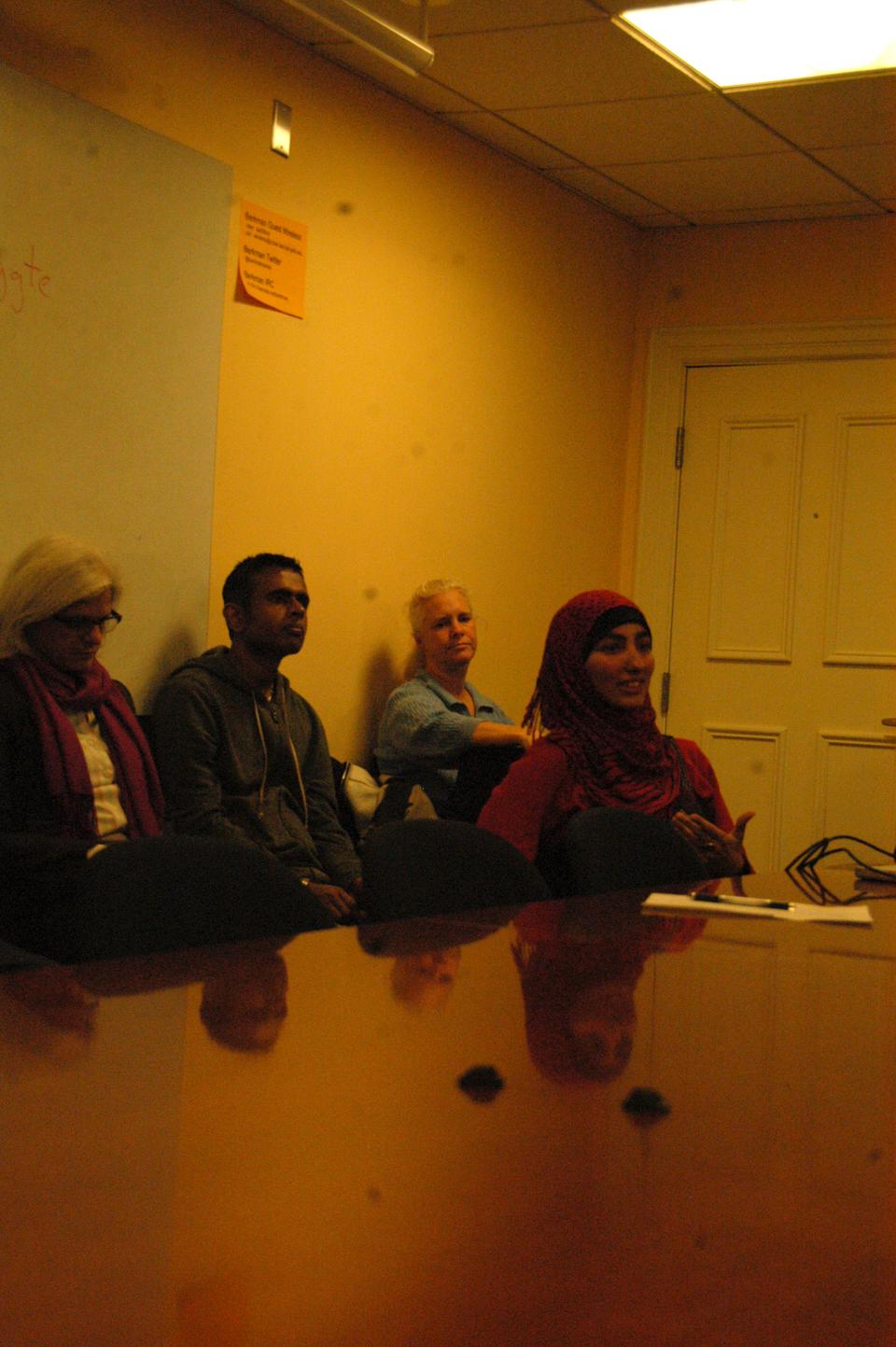 Human rights activist Shima'a Helmy, a main character in the documentary "Four Women, One Revolution" which follows her role in the Egyptian revolution, discusses her experience.
By Ethan G. Loewi, Contributing Writer

“If we have had a successful revolution,” said Shima’a Helmy, “why are all the revolutionaries being arrested and kidnapped?” Helmy, 21, is a human rights activist from Cairo who spoke last night at the Berkman Center for Internet and Society at a screening of “Four Women, One Revolution,” a short documentary about the Egyptian Revolution this year.

The event, sponsored by the Harvard Law Documentary Studio, gave the audience of 16 people a chance to hear from and talk to Helmy and journalist Micah Garen, one of the film’s directors.

The film, which follows the stories of four middle-class Egyptian women during the dramatic political upheaval, emphasized that the Egyptian struggle for democracy is far from over. According to Garen and Helmy, the Supreme Council of Armed Forces remains extremely powerful in Egypt and continues to maintain a military dictatorship despite the resignation of former President Hosni Mubarak.

“If you accept that the revolution is over, you’re safe. But if you’re part of the ongoing struggle, you’re a target,” said Helmy, who is one of the four women featured in the film.

The documentary and discussion cited many examples of protesters and bloggers who have been arrested, imprisoned, injured, or killed by forces under the control of the Egyptian military. According to Helmy, SCAF employs “paid thugs” whose primary responsibility is violently dispersing protesters.

According to Garen, one of the most “draconian” and pervasive practices to come out of the Egyptian uprisings has been holding military trials for civilians, which enables the military to dispense “almost any punishment they want to.”

More than 12,000 people have faced military sanctions since the Egyptian Revolution began in earnest last January, and over 9,000 have been convicted—often for crimes like “blogging,” Garen said.

Garen added that those accused of more violent crimes, including Coptic Christian protesters, are often the victims of SCAF-controlled media manipulation and fabrication.

“I never saw a Coptic protester with anything more dangerous than a walking stick,” Garen said.

One notable case that Helmy spoke of was that of Maikel Nabil Sanad, a Coptic blogger who was arrested in his home for writing a sentence that was perceived to be anti-military. He went on a hunger strike to protest his arrest, was then sent to a mental hospital, and has since been denied contact with his family, friends, and various media outlets.

But Helmy and Galen are committed to raising awareness, continuing media coverage, and promoting citizen involvement in the aftermath of the Egyptian Revolution. In particular, they asked viewers to call Congress and demand that the nearly $2 billion the U.S. gives to Egypt in annual foreign aid be restricted so that it cannot be used to fund military trials for civilians.

“A lot of what the army does to control society is through subtle mechanisms of fear,” said Galen, “and the best way to combat that is by speaking out against them.”