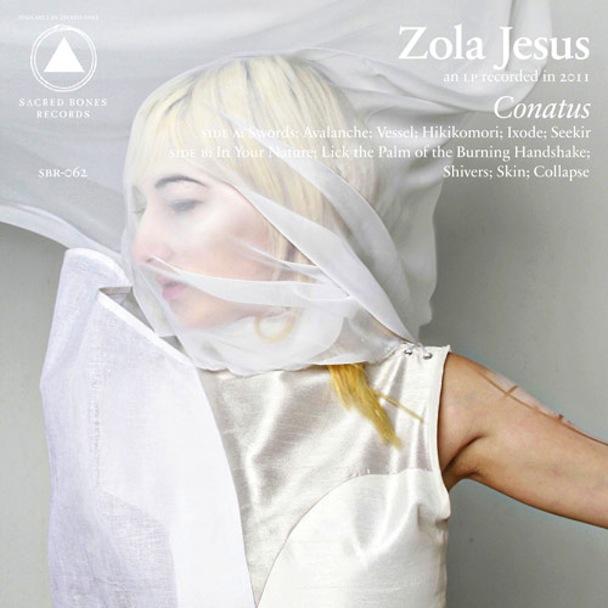 Perhaps the only description that could do Nika Danilova’s remarkably unique voice justice is the one provided by her strange moniker, Zola Jesus. Just as the figures of Émile Zola and Jesus Christ somehow seemed to fit together for her, so too do the blend of heavy studio production and almost operatic vocals on her latest album “Conatus, ” in which Danilova brings two disparate elements together into a lush, coherent whole.

Zola Jesus’s previous two albums were, in a certain sense, more straightforward. Danilova, operatically trained since childhood, let her throaty, raw-yet-velvety voice dominate the arrangements by keeping atmospherics and instrumentals minimal. Her third venture into an almost gothic style of somber rock marks the evolution of her style away from this sparse aesthetic. The shift is immediately apparent on opening track “Swords,” a wordless, thumping whirlpool, on which an echoing blend of percussion and synth builds and fades until Danilova’s hollow, background vocals are all that remain.

Danilova experiments heavily with production in “Conatus,” though her unmistakable, silky and commanding voice remains the most arresting feature of the album. Persistent bass and moody live strings pervade the majority of the songs, while electronic sounds allow Danilova to construct tracks that can intensify just as easily as they can dissolve. The manipulation of haunting background vocals and a relentless synth rhythm mark “Ixode,” an invasive track that wavers between insistent and sly. This duality of heavy production and a bare style, present throughout the album, fosters an alluring tension: “Ixode,” along with “Seekir” and “Avalanche,” could be either entirely danceable or soothingly elemental.

For the most part, though, Danilova expresses her emotions entirely through her impressive vocal range, which takes center stage while the contrast between spare and chaotic arrangements maintain the listener’s interest. “Hikikomori,” aptly named after a Japanese term for self-containment or pulling away, features an assortment of strings that grow increasingly frenzied. Danilova herself can express desperation through somewhat garbled lyrics— “Keeps me awake now / Keeps me arrested”—and enunciation that sounds reluctant, as if she were dragging each sound from her throat.

“Lick the Palm of the Burning Handshake,” which features arguably the most comprehensible lyrics of the album, retains that distraught quality even as Danilova allows her voice to mellow and warm on a sweeping melody. The lyrics themselves are not particularly revolutionary or exceptional, but Danilova’s voice becomes unexpectedly sweet and equally heart-wrenching, and it crafts a sense of beautiful melancholia that is increasingly dominant on the album. This gentleness is especially present on “Skin,” where a simple, unadorned piano accompaniment gently supports the ambiguous lyrics: “Safety net don’t hold me now / In this hole I’ve fallen down.”

Though the substantial production lends many of the songs more nuance, it occasionally sits uneasily, and serves more to occlude her brilliant vocals than to enhance them. On “In Your Nature,” the incessant percussion threatens to overwhelm all other aspects of an otherwise promising song. Closing track, “Collapse,” evokes its title by becoming overwhelmed with persistent synth effects, and it seems to have the same effect on the ear as a cheese grater would. Meanwhile, “Seekir” and “Shiver” encounter a different problem: a lack of the originality present in the other tracks. These songs simply continue the musical themes of the preceding numbers with little alteration, and fail to contribute anything significant to the album as a whole.

Danilova has built “Conatus” out of mostly effective production techniques, but her foundation remains in her consistently expressive voice. “It hurts to let you in,” she claims in “Collapse,” but after 40 minutes of showcasing her range, depth and versatility, it feels as if she has done just that.