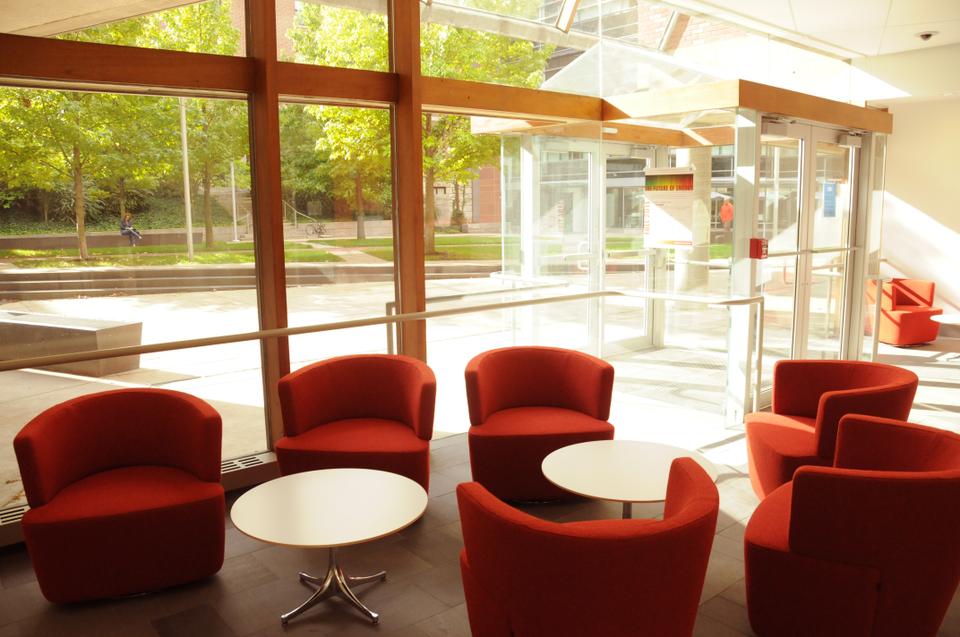 The Sherman Fairchild Biochemical Lab renovations include comfortable common rooms in all the floors
By Radhika Jain, Crimson Staff Writer

Professors in the Stem Cell and Regenerative Biology Department (SCRB) have moved into the newly-renovated Sherman Fairchild Biochemistry Building, marking the first time the building has been entirely devoted to stem cell laboratories since the consolidation was proposed in early 2009.

The department was slated to expand into the Allston Science Complex until construction on the site was halted after Harvard’s endowment plummeted during the 2008 financial crisis. SCRB now occupies the entirety of Fairchild and the adjacent Bauer Life Science Building.

Laboratories in the Department of Molecular and Cellular Biology, which formerly were housed in Fairchild, relocated to the Northwest Science Building last year and renovations to Fairchild additionally displaced a number of existing stem cell labs to temporary space in Bauer and Northwest.

These labs, joined by others from across Cambridge and Boston, moved back to Fairchild starting in August, according to Lee Rubin, Director of Translational Medicine at the Harvard Stem Cell Institute.

Rubin’s lab used to be split between multiple floors of Fairchild but has been consolidated onto one floor since he moved back on September 8. He said he has noticed a palpable improvement in his colleagues’ moods since then.

“The space is really fabulous,” he said. “I sort of underestimated how wonderful it would be to have everyone in my lab on the same floor.”

The shift brings many SCRB labs into closer proximity but does not represent total centralization.

Labs have vacated Northwest, according to SCRB Professor Jack Strominger, but some remain in the Conant Chemistry Lab, the Longwood Medical Area, and at Massachusetts General Hospital.

A few will share space between Fairchild and MGH, said Jennifer B. Shay, Lab Manager for the Musunuru and Cowan Labs.

“There are some professors that have more ties to MGH or are MD-PhDs,” Shay explained.

Still, not all of Fairchild is currently filled. A visit to the building reveals a buzz of activity as lab groups settle in—but also some rooms that are still empty.

“There’s still two or three spaces for new faculty members that haven’t been appointed yet,” said Strominger, confirming that searches are underway. “It takes time to find outstanding faculty.”

“It’s great to be able to grow into more space,” said Shay. “At MGH, I felt like we were already at capacity. All the benches and desks were filled.”

Nancy Poole, staff assistant for Associate SCRB Professor Konrad Hochedlinger and Assistant SCRB Professor Chad Cowan at MGH, will move to Fairchild as an administrative coordinator. Although she said that moving to Harvard was probably never a practical option for Hochedlinger, other researchers jumped at the opportunity for bigger and better spaces. Administrative offices and lab space are more integrated in Fairchild than at MGH, Poole added.

Rubin said he has heard nothing about SCRB moving to Allston in the future. Although he is confident that any space provided there “will be fabulous,” he added that he is happy with the department’s current accommodations.

“I like being in the center of things. Maybe I’m easy to please,” he said.

—Staff writer Radhika Jain can be reached at radhikajain@college.harvard.edu