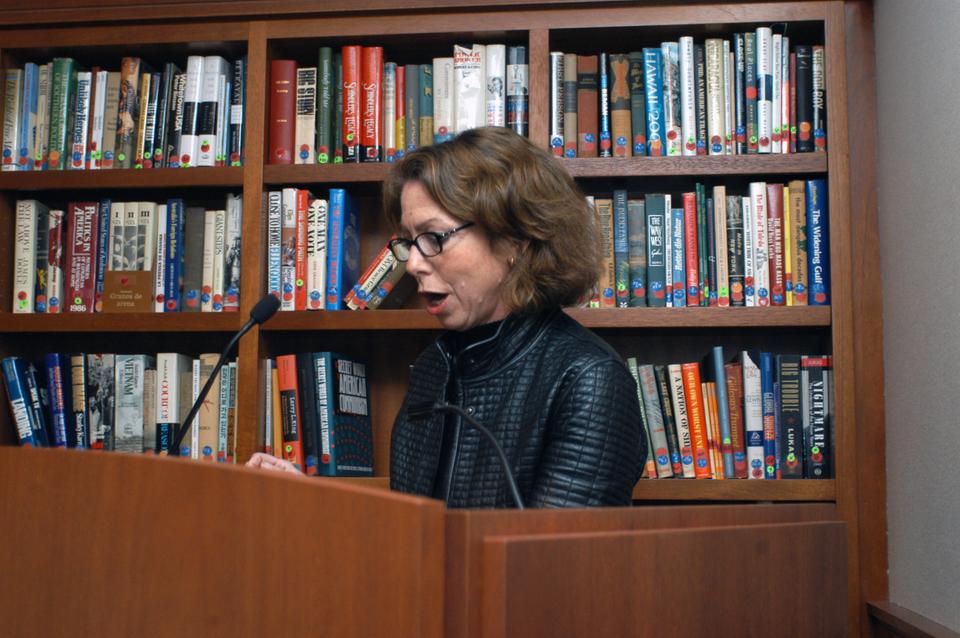 It was mid-afternoon already but Jill E. Abramson ’76 was just grabbing lunch.
By Erika P. Pierson

It was mid-afternoon already but Jill E. Abramson ’76 was just grabbing lunch. She entered the elevator clutching her clear plastic take-out container of no-frills salad from the sun-yellow New York Times cafeteria. A woman entered the elevator and offered Abramson congratulations on her promotion of two months ago, asking how the new job was going. Abramson thanked her and replied with a grin, “I don’t know? You tell me.” The elevator was silent for the rest of the ride to the newsroom.

Situated just off the main newsroom, Abramson’s office offers a reprieve from the sleek contemporary look of the rest of the building. While space-age red plastic chairs and primary colors abound outside the glass walls of her office, Abramson has opted for a much more homey feel inside the private office she keeps in addition to her station in the heart of the newsroom. Her office desk is filled with knick-knacks, from a bobble head to a souvenir baseball and an homage to a great uncle in the form of a miniature concession stand. A single orchid plant sits on the round table along with a copy of the latest Newsweek and the upcoming Sunday Style Magazine.

With Abramson at the top of the masthead for just over 60 issues of the daily paper (not to mention the myriad other sections under The New York Times umbrella), as various news outlets deliver their respective profiles and insights on the lady of the Grey Lady, a theme has emerged—Abramson is smart, competent, and sometimes critical to the point of abrasiveness as executive editor. Sitting comfortably in one of the cushioned chairs in her office, sporting a small, slightly visible scratch on her nose from the latest play session with her dog Scout, Abramson finds the notion a bit curious.

“I haven’t ever described myself as tough,” Abramson says. Although she admits, “I’m aware that going back to when I was younger, and not in such a high position, that people could find me hard-charged.”

At times, Abramson can be hard to read. Her speech is slow and deliberate, elongating the final word of a phrase or sentence. Her responses, peppered with “you knows” as she chooses her next statement, can run the risk of sounding uninterested. But her excitement is apparent when she talks about the future of The New York Times, her love of writing on anything from her puppy to what is going on Pakistan, or even as she contemplates who does the best impersonation of her. Her favorite thing, she says, is “talking to journalists about what they are working on and what they are excited about. I schedule myself at least one hour every day of just walking the newsroom.”

Considering her current position, her reputation for natural (perhaps some might say aggressive) curiosity, and her oft-cited family worship of The New York Times as she grew up, it would seem that Abramson’s path towards a career in journalism would have been clear-cut. Abramson, however, explains that even during her freshman year at Harvard she didn’t exactly foresee becoming a journalist.

“I did a lot of extracurricular activities. I even took a tai chi class,” Abramson says. “I knew I loved to write and I wanted to give it a try. The idea of writing about the arts appealed to me.”

So Jill joined the ranks of The Harvard Independent, which she felt was more geared towards arts, culture, and weekend activities than The Harvard Crimson. She speaks fondly of her days at Harvard, from meeting her husband, Henry Little Griggs III ’76 (who, himself, wrote for The Crimson), to writing her history and literature thesis on British unemployment during the Great Depression.

“At Harvard, in a variety of courses, I learned how to be a much more perceptive reader and that has served me incredibly well in my professional life,” she says. “Critical, penetrating thinking about what you’re reading is the basic building block of what Harvard inculcates.”

It wasn’t until listening to the Watergate coverage during finals period her sophomore year that the journalism bug bit her.

“I was so aware of the impact of great investigative reporting by Bob U. Woodward and Carl Bernstein,” she says. “The idea that journalism could make such a difference in history was something that had my attention.”

Shortly thereafter Abramson was offered the opportunity to work as one of two Harvard campus stringers for Time Magazine.

Now, almost 40 years later, Abramson is arguably the most powerful woman in the journalistic world and has been introduced to a whole new level of scrutiny, whether concerning The New York Times’ coverage of Occupy Wall Street or her distinctive voice.

As the executive editor, Abramson’s day begins in true digital media fashion—with her iPad—catching up on the top stories and the news that developed overnight in preparation to head her newsroom. “You need only look at how the people around you are reading to know that the digital transition’s moving much more quickly in society broadly,” she says.

Just eight years ago, as the Chief of the Washington Bureau, Abramson could sometimes take her staff to the movies on Friday afternoons, before the days of online updates and weekend editions. Those days are long gone, especially at The New York Times, where online content is emphasized as emphatically as print.

Even the newsroom is strikingly quiet, a symbol of the changing times of reporting. The set of “All the President’s Men” this newsroom is not, as editors communicate almost exclusively via their computers rather than in a rowdy, smoke-filled room of tangled phone cords and frantic reporters trying to meet deadline.

While Abramson might head out of the office around 7:30 p.m. during the week, she views her activities outside the building as an extension of her duties as executive editor, whether it’s taking in the city’s vibrant theater scene, rooting for the Yankees, or keeping up on her fiction reading.

“I am a vacuum cleaner when it comes to culture,” Abramson says. “Being exposed to the most interesting parts of our culture is part of what will make me a good and broad editor.”

Abramson posits that it might be this curiosity and desire to get as much information as possible, whether on culture or the latest political news, which might be at the root of her “tough” rap.

“I think that I am full of curiosity, and I can press people hard to explain things to me,” Abramson says. “Sometimes I don’t mean asking questions as criticism but it can be heard as being too critical.”

“Is that always what is going to be said about a woman in power? I just don’t know,” she muses.

Abramson’s curiosity is certainly not one-sided, though, as she recently turned the tables and invited her staff to ask her questions in a “Grill Jill” session in the Times auditorium, a tradition she says will continue even as she settles into her position.

Unfortunately, women in power are no strangers to stereotypes about their leadership styles—University President Drew G. Faust even reached out over lunch and told Abramson she was always free for tea, advice, and sympathy if necessary, a gesture for which Abramson was extremely grateful.

Abramson, of course, is not a stranger to being a woman in a man’s world.

Abramson was a part of the first class at Harvard-Radcliffe that could choose to live in co-ed dorms. Upon opting to live in the yard in an all-female entryway of Grays, Abramson entered a sphere that was still very much dominated by male culture.

“I think some of us, and I, felt a little bit like we were pioneers,” she says. “At that point there was definitely an impression that women hadn’t lived there before; and some of the silly customs, like screaming out the window ‘Weld Sucks!’ in these big booming voices, those were male customs that carried over.”

Despite the changing times, Abramson says they were well received. “The men seemed to enjoy having us there,” she says. “I didn’t feel any hostility.”

While some journalists have been cautious to broach the subject of her sex, Abramson takes care to pay tribute to the women who surround her and came before her.

“I’ve been very conscious of the fact that I have this job and have benefited because of the women who came before me,” Abramson says. She cites her first female boss at Time Magazine, Sandra J. Burton,  and former New York Times reporter and Pulitzer Prize winner Nan C. Robinson, along with contemporaries such as Maureen B. Dowd and New York Times Company CEO Janet L. Robinson as those who have helped build the groundwork. After the suggestion is made that she occupies a role similar to these female predecessors, she seems surprised. “I feel if what you say is true, and I am a role model, that’s so flattering and it’s something to embrace and put energy into.”

Rather than dwell on her role in the journalistic world, Abramson turns the conversation towards a different form of mentorship within her family. “It’s not like I set out to be a role model, but I was co-leader of my daughter’s Girl Scout troop for some years, and at a point when she stopped going on the overnights I still went because I was the camping mom. I just always loved talking to the girls on those trips and learning from them.”

As the way in which news is consumed rapidly changes, due in large part to technology-hungry youth, Abramson, at 57, also acknowledges the power of the youth to help her with her job. Abramson has held a variety of teaching jobs as recently as last year, at Yale University.

“I learned more from my students, I feel, than they learned from me,” Abramson says. “I think a lot of what I learned about the changing landscape of how people get information and news came from talking to them and hearing them talk about what they read and how they read it.”

While Abramson has taken a break from teaching for the time being, she certainly has not forgotten about her Harvard roots, expressing a desire to return at some point, schedule providing. Indeed, she was on campus last year for a dinner during which she also spoke.

Curious about how she was percieved, she asked with a laugh, “Did they say I was abrasive?”