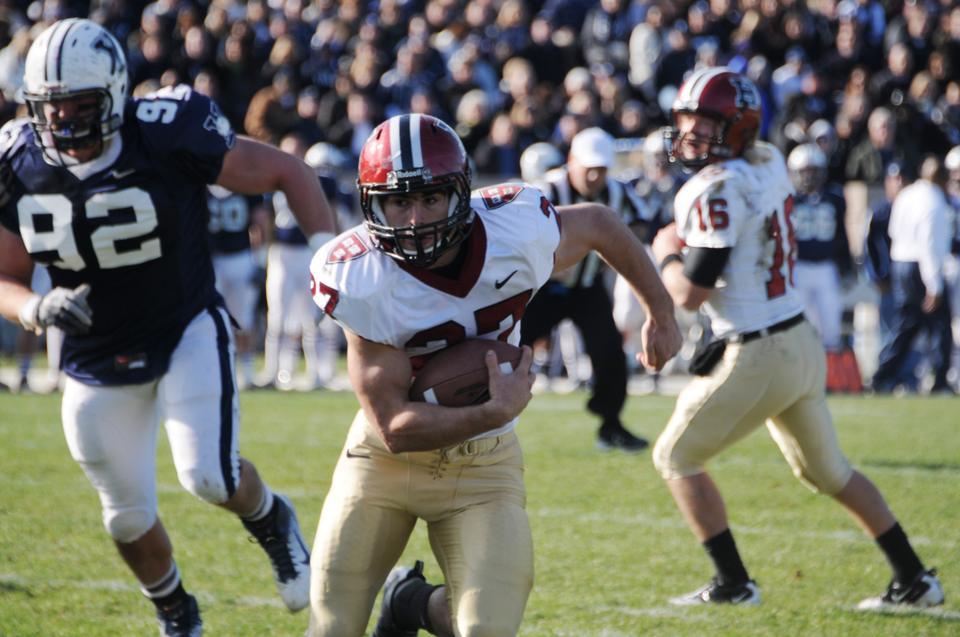 27' Zach Boden had 83 yards from scrimmage including a rushing touchdown as part of a balanced Harvard attack.
By Scott A. Sherman, Crimson Staff Writer

NEW HAVEN, Conn.—Maybe Patrick Witt should have gone to that Rhodes Scholarship interview after all.

The Bulldog quarterback—who last week received national media attention for his decision to play against Harvard today instead of attending the concurrent interview in Atlanta—was intercepted three times at the Yale Bowl by a swarming Harvard defense, which joined with Harvard’s highest-ever scoring offense to lead the Crimson to a 45-7 victory in the 128th rendition of The Game this afternoon.

With the win, No. 14 Harvard completed one of the most dominant seasons in its history, finishing 9-1 overall and 7-0 in the Ancient Eight.

"We got beat by a better football team today," Yale coach Tom Williams said. "That team is bigger, stronger, and faster. They've got good players at almost every position. ... They're the best team in our league, the best team we've played this year, and it showed."

After winning the Ivy title outright with a 37-20 win over Penn last weekend, the Crimson on paper had nothing to play for today. But the team nonetheless sent a talented senior class out with a resounding victory, a fitting epilogue to its a storybook season.

The win was the ninth straight for Harvard, which lost its opening game at Holy Cross but afterwards cruised through the Ancient Eight and two non-conference opponents during the rest of the year, never facing a major challenge on the road to its 14th Ivy League championship and first perfect Ivy season since 2007.

In his final collegiate game, quarterback Collier Winters went out with a bang, throwing for 355 yards and two touchdowns and rushing for one more. The senior also gained 62 yards on the ground and completed 27-of-42 passes on the afternoon, giving him a 68.6 percent completion percentage for the year that is the highest in Crimson history.

"It's been a long journey for me," Winters said. "This kind of season was something I'd always wanted to happen and I was hoping for. I'm thankful for my health in the last half the season, and the guys around me made things easy and made the season a lot of fun."

Things didn't start easily for the quarterback, who marched the Crimson down the field but fumbled at the Yale five yard line on the opening drive of the game. After the teams traded three-and-outs, Witt led the Bulldogs on a six-play drive that he finished off on 3rd-and-3 with a 24-yard touchdown strike over the middle to Jackson Liguori.

But from there, the Crimson would dominate the rest of the game, scoring 45 unanswered on its way to the win.

Winters responded to the early Bulldog lead by orchestrating an eight-play, 73-yard scoring drive that he capped with a four-yard run.

"It was annoying to cough up the ball after we got the momentum going and got things going on offense," Winters said. "But all year we were so confident in ourselves that no matter what adversity we had … we were going to be ready to keep pushing, and I think our confidence allowed us to move past it and get onto the next drive."

On the subsequent Yale possession, junior cornerback Brian Owusu stripped Liguori after a first-down reception, and sophomore Jaron Wilson recovered the fumble at the Crimson 43.

Winters then led Harvard down the field with ease once gain, throwing a 20-yard touchdown pass to senior wideout Alex Sarkisian three seconds into the second quarter to put the Crimson up, 14-7.

"There was a seam, and I just ran the route I was supposed to run," said Sarkisian, who finished with seven receptions for 97 yards. "Collier made a great play in the pocket and put the ball in the perfect place."

Special teams then began to play a major role in the game.

Witt brought the Bulldogs down to the Harvard 17, but after the drive stalled, sophomore cornerback Chris Splinter blocked a Yale 34-yard field goal try, and the Crimson took over at its own 28. On its ensuing drive, Harvard was stopped short of the end zone when sophomore tight end Cameron Brate dropped a third-down pass at the goal line, so Harvard lined up for a 22-yard field goal attempt.

But Harvard coach Tim Murphy called a fake that was executed perfectly, with junior QB Colton Chapple taking the snap and pitching back to kicker David Mothander, who sprinted along the left sideline and dove into the end zone.

"It's an easy call to make when you have confidence," Murphy said. "Our coaching staff and our players did a great job in gameplanning it and then obviously executing it."

The sophomore placekicker added a 21-yard field goal as time expired on the first half to send the Crimson into the break up 24-7.

The teams held each other scoreless in the third quarter, but late in the period, Wilson intercepted Witt on 4th-and-5 at the Harvard 30, putting a dagger into any hopes Yale had to get back in the game.

After the Wilson return, Harvard went 60 yards in six plays, with freshman Zach Boden darting untouched up the middle and into the endzone for an 11-yard score.

On the next Crimson possession, Winters hit junior tight end Kyle Juszczyk on a short pass, but Jusczcyk slipped a defender and ran 60 yards for another touchdown to put the Crimson up, 38-7. The reception gave Jusczcyk 107 yards on the afternoon and a team-high 37 catches on the season.

Witt was later intercepted for the third time by Crimson captain Alex Gedeon, who ran back the pass 32 yards to the house with 5:12 left in the game. For Gedeon, the touchdown put a crescendo on a senior season in which Murphy said the linebacker was arguably the best captain he has coached during his 18-year career at Harvard.

"That's perfection," Murphy said. "Alex Gedeon is a really special guy, as humble as they come, selfless, a great player. He is, in my humble opinion, the best linebacker in this league."

Witt was benched by Williams for the remainder of the contest, but by then, the Yale section of the 55,137-person crowd had greatly thinned out.

Harvard’s 45-point performance—its most points against the Elis since 1982—closed the book on the most productive offensive season in the program's 138-year history, giving the Crimson 374 points on the year to break the undefeated 2004 team’s record of 339.

"Today the kids rose to the occassion," Murphy said. "I think the assistant coaches did a great job in game-planning and preparation, and it all came together. It was our day."

After the contest, while surrounded by teammates and Harvard classmates who had stormed the field in celebration, senior Josue Ortiz proposed to girlfriend Kayci Baldwin '14 on national television.

"Since we kept winning, I was [planning] to do that if we won the Ivy League and beat Yale," said the defensive tackle, who also picked up his 10th sack of the year in the contest. "I got down on one knee, and she said yes."

Ortiz was one member of a senior class that completed its careers a perfect 4-0 against the Bulldogs and gave the Crimson its 10th win in its last 11 tries against Yale.

"They were just so coachable, so relentless, so resilient, so selfless, and eventually gave us such great chemistry," Murphy said. "We got on a roll and never got off it."

-Staff writer Scott A. Sherman can be reached at ssherman13@college.harvard.edu.