Professors weigh in on the movement's relevance and viability. 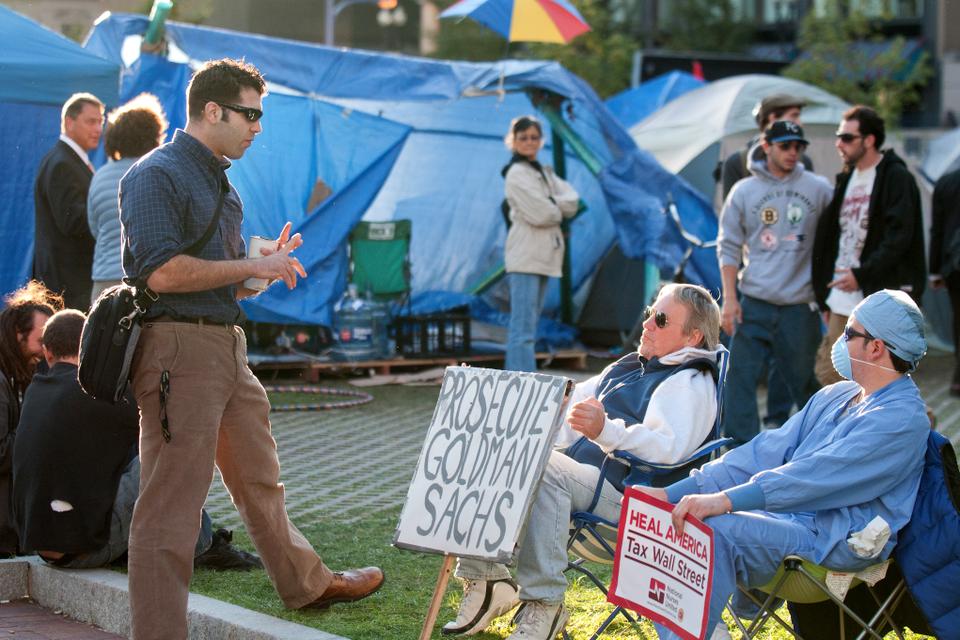 Michael, a retired teacher, and his son Justin, an unemployed surgical technician, discuss and debate the state of the economy and other topics with people at the Occupy Boston protest. By Jabulani R. Barber
By Jared T. Lucky, Contributing Writer

Three weeks ago Monday, Dan the Bagel Man was urging crowds of protesters to lock arms and resist an impending police raid on a small park across from Dewey Square.

Last Friday, Dan’s distinctive military-style cap, covered in anti-war protest buttons, was still easy to pick out in Occupy Boston’s Tent City. But as the protest approaches its second month, the Bagel Man spends more of his time handing out food and washing dishes.

Dan, whose nickname comes from his former job as a bagel vendor, is one of a few stalwart protesters that have stayed with Occupy Boston since the protest, inspired by demonstrations on Wall Street in New York City, began in Boston’s financial district. But as the protests continue and temperatures drop, many observers question where the Occupy movement is going.

“Is this a moment or a movement?” says Marshall L. Ganz, a senior lecturer in public policy at the Kennedy School of Government.

Ganz, who participated in a teach-in at Dewey Square, is one of many in the Harvard Community who have an interest in the protest—at least five Harvard students and alumni were arrested on Oct. 10, the night of the raid. And as the protest closes out its first month, many University professors are weighing in on the relevance and viability of Occupy Wall Street and its Boston counterpart.

Ganz knows a thing or two about protest movements. He organized for the Student Nonviolent Coordinating Committee in the 1960s, and later worked with Cesar Chavez and the United Farm Workers.

“It’s amazing that there hasn’t been more action,” Ganz says about the underlying reasons that prompted the Occupy protests. He says that he is surprised that the hardships caused by the economic crisis have not precipitated more turbulence.

But, according to Ganz, the current domestic unrest is a positive sign. “You have to polarize to mobilize,” he says, explaining his belief that civil unrest is an essential part of healthy democracy. “The way the public gets educated is through controversy,” says Ganz. “After all, democracy is a constructive form of contention.”

And the “occupiers” have seen plenty of contention. Although the Dewey Square encampment has been more tranquil than its New York City counterpart, Boston Police arrested more than 100 protesters on Oct. 10 after they expanded into a small park across the street. In other parts of the country as well, Occupy protests have come into increasing conflict with the authorities. Last Tuesday, California police broke up Occupy Oakland’s encampment with tear gas and riot gear, leaving one protester with a fractured skull.

In spite of the Occupy movement’s increasing presence in cities across the country, some say the movement lacks specific, attainable goals.

In Dewey Square, wide-ranging, even contradictory, viewpoints have been evident since the beginning. Protesters at the march on Oct. 10 tended to agree that wealth was unfairly distributed in the United States, but they offered a variety of specific grievances.

Ky Merrick, a sophomore at Lesley University who shared a tent with his girlfriend, said that he came to protest unreasonable tuition and student debt.

Matt Cloyd, a recent Dartmouth grad and member of Occupy Boston’s media team, said that he was more concerned with the undue influence of corporations on the electoral politics. Meanwhile, an older man distributed typed lists of grievances addressed to “the fat bastards on top.”

Harvard Business School Associate Professor Noel Maurer says the protesters must clarify their message to have a political impact.

Maurer, whose own brother defaulted on a mortgage after a substantial wage cut, says he thinks Occupy Wall Street should capitalize on economic frustrations to solidify its goals and make its message more accessible.

Suggesting that the movement adopt clear slogans like “Forgive the debt” and “Print more money,” Maurer says that the Occupy movement could do for the Democratic Party what the Tea Party protesters have done for the Republican Party. “It’s nice to have a popular movement to put these things on the table,” he says.

But Occupy Boston has no intention of embracing a comprehensive manifesto, according to media team volunteer David Lehnart. Lehnart says that determining specific goals would risk alienating certain groups in the movement. In fact, he says, the movement is even further away from narrowing down its goals than it was before the arrests of Oct. 10.

“We’ve only been around for [a few] weeks!” he says, expressing his frustration at media outlets that, in his opinion, are trying to project a political platform on Occupy Boston too early in its development. Lehnart says that Occupy Boston plans to stick around “indefinitely,” whether or not it adopts a specific political plan of action.

HKS Adjunct Lecturer Timothy P. McCarthy, who has made several visits to Occupy Boston and Occupy Wall Street, agrees. As a historian of American protest movements, McCarthy says that it is unrealistic to demand a “10 point plan” from the occupiers.

“Social movements are, by definition, oppositional,” he says. “You have to articulate what you’re against first.” According to McCarthy, the wide variety of messages on display at Occupy Boston “doesn’t suggest that the movement is incoherent” but rather that “our country is screwed up in many ways.”

Moreover, he says that Occupiers should be wary of attempts by the Democratic party to “co-opt” the movement for political purposes. “I want the President to come to Occupy and not the other way around,” he says.

DON’T TREAD ON ME

Many of the details visible around the camp reinforce claims that Occupy Boston plans to be a permanent protest unaffiliated with a political party. In the first week of demonstrations, protesters planted a resin, larger-than-life-sized statue of Mahatma Ghandi in the middle of Dewey Square.

All this is in keeping with American traditions of democracy, according to Harvard History Professor James Kloppenberg. While Kloppenberg says that “you can go back to the American Revolution” for examples of democratic protest, he sees particular parallels between the “amorphous” goals of the Occupy movement and the broad objectives of early 20th century Progressive reformers.

“There has been a tension throughout American history between direct democracy and representative democracy,” Kloppenberg says. “A healthy and productive tension.”

And yet, on most days, Dewey Square seems remarkably free of tension. Most of the chanting in Tent City now comes from Buddhists in the “Spiritual Space Tent,” not from protesters standing on the street. The same organizers that urged protesters to link arms against the police three weeks ago now hand out cough drops and Vitamin C, though they still cover their faces with bandannas.

Last Friday, one of the first days in October with a high below 50◦, comparatively few occupiers stirred from their tents. Dan the Bagel Man had to hunt for volunteers to carry water jugs, move furniture, and empty dishwater.

This trend concerns Ganz, the former affiliate of Cesar Chavez. While Ganz says he thinks Occupy Wall Street has already captured a powerful message with the slogan “We are the 99 percent,” he says that predicting the movement’s trajectory is like shooting “a moving target.”

“[The word] ‘Institutional’ is a contradiction in a social movement,” he says,

“There’s no stasis,” Ganz says. Quoting Bob Dylan, he advises that the activists keep up the pace. “If you’re not busy being born, you’re busy dying.”