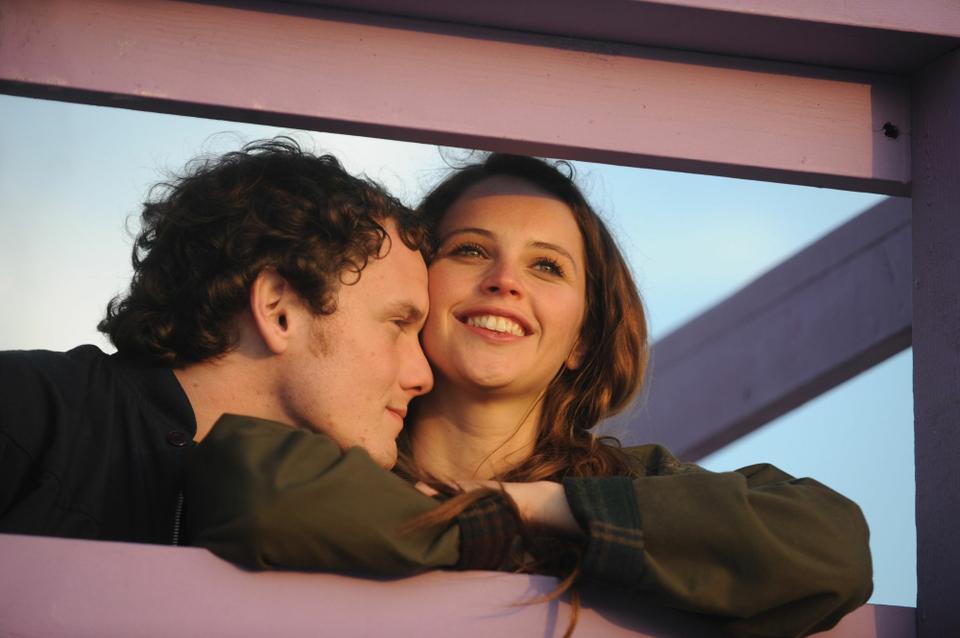 “Like Crazy” has all the features of a clichéd love story: two unrealistically attractive co-stars, a difficult situation that keeps them apart, and several slow soundtrack ballads throughout the ups and downs of their relationship to keep the tears flowing. It’s a modern take on the classic star-crossed lovers tale, but “Like Crazy” brings a bit more to the table than that. The content is more mature than that of most flicks in the genre, and its jump-cut filming captured with a still camera gives the movie a contemporary, avant-garde flair. As an emotional drama with believable actors and enough style to set it apart, “Like Crazy” successfully breaks the mold of sappy romance movies while still necessitating a box of tissues.

The film begins by introducing Anna (Felicity Jones) and Jacob (Anton Yelchin), two college students in Los Angeles who quickly become smitten with each other. As a citizen of the United Kingdom, Anna finds herself unable to leave Jacob when her term abroad ends, and chooses to overstay her visa instead. She eventually returns to the UK but then is denied reentry to the United States due to the violation. Meanwhile, Jacob’s thriving furniture business in the States prevents him from packing up and moving to England. The rest of the film follows Anna and Jacob’s romance—and sometimes lack thereof—as they attempt to maintain an overseas relationship.

The plot moves quickly because it encompasses eight years of the characters’ lives, from age 19 to 27. This allows the film to include more mature relationship issues than those commonly portrayed in love stories made for the same demographic. Thus, rather than butting heads over prom, Jacob and Anna find themselves dealing with questions of marriage and career paths. At the same time, “Like Crazy” doesn’t feel rushed. Rather, the film slows down at just the right moments in order to emphasize aspects of Anna’s and Jacob’s relationship seldom seen in mainstream love flicks. It’s a movie low on heady emotional thrills and heavier on the characters’ pain and uncertainty—a film that actually entertains the possibility that circumstances beyond anyone’s control may actually succeed in keeping its protagonists apart.

Director Drake Doremus chose to use an unorthodox scripting method for “Like Crazy.” Though he and co-writer Ben York Jones crafted a very specific 50-page outline full of content and basic stage direction, all of the movie’s dialogue was improvised by the actors. Such unusual quirks made it quite difficult to get funding for the film; it was ultimately made for a mere $250,000, pocket change in the movie world.

“Like Crazy” was then filmed in 22 days with a still camera, and the simplicity of this filming style gives the movie a sense of modern aesthetic that also reflects its day-to-day tone. This almost monotonous method seems fitting because the film’s protagonists are constantly kept apart by inexorable everyday factors. Unlike most modern romances, “Like Crazy” recognizes the role of the mundane in real-world relationships.

Part of the undeniable charm of the film can be attributed to its up-and-coming actors. Jones is not a household name yet, but her poignant performance in “Like Crazy” may help to change that. The British actress didn’t even meet Doremus and co-star Yelchin until the first day of rehearsal, but one would never know it. The actress’s eyes convey more emotion in each scene than even her improvised dialogue, and the chemistry that exists between her and Yelchin is the sort rarely seen on screen.

Yelchin’s previous roles have had a sort of boy-next-door innocence, but his character in “Like Crazy” exudes a more composed maturity that perfectly exemplifies the tone of the film. Both actors’ performances really make you feel like you’re watching intimate snippets of a relationship accidentally filmed and put on screen, free of the bells and whistles that too often accompany similar movies.

“Like Crazy” is not your typical, mushy love movie. It never promises a happy ending, but rather takes a more realistic approach to a situation that countless individuals find themselves in every day. Though sniffles will admittedly be heard throughout the theater, “Like Crazy” manages to present the tropes of a classic love story in a way that doesn’t feel cheesy or forced. For that, it is a welcome exception in the world of romantic dramas.