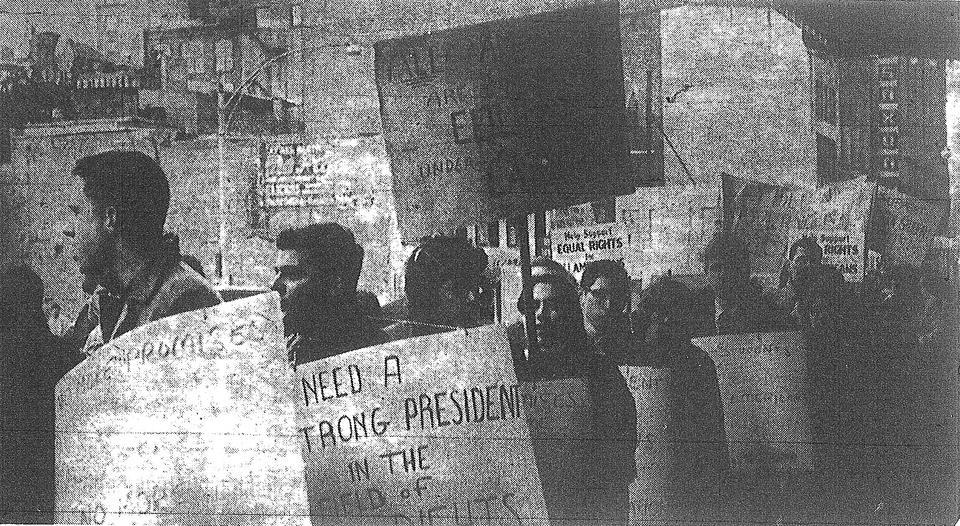 When Hobart G. Armstrong Jr. ’63 donned his helmet and his #40 Crimson jersey to step onto Soldiers Field in 1961, he was the only black man on the football team. When Spencer C.D. Jourdain ’61 sang in harmony with his fellow Harvard Glee Club members, what made him stand out amongst his peers wasn’t the color of his crimson suit jacket, but the color of his skin.

Although there were roughly six black undergraduates in the Class of 1961, black students didn’t always experience the discrimination that some might expect would accompany their minority status.

With lingering ’50s-era McCarthyism and Cold War fears continuing to suppress outspoken activism, the year 1961 signaled a relative lull in civil rights protest at Harvard, as black students became involved in extracurricular activities and felt integrated in the broader college community. Although many say they did not experience significant discrimination at Harvard, growing racial tension off-campus would slowly raise awareness of racial issues among students, eventually igniting vibrant student activism in the late ’60s.

On Harvard’s campus, the ’50s and early ’60s served as a period of relative silence on civil rights before activism boomed in the later ’60s.

“Civil rights was just a topic among topics,” Jourdain says. “It certainly wasn’t the dominant issue at the time.”

But just a few decades earlier, Jourdain’s father Edwin Bush Jourdain, Jr. ’21 had spearheaded the movement to desegregate the dorms during his own time at Harvard.

Wandering the aisles of the activities fair during his freshman year in 1959, John N. Woodford ’63 was warned by his friends to think carefully about the student groups that he signed up for.

Rather than being concerned about him over-committing himself while adjusting to his new life at Harvard, Woodford says that his friends still held lingering concerns about the era of McCarthyism in which people who engaged in activism and anti-government activity were seen as suspect.

Some people still believed that associations with socialism or communism, even if only in the form of signing up for a student activist group’s list, could ruin their reputation and even their careers later on in life, Woodford says.

But the early ’60s marked a transition period between that fear of action—instilled in the American population by organizations such as the House Un-American Activities Committee—and the later activist generations that would risk both their position at the University and their lives in the fight for racial equality.

The mixture of these two mentalities meant that a slow but constant evolution into a new era marked the period.

“It was a mix of the dying ’50s and the emerging ’60s, so there were a lot of different currents at the time,” Harvard Kennedy School Lecturer Marshall L. Ganz ’64-’92 says.

But a hesitance to engage in activism did not translate into discrimination on campus.

Scanning the Freshman Union, one could easily spot the crew team and the football players, but the table that stood out the most to many was that filled with black students, Woodford says. But he adds that this group would also welcome other students and did not feel they were unwelcome elsewhere.

Most black students spent a significant amount of time with other black students, but they maintained close relationships with students of other races without concerns about racial differences.

Harvey Pressman, a white graduate student who graduated in 1964, says that race was on the backburner when he became close friends with an African-American student in his class.

“We thought of him more as a lousy second baseman than an African American,” Pressman says.

But the weekends led to more distinct racial separations as students spent time outside of the classroom.

“The only place that I was ever aware of difference—although it didn’t really affect me—but black students were not invited to the clubs, or at least barely any were,” Jourdain says.

His freshman year, Armstrong lived in Pennypacker 48, along with another black student Lowell S. Davidson ’63 and white students Philip A. Cromer ’63 and Franklin J. Bardacke ’63.

“It was an uptight place,” Bardacke says, referring to Harvard. “People weren’t really looking for change because they weren’t that unhappy with what it was.”

For Jourdain and Armstrong, their involvement in student groups gave them a strong sense of belonging, despite being in the extreme minority.

“Football was a team effort,” Armstrong says. “There was no discrimination that I could perceive.”

Similarly, Jourdain described his time on the Glee Club as the highlight of his Harvard experience.

“It connected me to the richest traditions and history of Harvard,” Jourdain says. “It was a deep and profound experience.”

Even without discriminatory practices or racial antagonism, events that seemed small to other students sometimes stood out in the minds of black students as they reinforced the continued existence of racial differences.

“One of our classmates was doing a paper on [African Americans],” Woodford says. “So if we didn’t think of ourselves as some kind of group or entity, it was kind of forced upon us once we saw that they were studying us.”

But rather than being irritated or insulted by this assignment, Woodford says that he and most of his black friends saw it as absurd and entered interviews with the writer with an attitude that made light of the project.

Woodford had grown up in Benton Harbor, Mich., an “apple pie, Chevrolet, all-American town” where he attended an integrated school and had not experienced significant first-hand discrimination despite his African-American heritage.

However, when he traveled to Washington, D.C. with high school friends to attend an amusement park after his senior year in high school, he found that he was denied entry to the park because of his race.

After this, Woodford found that he had a personal connection to the movement for racial equality, which drove him to get involved with the cause.

“Since I had been barred from that amusement park, I kind of felt immediately that I had been involved with [the civil rights movement] and maybe if I hadn’t, then it might have felt unnatural or like someone else’s problem,” Woodford says.

It was these first-person encounters with systematized racism that drove Woodford to take up the cause of racial equality. As an undergraduate, he and a fellow student picketed locations of Woolworth’s, a national department store chain with segregated locations in the South.

But not all students on campus carried the same passion for civil rights activism, leading Pressman to describe the atmosphere as a “hotbed of rest.”

For Jourdain, attending Harvard was less of a social statement than an opportunity.

“That was the mindset of our class,” Jourdain says. “We were there to get an education and then to go out and be successful people in our chosen fields, not start a cohesive social movement.”

While growing unrest in the South slowly brought news of boycotts and eventually the Freedom Rides in 1961, Harvard students often were not entirely aware of what was going on 1,000 miles to the south. Ganz says that not all Harvard students were aware of the extent of segregation in the South and the problems it created.

“When you come from very privileged backgrounds you don’t see the world that way and you have to be confronted with it,” Ganz says. “Retrospectively, we kind of look back at that era and say it looks obvious that racial segregation should end, but it wasn’t obvious to most people at all, even in a place like Harvard.”

For Ganz, it was not a specific incident that convinced him he could no longer stand on the sidelines. Inspired by people his own age leading the movement in the South, Ganz left Harvard to head to the South himself and campaign for civil rights.

Ganz says that many of his peers would publicly assert their belief in racial justice, but only a few were “really putting their lives on the line to change things. It forced you to examine yourself and say, ‘Are these values real to me and are they enough to make me act?’”

As civil rights began to inspire activism throughout the nation, the climate on campus slowly began to evolve.

“Was it a huge conflagration? Well, no. But the flames were sure flickering,” Ganz says.