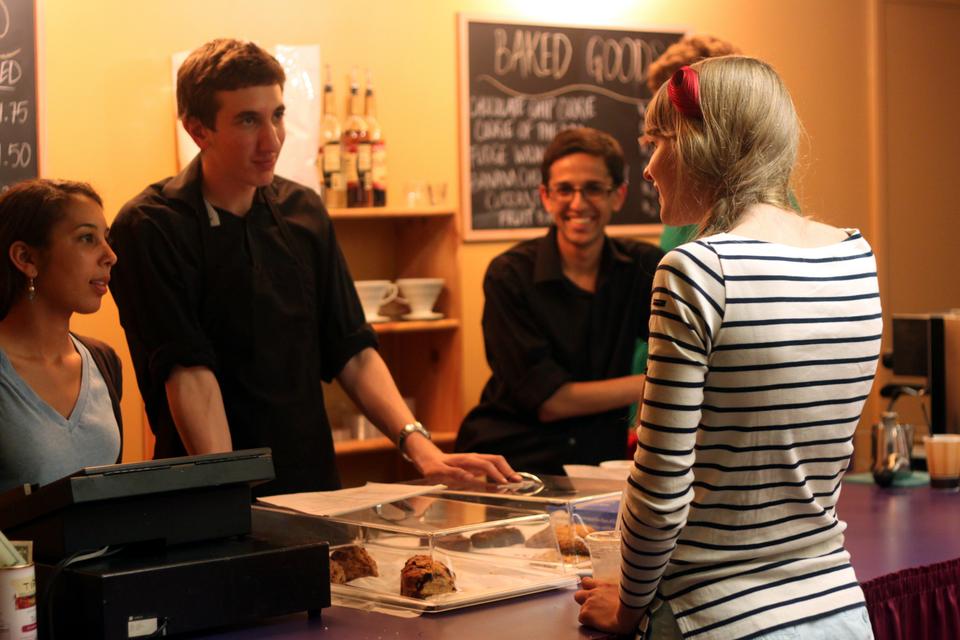 Anna C. Mapes '13 orders a drink from Jesse J. Kaplan '13, Laura S. Hinton '13, and Chandan G. Lodha '13 at Tuesday night's opening of Cabot Café. The café will be holding its spring preview in the basement of Cabot house through the remainder of reading period, and it will reopen in the fall.
By Justin C. Worland, Crimson Staff Writer

Cabot Cafe kicked off its four day preview period with a crowd and a series of live performances Tuesday night in what Cabot residents formerly called “the Television Room,” a room in the basement of Cabot House. The Cafe will formally open in the fall.

Cafe organizers and opening night attendees hailed the Cafe as an improvement to student life in the Quad.

“I think it’s really great. We’re making use of space in the Quad,” said Talia M. Fox ’13, who attended the Cafe’s opening night. “It brings attention to how great this place is.”

Annie M. Baldwin ’13 said that while Pforzheimer House has a grill that is open late at night, the coffee and pastry offerings at Cabot Cafe are markedly different. The Cafe gives the Quad a taste of the cafes and coffee shops located near the River Houses, she said.

“We don’t have that many perks in the Quad. It’s nice to have our own little hangout space,” Melanie A. Fontes ’13 said while studying at one of the Cafe’s tables. “I want it to end up like the cafe on ‘Friends.’ I think that’s where it’s headed.”

The Cafe, which has been in the works since last fall, is the result of months of effort by Cabot residents Laura S. Hinton ’13, Jesse J. Kaplan ’13, Chandan G. Lodha ’13, and Crimson photo editor Daniel M. Lynch ’13.

Lodha said that Kaplan and Lynch were the first to get the concept moving.

The group dealt with everything from purchasing the furniture to dealing with Harvard University Hospitality and Dining Services to selecting coffee and pastry vendors.

Ultimately, the group chose Petsi Pies for the pastries and Dunkin Donuts and Barismo for the coffee.

The Cafe was funded by the student organizers along with contributions from Cabot House Masters Rakesh and Stephanie R. Khurana.

The student funding of the project makes it a unique food outlet for students on campus, Lodha said. He said that any profits that the Cafe makes will go to the project’s organizers.

While the hours for the fall are yet to be decided, Kaplan said it will definitely stay open at night.

He said that they would respond to student demand when deciding whether to open it for additional hours.

The Cafe is located in what was formerly the Cabot TCR, which included a television and casual social space.Kaplan said that prior to being used for television viewing, the room had been used as a convenience store.

During its four day preview period, the Cafe will be open from 8 p.m. through midnight until this Friday.