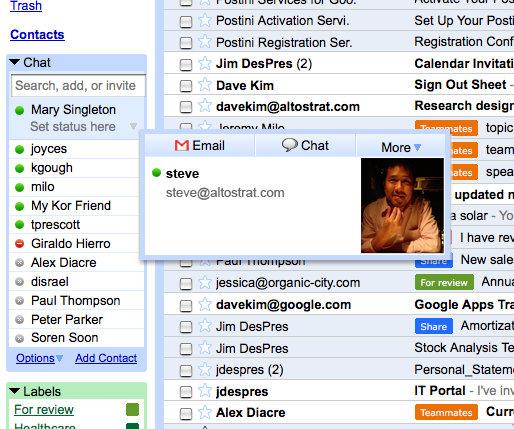 Gmail, whose interface can be seen above, will serve as the email provider for most College students' accounts starting in the middle of August.
By Gautam S. Kumar and Zoe A. Y. Weinberg, Crimson Staff Writers

Updated July 20, 1:00 a.m. | Gmail will serve as the email interface for most Harvard undergraduate accounts by the middle of next month, replacing the webmail client currently designated for those addresses but used by a fraction of those students.

Students with email addresses that end in “college.harvard.edu” will see the interface switch to Gmail on August 15, the College said on Tuesday. The switch comes following feedback from students asking for changes to the email system, Dean of the College Evelynn M. Hammonds said in a statement announcing the switch.

Many members of the Class of 2012 still use the “fas.harvard.edu” email address.

Gmail has assumed the role of the primary email client on campus. Currently, more than four out of five Harvard students use Gmail, Hammonds said.

Even in its earliest months, Gmail attracted a sizable portion of the student body. In 2004 when the service debuted and was invitation-only, an undergraduate told The Crimson, “If anyone doesn’t already have Gmail, they don’t deserve to have it ever.”

Since then, its popularity at the College has soared. In 2007, 38 percent of undergraduates said Gmail was their preferred email provider. By 2008, the percentage had risen to 58.

Harvard Law School uses Mail2World to manage its email services. When it selected its email provider, Google could not meet its requirements for user functionality and administration, according to Pratike Patel, director of enterprise services at the Law School.

Patel said that the Law School will examine feedback the College receives related to Gmail over the next few years.

The College’s announcement comes on the heels of Harvard’s overhaul of its IT services. In June, the University announced the creation of Harvard University Information Technology, which centralized FAS IT and Central Administration IT with the goal of streamlining processes.

“The @college email was clearly identified by students as a pain point, and our goal was to address it quickly and efficiently,” wrote Anne H. Margulies, chief information officer and the lead administrator involved in the IT overhaul, in a statement.

“We’re getting this done incredibly fast—in just four months—and this would not have even been possible without the HUIT transition which allowed us to join our technical staff and form the team needed to get this done," she said.

According to Margulies, a number of other technology-related changes will be announced in the coming weeks. And Harvard’s iSites are already running 50 percent faster, she reports.