Experts Urge Caution as Hurricane Irene Moves Up the Coast

Despite storm's downgrade, high winds and heavy rains will sweep through Cambridge 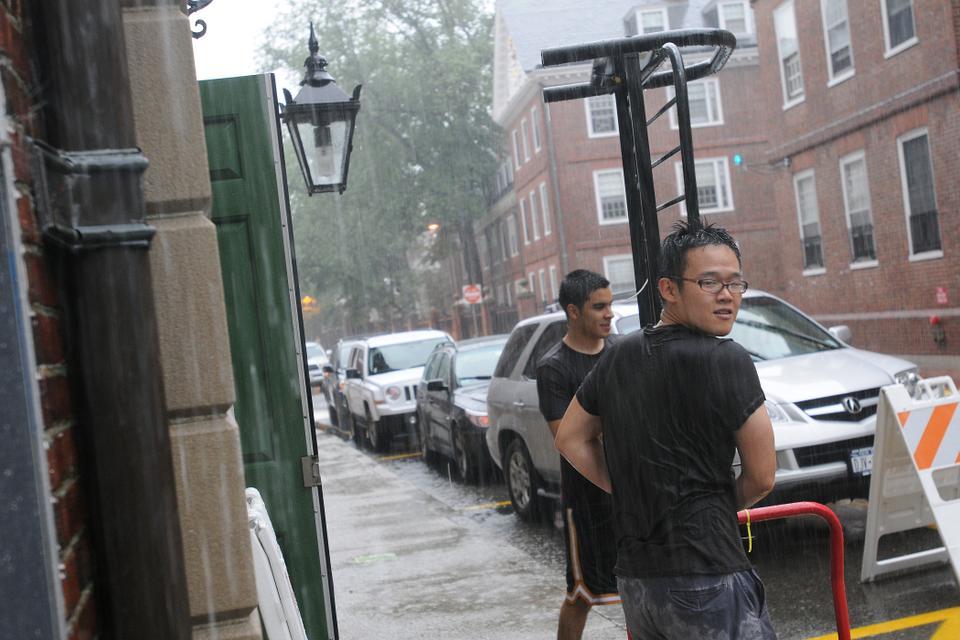 Students move a futon frame out of storage in Leverett House. The rain preceding Hurricane Irene started early in the afternoon on Saturday.
By Julie M. Zauzmer, Crimson Staff Writer

The hurricane has been downgraded over the past two days from a Category 3 to a Category 1 storm, but high winds and unusual amounts of rain could still have destructive effects.

Kim Buttrick, a meteorologist at the National Weather Service office in Taunton, Mass., said that Cambridge would feel the first rains Saturday afternoon while the eye of the storm passed over North Carolina.

“The northern fringes of the rain bands are already moving over southern New England,” Buttrick said. “It’s huge. It’s wider than the state of Pennsylvania. In terms of width, it’s like two Pennsylvanias side by side, so almost six to eight hundred miles wide.”

Irene is expected to move up the Atlantic Coast overnight, making landfall again on Sunday morning in Long Island. After that, Buttrick said, the storm looks likely to cross the Long Island Sound and touch down near Hartford, Connecticut on its way towards Massachusetts. At that point, Buttrick said, Irene will be a “weakening Category 1 hurricane.”

By the time the center of the storm reaches the Cambridge area on Sunday, Buttrick said, it will probably be sufficiently weak to no longer be called a hurricane.

Buttrick predicted one to three total inches of rainfall for Cambridge—not enough to cause the Charles River to flood, she said, but sufficient to overwhelm poor drainage systems in some urban areas.

Wind could also cause damage, she said, with sustained blasts of 25 to 40 miles per hour lasting throughout the day Sunday and occasional gusts as powerful as 60 miles per hour.

The city of Cambridge will open two shelters at 8 p.m. Saturday, though Cambridge Police Department spokesperson Daniel M. Riviello said that evacuations are unlikely. Harvard officials have announced that the University has its own plan for facilities, food, supplies, and transportation in the event of an emergency.

Riviello said that the city has established an emergency operations center at Cambridge Police Department headquarters—a room equipped with internet, radio, and telephone access as well as backup generators.

The control room will be staffed by officials of numerous city agencies as well as representatives from city institutions, including Harvard, so that all parties can make decisions together about emergency responses even if communication shutdowns occur.

Harvard students were allowed to move into their rooms two days early in order to travel to campus before the storm clogged roads and closed airports. But many were unable to change their travel plans on short notice and now fear they will not be able to get to Harvard before classes begin on Wednesday.

Outdoor events scheduled for Sunday have been canceled.

The city of Cambridge had made plans during the summer to launch next week a new emergency alert system called Code Red, which broadcasts severe weather alerts via phone calls, text messages, and emails, Riviello said. Because of the storm, the police department introduced the new system early, making automated phone calls yesterday to 30,000 landline phone numbers which were listed in telephone directories. Police now encourage residents to register their own cell phone numbers and email addresses so that they can receive more alerts.

“We really wanted to roll it out for Irene because we know people are anxious,” Riviello said. “We’re not used to getting hurricanes here.”

Hurricanes hit New England only once every ten years, according to Buttrick. The last one that directly hit the region, she said, was the Category 1 storm Bob in 1991. No major hurricane—meaning Category 3 or higher—has hit since the “two sisters,” Carol and Edna, in 1954.

Tags
Harvard in the CityUniversityHurricane Irene