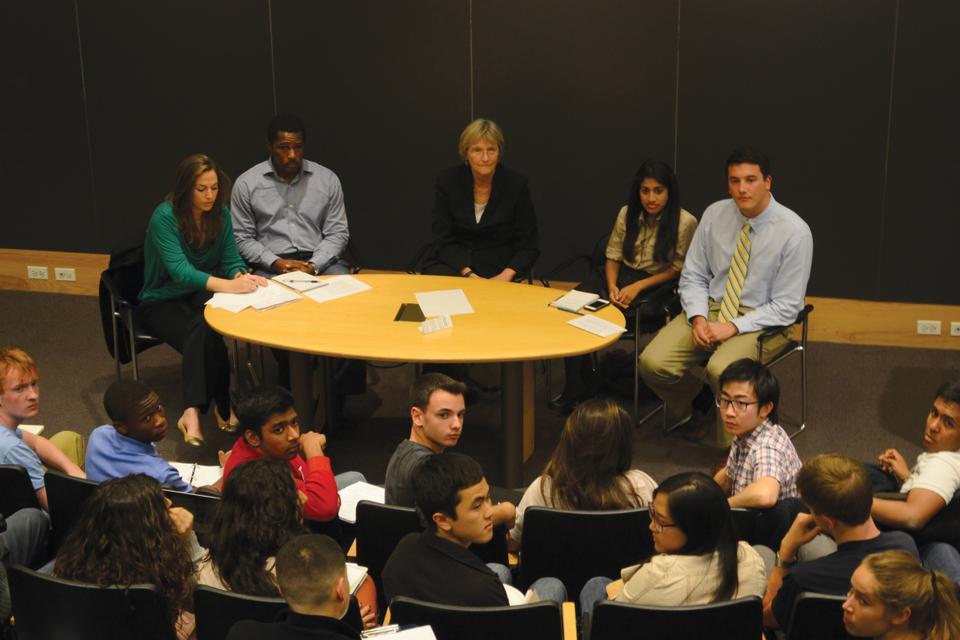 President Drew Faust answers questions at the Undergraduate Council and Harvard Graduate Council General Meeting. Her presence at the open forum was driven by a motivation to increase contact and dialogue with students.
By Quinn D. Hatoff and Hana N. Rouse, Crimson Staff Writers

Harvard’s investment strategy is aimed at providing funds for the University’s teaching and research initiatives, rather than promoting a particular social cause through investing, University President Drew G. Faust tried to impress upon students during an open forum hosted by the Undergraduate Council and Harvard Graduate Council Monday evening.

“Its primary purpose and its fundamental commitment is to generating the revenue from the endowment that enables us to do everything that we do,” Faust said of the Harvard Management Company, which oversees the University’s investments. “That is its sustaining goal and it devotes itself to that, not to using the investments to advance particular agendas of one sort or another.”

Faust addressed the University’s investment strategies in response to question about whether she thought Harvard should be more transparent regarding the way it manages its endowment.

Faust compared investments to a chess game, where success is dependent upon not revealing strategy.

“Transparency and investment success are not correlated,” Faust said.

Over the past year, students at Harvard have called for Harvard to consider socially responsible investment, which encourages the incorporation of environmental, social, and governance concerns into evaluations of potential investments.

Samuel F. Wohns ’14, who asked Faust why Harvard has policies in place prohibiting investment in tobacco but not in other areas like child labor, said he was not satisfied with Faust’s response, and believes the University should be transparent about its investments.

“The idea that transparency in investment processes is negatively correlated with profit is unfounded and untrue,” said Wohns, who also noted that many organizations choose to follow the United Nations’ Principles for Responsible Investment to guide their own investing.

Wohns, who is a Crimson magazine editor, is one of the founders of Responsible Investment at Harvard, a group that advocates for SRI and transparency.

Faust said that HMC looks for investments that it believes will be sustainable over the long term, which necessarily includes evaluating factors such as labor policy.

She added that “only in the most extreme of circumstances” has Harvard decided to divest for ethical reasons.

HMC currently does not invest in certain industries, including cigarette companies and the businesses that provide packaging and filters for tobacco products. Harvard has also promised to steer clear of PetroChina since HMC decided to divest in 2005 because of the company’s connections to the Sudanese government.

In addition to investment strategy, Faust addressed other student concerns including library reorganization, compensation for Harvard employees, and the concept of “One University.”

The UC solicited questions for the event using a Google Doc that was sent over House lists in the days preceding the event.

As a follow up to Monday’s forum, the UC will host a panel on College governance with Dean of the College Evelynn M. Hammonds next week.