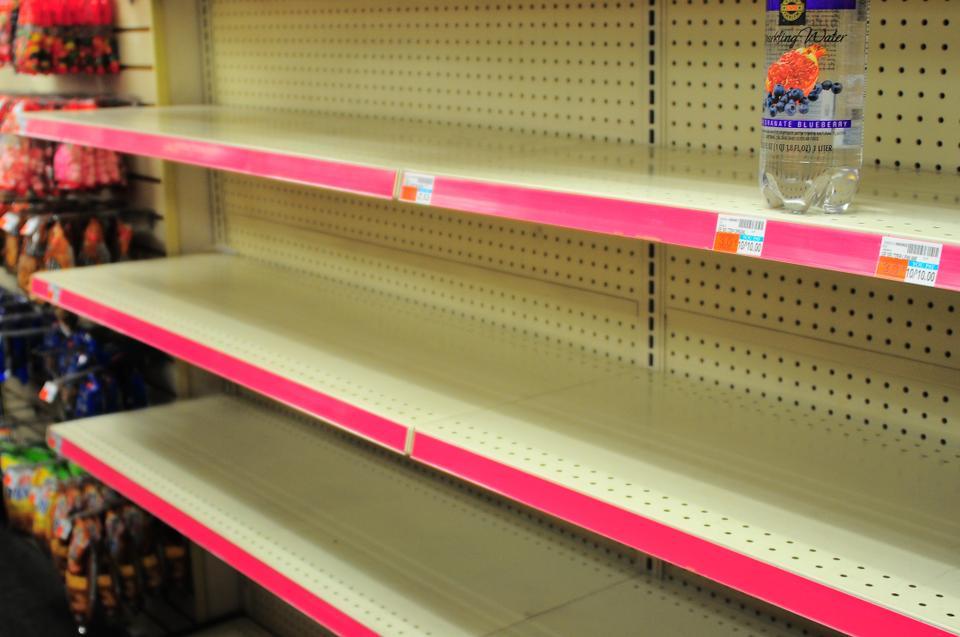 The shelves of CVS were emptied of water and non-perishables Sunday night as students and area residents prepared for the arrival of Hurricane Sandy, which led to the cancellation of Monday classes.
By Jared T. Lucky, Crimson Staff Writer

As Hurricane Sandy barrels toward Cambridge, Harvard University plans to cancel classes for the first time in 34 years. In an email to the College, Dean Evelynn M. Hammonds wrote that the Faculty of Arts and Sciences has canceled all Monday classes because of the hurricane, but dining halls will remain open. Restrictions that ordinarily bar upperclassmen from eating in Annenberg and non-residents from eating in Adams and Quincy Houses will be lifted for the day, the email said, allowing all students to eat in the most convenient dining halls.

An earlier post on the University website announced that Harvard had suspended “all but core operations” for Monday, meaning that non-essential employees would not be expected to come to work.Massachusetts Governor Deval L. Patrick ’78 urged colleges and universities to cancel classes in a Sunday afternoon press conference, after declaring a State of Emergency for the Commonwealth.

In the past, Harvard has been notoriously reluctant to cancel classes because of bad weather—in 1977, former Dean of Students Archie C. Epps III quipped that “Harvard University will close only for an act of God, such as the end of the world.” The last weather-related closure was caused by the historic blizzard of 1978. Before that, the University had not closed since a catastrophic 1938 hurricane.

When asked if Hurricane Sandy constituted such an “act of God,” University spokesperson Kevin Galvin responded in an emailed statement that Harvard decided to close “out of concern for the hazard presented by the approach of Hurricane Sandy and in accordance with the Governor’s guidance.”

The National Weather Service issued a high wind warning for Cambridge on Sunday, citing the possibility of sustained winds of 35 to 45 miles per hour and gusts of up to 75 miles per hour.

The peak of the storm, according to Bill Simpson, a meteorologist from the National Weather Service, will likely reach the Boston area Monday morning. Simpson said that although the center of the hurricane will be primarily over New Jersey, widespread power outages in the Boston area are likely.

After the announcement, Harvard students stocking up on emergency supplies cleaned out shelves in the CVS on Mass. Ave. Dozens waited in line to purchase water bottles, doughnuts, potato chips, and gallons of tea—anything that could possibly come in handy if Sandy were to trap undergraduates in their dorms.

“I don’t really want to leave my room tomorrow,” said Keziah A. Imbeah ’16, who carried a basket full of cookies and bottled water as she searched a barren shelf for soup. “It’s something you might see on the news,” she said of the chaotic scene in the convenience store.

In light of the hurricane, the admissions office granted prospective students an extension on the deadline for early action applications. The announcement, posted on the admissions website, stated that the off

ice will accept any late applications with a note of explanation.

—Christine Y. Cahill contributed to the reporting of this story.