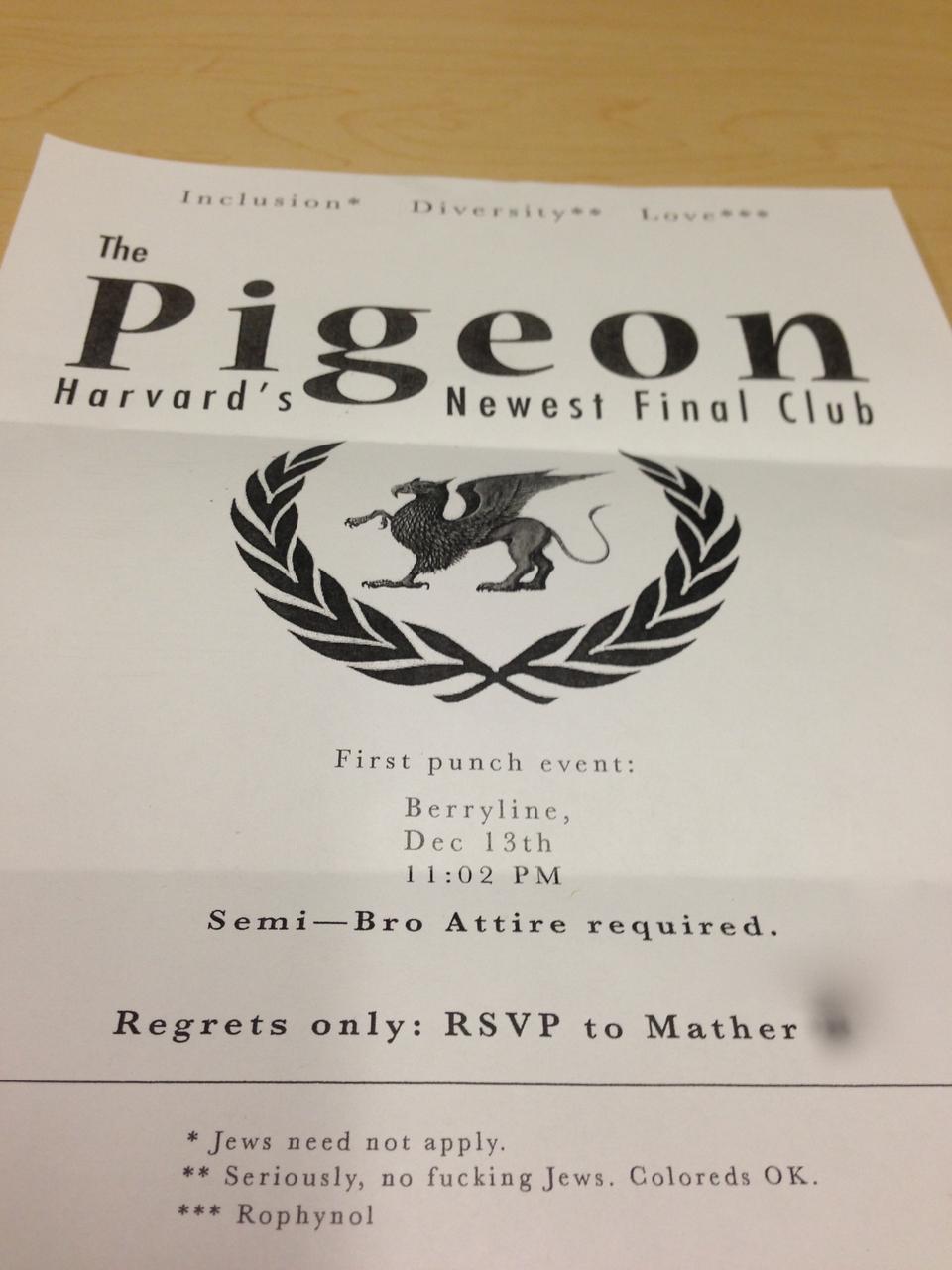 The enclosed flyer, bearing a crest of a griffin encircled by a laurel wreath, invited recipients to the first introductory punch event of the purported social club “The Pigeon.”

The invitation listed three virtues, each with asterisked notes. The first principle, “Inclusion,” came with the footnote, “Jews need not apply.” The second, “Diversity,” was followed by the words, “Seriously, no fucking Jews. Coloreds OK.” And the third, “Love,” directed readers to the term “Rophynol”—a misspelled rendering of rohypnol, the date rape drug better known as roofies.

The flyer also instructed aspiring members to wear “Semi-Bro Attire” to the punch event, to be held at frozen yogurt shop Berryline at 11:02 p.m.—two minutes after closing time—on Dec. 13, or to send their regrets to a room in Mather House.

One student who lives in the five-person suite that includes the room specified in the flyer said that she and her suitemates were not involved in creating or distributing the invitations. The Matherite, who was granted anonymity by The Crimson because she said she did not want to be associated with language that she finds offensive, added that she and her suitemates have no knowledge of who was behind the flyers.

Also in the wee hours of Friday morning, two Northeastern University students vandalized a menorah on Northeastern’s campus. They were later identified in a surveillance video and will face disciplinary action at Northeastern. No evidence has been reported to suggest a link between the two incidents.

The mock invitations distributed at Harvard drew a swift response from College administrators, who summoned at least one student organization leader on Friday as they began investigating the incident.

Owen T. L. Bates ’13, president of the Harvard Lampoon, adamantly said his organization had “nothing to do with” the flyers, which he said were “basely crass” in a tone inconsistent with the Lampoon’s style of “pretentiously crass” humor. Still, he said he received an email and a phone call from the Office of Student Life on Friday morning asking him to meet with Interim Associate Dean of Student Life David R. Friedrich. When they met midday on Friday, Bates said, Friedrich indicated that the conversation was prompted in part by speculation in the comments section of an earlier version of this article that the Lampoon, a semi-secret Sorrento Square social organization that used to occasionally publish a so-called humor magazine, may have been responsible for the incident.

Though many Harvard community members guessed that the flyers were an attempt at satire of the exclusive all-male final clubs, they roundly condemned the inflammatory references in the invitations.

Dean of the College Evelynn M. Hammonds wrote in an emailed statement on Friday that the flyers were “deeply disturbing” to her and others in the Harvard community.

“As Dean of the College, and as an educator, I find these flyers offensive. They are not a reflection of the values of our community,” Hammonds wrote. “Even if intended as satirical in nature, they are hurtful and offensive to many students, faculty and staff, and do not demonstrate the level of thoughtfulness and respect we expect at Harvard when engaging difficult issues within our community.”

Christopher H. Cleveland ’14, president of the Harvard Black Men’s Forum, wrote in an email that he thought the invitations, regardless of their intent, had gone too far.

“As students of a university with a very peculiar history concerning ethnic and racial relations, we should be working together to build up each other,” Cleveland wrote. The first final club to admit a black member was the Spee, in 1965; the Porcellian had no black members until 1983.

“Publications that alienate specific ethnic and racial groups are not aligned with that goal,” Cleveland added.

The invitations are not the first of their kind. In 2010, a group of undergraduates distributed flyers under doors, in the tradition common to real final clubs, encouraging students to refrain from joining the clubs or attending their parties. Organizers claimed that Harvard’s eight male and five female final clubs, which are not recognized by the University, promote an exclusive and dangerous social environment. And in a similar campaign in 2011, organizers slipped letters under the doors of sophomore men asking them not to participate in punch in part due to the “unequal access to social space” enjoyed by the male clubs over the female ones.

— Julia K. Dean and Gina K. Hackett contributed to the reporting of this story.