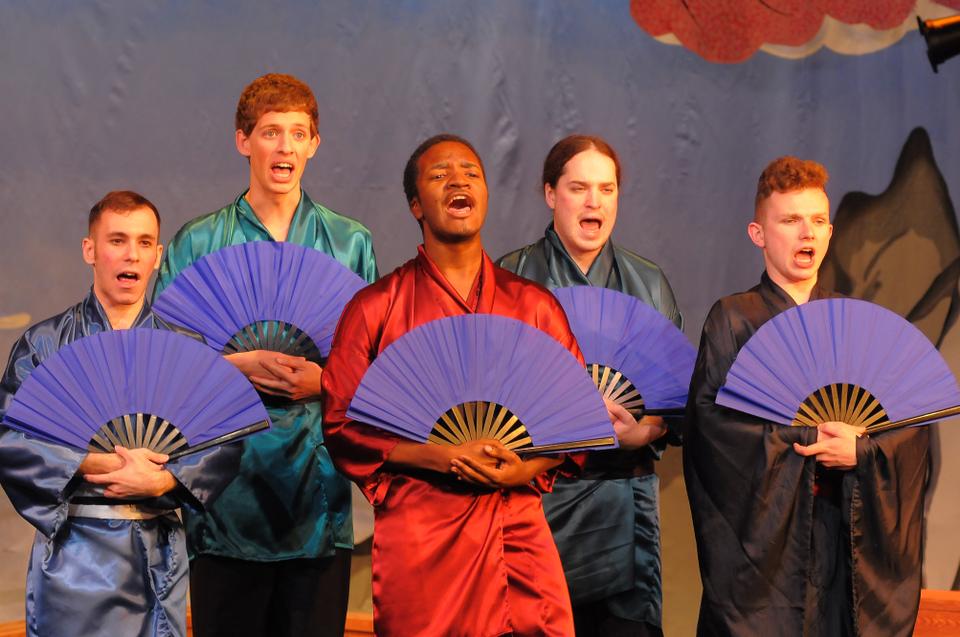 The Harvard-Radcliffe Gilbert and Sullivan players perform a scene from The Mikado, a 19th-century Victorian operetta set in Japan. The show opened Friday night at the Agassiz Theatre.
By Victoria Zhuang, Contributing Writer

What do you do when you’ve run away from a forced marriage to some butt-ugly hag and you’re in love with a country schoolgirl who is engaged to a local official you have to hide your identity from? Oh, and your father— who happens to be the ruler of Japan—talks with a British accent, despite his traditional Kimono. Director Katherine E. Moon ’14’s direction of “The Mikado: or, The Town of Titipu”—running at Agassiz Theatre until November 18—has some wickedly satirical answers. This operetta by the Harvard Gilbert and Sullivan Players is largely successful due not only to its talented singers but also the stunning scenery, which work together to bring out the work’s softly romantic charm.

Young Yum-Yum (Olivia R. Miller ’16), who loves Nanki-Poo (Jason S. Friedman ’16) and doesn’t want to marry the town executioner Ko-Ko (Kevin Q. Hilgartner ’16), has her right to wed Nanki-Poo challenged by the mature, ugly Katisha (Laura A. Peterson ’16). In the meantime Ko-Ko, who is really an ex-tailor and has no experience executing anybody, struggles to find a victim in time for the Mikado’s visit, since His Majesty has declared the act of flirting a crime worthy of capital punishment. Glorious mayhem, fit more for a British drawing room than a pagoda garden, ensues.

In terms of voice, although all the singers give commendable performances it is clearly Miller who deserves the most praise. As the leading soprano she maintains throughout a masterly balance of throaty vibrato, tonal control, and enunciation of the lyrics. She delivers an especially lovely solo in “The Sun whose Rays are all Ablaze” as she proudly rejoices in the consciousness of her youthful beauty. Similarly thrilling is Hilgartner’s baritone, and his acting of the hypocritical and cowardly Ko-Ko.

Eli E. Kahn ’13 has good vocals, but what really stood out was his acting. For the role of the deceptive Pooh-Bah, who embodies the play’s aspects of political satire and social snobbery, Kahn is delightful in his pontificating, insincere apologies. “I can’t help it,” he frowns, twirling his bamboo cane, “I was born sneering!” Friedman combines his pleasant tenor voice with comic facial expressions. During the song “A Wand’ring Minstrel I” Friedman lands on the phrase “And dreamy lullaby” with sly raising of the eyebrows, which adds a hint of adolescent lust to an otherwise innocent song.

For projection and vocal clarity, there were nonetheless some parts that might have done better. Wankel’s mellow bass was so low and faint that it was occasionally hard to make out what he was singing. Camille L. Crossot ’16 had lovely trills as Yum-Yum’s sister Peep-Bo, but her soft voice, like Wankel’s, was often unable to hold its own with the orchestra. Olivia M. Munk ‘16, as Pitti-Sing (the other coy sister), has a clear, sweet voice, yet her delivery at times wants some embellishment and consequently her singing strayed from the territory of the operatic into Broadway musical. But these are minor faults in roles otherwise well played; the overall charming effect was unspoiled, thanks to great acting all around.

If it is still possible to harbor some reservations—however small—about the cast, there is no doubt that “The Mikado” has produced an impressive set design. Designer Matthew G. Warner ’13 arranged an extremely beautiful stage, with a landscape of artificial green turf and an inset river of blue fabric overhung with fake cherry blossoms. In the distance, there is small wooden Japanese pond bridge, which was very realistically designed. During Miller’s “The Sun” aria, light radiated from a moon on the painted backdrop. which contributed to the show’s delicate, fluffy atmosphere of romance; rose-petals came through a netting in the ceiling and showered the cast as they completed the Act II finale together. In the foreground, a traditional Japanese housefront is equipped with a porch and a sliding door.

Several props were also notably well employed to bring out the humorous or romantic-sexual undertones of the lyrics. Colored fans, for example, were excellently incorporated and used to full effect to emphasize meanings behind the words. For example, whenever a couple is about to kiss the lady leans into the man’s face while opening her fan in front of them. When the townspeople shun Katisha, they rapidly open and slap shut their blue and white fans at her as they chant, “Away you go!” Katisha, who holds a black fan, skulks away. The difference in fan color emphasizes her status as unwanted older intruder on the mostly young community.

The production has a lot of prettiness and a lot of very impressive professional flourish. But apart from its lovely pictorial quality, this “Mikado” deserves admiration for a wonderful realization of satirical possibilities.