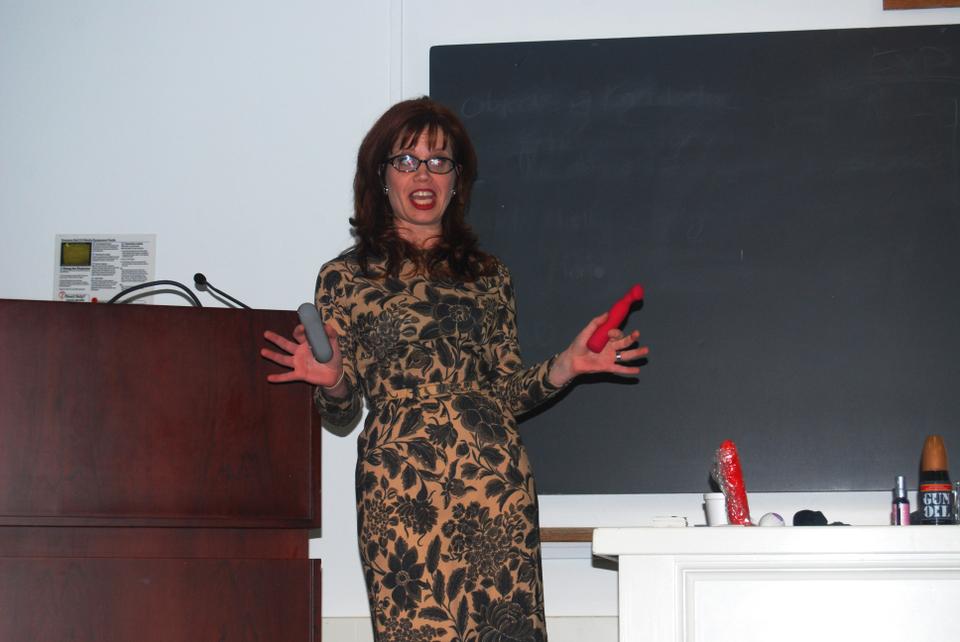 Megan Andelloux, a certified sexologist and sexuality educator, delivers an insightful and attention-grabbing talk about getting to know your sexuality. Andelloux’s favorite topic of discussion is the do’s and don’ts of sexual politics.
By Quinn D. Hatoff, Contributing Writer

Harvard’s first-ever Sex Week, which aims to promote thoughtful discourse on issues of sex and sexuality through education, conversation, and vagina-themed cupcakes, kicked off Sunday with a presentation by Megan Andelloux, a certified sexuality educator and sexologist.

The weeklong event, organized by the Sexual Health Education and Advocacy Throughout Harvard College, features speakers, seminars, and movies that explore topics such as love, sex, sexuality, gender, gender identity, and relationships.

SHEATH was co-founded earlier this year by Samantha A. Meier ’12 and Abby P. Sun ’13. Both Meier and Sun served as leaders in the Peer Contraceptive Counselors program, and Sun has organized the popular Female Orgasm Seminar for the last two years.

The duo said that though there are many events on campus dealing with sex and love, the programming was often targeted at one demographic.

“The QSA might host an event on sexuality, but it would only get publicized over the QSA list,” said Meier. “Sex Week provides a platform for groups already doing amazing work to consolidate resources and bring communities together.”

Meier said she sees the week as a unifying event for students.

“Sex Week connects people while demonstrating and continually reflecting that people are different,” she said. “Sex Week builds community in this very strong way in which you are engaging with something that is personal in an intellectual, deep, and rigorous way.”

Co-sponsors of the week’s events include the Harvard College Women’s Center, the Center for Wellness, the Office of BGLTQ Student Life, and the Office of Sexual Assault Prevention and Response.

“OSAPR is happy to be participating in Sex Week at Harvard College,” said Sarah Rankin, the Director of OSAPR, in a SHEATH press release. “We believe that talking about issues like honest communication, enthusiastic consent, and the opportunity for self-reflection fosters an environment that supports healthy sexual experiences.”

Given the many events to choose from during Sex Week, Meier and Sun said they hope students will take the opportunity to explore and keep an open mind.

“I think Sex Week is going to be an individual experience for students,” said Meier. “I think having an intellectual curiosity and not being afraid of going to something you might not think is relevant to your own life is what I would stress.”

Sex week events include a panel on discussing sex with your physician, held Monday at 6:30 p.m. in the Adams Lower Common Room. Tuesday will feature a lecture on criminal law and affirmative consent in Griswold 110 at 6 p.m. and a discussion on how to talk about sex in Science Center C at 8 p.m. on Tuesday.

Throughout the week, a SHEATH table on the Science Center lawn will feature free safer sex supplies, educational materials, and activities. Representatives from partner organizations including peer-counseling groups will be on site to answer questions.

“We don’t see this as just a onetime thing,” said Meier. “We see this as a start of a greater discussion.”