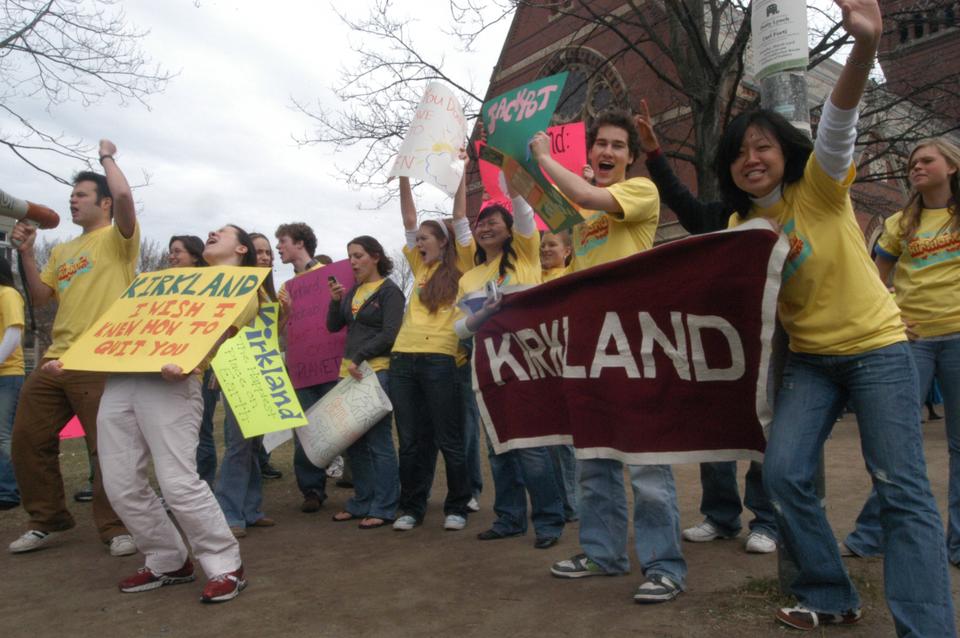 When President John F. Kennedy received his housing assignment, there was nobody in a lion suit to greet him at his Weld dorm room.

But this morning, new residents of Winthrop, along with the other 11 Harvard Houses, were met by cheers from House residents eager to welcome their new members.

Although House life has come to be seen as a defining part of the Harvard experience, the actual traditions of Housing Day, when all freshmen are placed in their future homes, are less than a decade old.

THE CREATION OF A HOLIDAY

When Judith S. Palfrey ’67 and John “Sean” G. Palfrey ’67 took the helm of Adams in 1999, Housing Day Eve was the more popular event, but only for a group of renegade House residents who participated in an unsanctioned race, called a “glorious competition,” to be the first to snatch the list of new freshmen assigned to their House.

Once upperclassmen got ahold of the information, they awoke their future housemates in the early morning, beating by hours the official letters from the administration, Sean Palfrey recalls.

But soon after, the College began to crack down on these late night adventures, promising to punish residents caught possessing the list or waking up freshmen. “The college wanted to regiment the way things were done,” Palfrey says.

Over the next five years, Palfrey says, Housing Day would become “progressively less and less interesting.”

Since then, House Committee members and upperclassmen have been responsible for “dorm storming”—delivering the letters that tell blocking groups where they will live for the next three years. At lunch, Houses commandeer tables in Annenberg to pass out t-shirts and swag to their newest members. The festivities continue well into the evening, with House-sponsored dinners, ice cream socials, and happy hours.

Dean of Freshmen Thomas A. Dingman ’67 says that new traditions like Housing Day dinners and welcome events are meant to encourage enthusiasm among even the most disappointed freshmen.

“Over time we said, ‘Let’s get a real welcome,’” Dingman says. “The welcome has developed into something that I think makes people that are assigned to a place they didn’t think they would enjoy feel, ‘It’s going to work out.’”

On Thursday evening, new Meese, crowned in gifts of antler headbands, will enjoy a bonfire and s’mores in the Dunster House courtyard. Down the river, future Winthropians can gather at a special Stein Club with a performance by Harvard’s own Motown and Soul band, The Nostalgics. And at the other end of campus, students assigned to Cabot will partake in a special community dinner.

Over the past few years, the efforts of House Masters and House Committees to reach out to new members of the community have become increasingly institutionalized.

“It makes people realize how lucky we are to have a warm, supportive, encouraging environment,” Dunster HoCo Co-chair Alissa N. Changala ’13 says of Housing Day traditions.

On the night of Housing Day, most Houses hold a dinner where freshmen can explore their new dining hall and a reception where they will be able to meet the House Masters.

During Cabot’s Housing Day dinner, House Master Rakesh Khurana says he likes to tell freshmen about the House’s storied past.

“We want to give people a sense of its rich history,” he says. “It is an invitation for people to join a community that will support their academic development, their connections with each other, and intense caring for their well-being.”

Each year, new Cabotians receive a an item that symbolizes the House and its fish mascot, something Khurana calls a “totem.”

In the past, Khurana says students have received Cabot key chains and ID card holders with the Cabot logo, along with goody bags filled with Swedish Fish.

“There is an intense amount of Cabot and Quad love,” he adds.

THE TWELVE DAYS OF HOUSING DAY

While House Masters have become increasingly involved in Housing Day activities, student anticipation of the event has stretched the holiday spirit of the event to the weeks and days before the last Thursday before spring break.

Many attribute the advent of inter-House spirit competitions to Mather’s 2008 email to the freshmen class with an attached video “Mather House: The Movie.” Over the past four years, this first video has sparked Houses across campus to produce YouTube videos touting the advantages of their respective homes.

In the past month, students have released a variety of videos: music videos including Mather’s “Call Me Mather,” movie spoofs such as Quincy’s  “Q-Men: Freshman Class,” and plays on internet memes like Pfoho’s “Sh*t River People Say.” Mather leads the Houses in this year’s battle of the videos, with 6,304 views on YouTube as of Wednesday at 10:30 p.m. Pfoho’s video comes in second with 5,256 views, followed by Quincy’s take on X-Men, which had 4,423.

And the gorillas, penguins, and polar bears have been spotted beyond the small screen, as students—and professors—clad in mascot suits have dropped in on large lecture classes this week.

On Monday, the Cabot House fish surprised students with a visit to Economics 10, and Mather’s Gorilla was spotted in Societies of the World 14: “The British Empire.”On Wednesday, Pforzheimer House Master Nicholas A. Christakis delivered his lecture for Sociology 190: “Life and Death in the U.S.: Medicine and Disease in Social Context” in a polar bear suit.

However, administrators say that some student celebrations—especially the Housing Day Eve River Run—take things too far.

Palfrey says that, in particular, the traditions of burning boats and praying to the river gods was “excessively celebratory.”

But administrators say they do not want to stifle the enthusiasm of students in their crackdowns.

As an alternative to River Run, the First Year Social Committee hosted a black light party in Annenberg, which included shirt decorating and a live DJ, according to an email from Dingman to the freshman class.

Changala adds that Dunster offered alternatives to River Run on the night before Housing Day.

“We do encourage them to come to the House the night before and meet people, but our House Masters are very keen on keeping people safe,” she says.

Palfrey also says he hopes that Housing Day can be a positive celebration for the community.

“Housing Day should be one of the great annual celebrations,” he says. “We should continue to enable it to continue being students’ favorite day.”

—Nathalie R. Miraval contributed to the reporting of this article.