Excited and Nervous, Class of 2016 Arrives on Campus 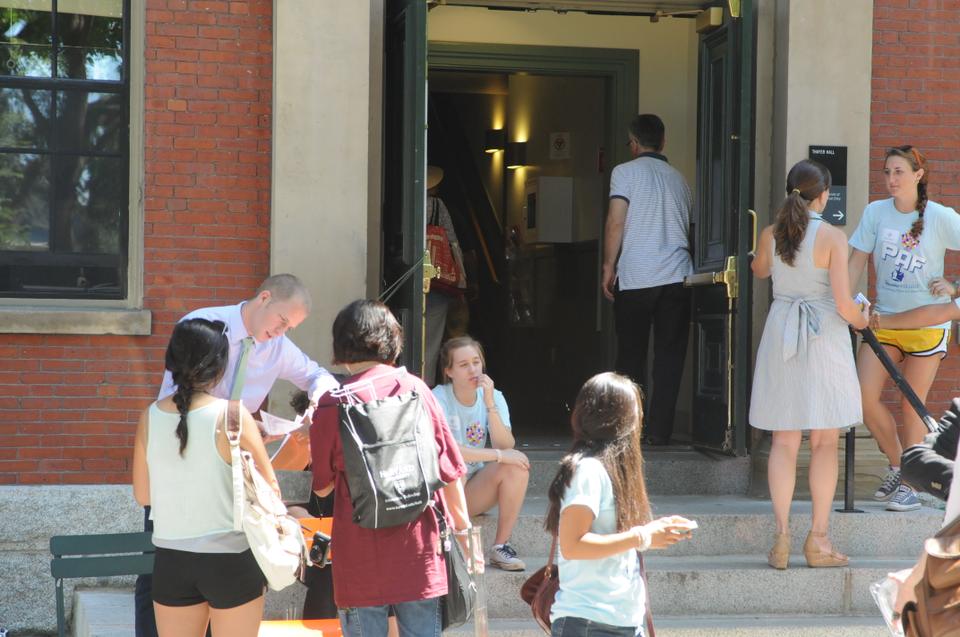 Freshmen moved into their dorms on Monday morning, marking the start of their freshmen year at Harvard.
By Adam J. Conner, Crimson Staff Writer

A flurry of activity erupted Monday morning in Harvard Yard as the Class of 2016 passed through Johnston Gate to move into the freshman dorms. The move-in marks the kick off of Opening Days, the formal orientation for all incoming first-years that occurs every fall.

New students said they felt a combination of excitement and nervousness as they hauled their belongings into dorms, greeted roommates, and settled into their new homes.

“It feels great to be here,” said A.J. Unitas, Jr. ’16, while moving into his room in Grays Hall. “You feel like you’re part of the community as soon as you enter the dorm.”

Unitas, who hails from Baltimore and is interested in Classics, said he was immediately intrigued by his new classmates. “Once you get past the awkward ‘so, where are you from’ initial conversations, it’s great to hear about people’s backgrounds—how they got here, what their passions are.”

Frank Tamberino ‘16, also from Baltimore, said he appreciated the relative peace and quiet in the Union dorms while he was moving into Hurlbut Hall.

“It was nowhere [near] as crowded as the Yard,” said Tamberino. “It was much more peaceful, so I wasn’t as nervous as I thought I’d be.” With a sister at MIT, Tamberino is familiar with the moving in process. Nevertheless, he said that parting ways with the family has not quite sunk in yet. “They’re here for a few more days, so it wasn’t really sad at all.”

Additionally, Tamberino said he has enjoyed meeting fellow Hurlbut residents and looks forward to the days ahead. “The guys on my floor all seem very nice,” said Tamberino. “Everyone is open to meeting new people.”

Some freshman have also arrived with a set of expectations of Harvard social life. Unitas, who caught a glimpse of the social scene during the Visitas weekend this past April, said he is not sure his impressions of Harvard's social scene is correct.

“I’ve heard about the social life from a few Prefrosh and mostly from ‘The Social Network’,” he said. “Essentially, I’m trying to find the gray area between what students tell me and Justin Timberlake attempting to conceal the cocaine on his fingertips.”

In the coming week, the Class of 2016 will attend a variety of orientation events geared to prepare them for classes and campus life.

But the primary event on students' minds was dinner—their first meal in Annenberg Hall as students. “It’s gonna be a zoo in there,” Unitas said.