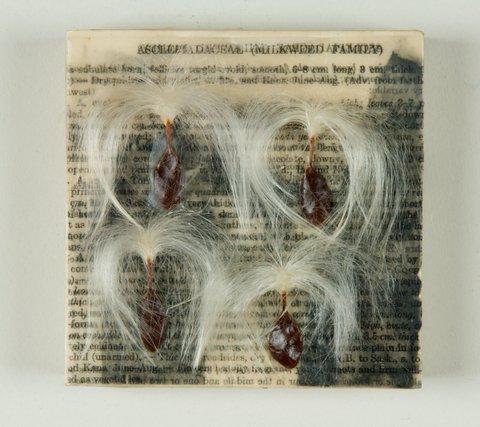 Susan Hardy Brown, a curatorial assistant at Harvard’s Arnold Arboretum, collages paper and plant matter that she has collected in 26 years cataloging specimens at the Arboretum. Hardy Brown creates her works through the “encaustic” technique, in which molten wax and resin are painted over a surface and sometimes embedded with other materials, like plants.
By Liz A. Melampy, Crimson Staff Writer

Descend into the depths of Harvard’s Arnold Arboretum, down a flight of stairs, and through basement corridors, and you’ll find the grotto of curatorial assistant Susan Hardy Brown. Her door-less room is filled with artwork, boxes of newspapers, photos, and plant specimens. Giant metal cabinets line one wall, full of flora waiting to be cataloged, and artwork from Hardy Brown’s most recent exhibit leans against the other. On her desk is a half finished specimen sheet, on which a plant is mounted with a label.

Hardy Brown’s artworks, which were recently exhibited in “Ex Herbario: Recent Works by Susan Hardy Brown” at the Arnold Arboretum’s Hunnewell Visitor Center, are collages of paper and plant matter stuck down by beeswax and resin. Like Hardy Brown herself, who plays dual roles as artist and curatorial assistant, her mixed-media artwork crosses disciplinary boundaries.

Hardy Brown studied painting at Syracuse University and Massachusetts College of Art and Design, from which she graduated in 1969 and 1975 respectively. She found her place at the Arboretum through her love for art. “With my background in the arts, preparing the specimens was really hands-on and something I really enjoyed and figured I could do,” Hardy Brown said. She volunteered for a project at the Arboretum in 1985, and when she was looking for a long-term job, she says, the Arboretum felt like a niche where she could keep nourishing her artistic side.

Almost all of the materials Hardy Brown collected for “Ex Herbario” came from the packaging and labeling of the plant specimens she has worked with for 26 years. Specimens reach her two different ways: through collection, which is paid for and sponsored by Harvard, and through exchange with other herbaria and arboretums around the world. The exhibit title “Ex Herbario” came from the latter. “When there’s an exchange and the specimen is sent, it will sometimes say the institution, ‘ex herbario,’ and then the Latin name,” she said. The title is fitting because materials from the exhibit came from the herbarium, she says. ”And I just liked the way it sounded,” she added.

Hardy Brown creates her pieces through the “encaustic” technique, in which heated adhesives are painted over a surface and sometimes embedded with other materials—in this case, paper and pressed plants in a mixture of beeswax and damar resin. The most common plant packaging she comes across is newspaper—“That’s the most universally available material, and it’s absorbent and it’s cheap,” she said—but other materials she has acquired include delicate rice papers and snack food packaging. “Working here all these years and saving different, interesting materials—they lent themselves to the technique I was using, because you can preserve and layer [them],” she said.

She saved newspapers, wrappers, and extra plants sent from a variety of times and places. Using these different materials adds a global and historical element to her work. When she got the job, she says, there was a 30-year backlog of specimens, still wrapped in newsprint, waiting to be cataloged. “I’m down here in this very meditative environment, and I’m opening up these folders and reliving the Vietnam War,” Hardy Brown said.

In one of her pieces, she overlaid news clippings from that time period in English, Vietnamese, Spanish and other languages, then adorned the newsprint collage with pieces of collected plant matter. She has also made replicas of Buddhist prayer flags from Thai snack wrappers, a quilt-like piece based around the patron saint of Cuba, and what she calls an homage to Jackson Pollock—a small piece in which she wildly arrayed strings from plant labels and then glued them down in the encaustic technique.

Danielle Hanrahan, a curatorial assistant for the Harvard University Herbaria who also helped Hardy Brown set up the “Ex Herbario” exhibit, says Hardy Brown’s artistic inclinations in turn inform her work at the arboretum. “In some ways, I think that an art background—being skilled with your hands and using tools and knowing materials and having an aesthetic sensibility—is maybe more important than knowing the Latin names of all the plants that you’re actually mounting,” Hanrahan said.

Hardy Brown says she will likely continue to use materials she collects in the Arboretum for future encaustic artworks—“I’ve become the ultimate recycler,” she said. “This stuff is being used, and then I’m reusing it in another way altogether.” But her work does not just provide the components of her art, she says—the Arboretum also inspires her. “It’s been a very rich environment to work in, and the actual work that I do here is kind of quiet, contemplative, meditative,” she said. “It leaves my mind free."