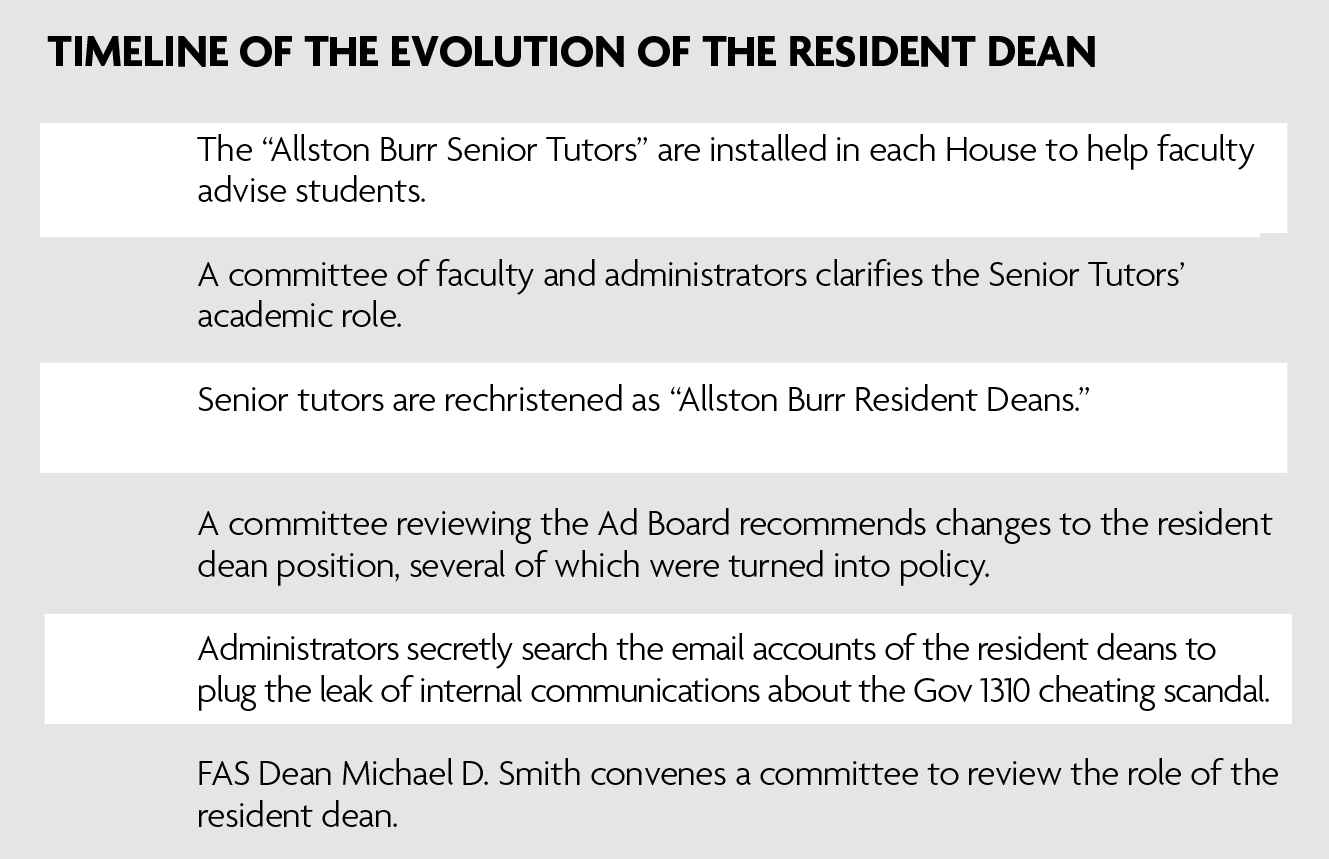 A committee has been convened to formally review the position of the resident dean, continuing a conversation about the dean’s role in Harvard’s administrative hierarchy that was reignited by last spring’s email search scandal.

Appointed by Dean of the Faculty of Arts and Sciences Michael D. Smith this past summer, the committee will examine the deans’ “distribution of academic and administrative responsibilities, criteria for review and reappointment, and opportunities for training and professional development,” according to Nina Zipser, dean for faculty affairs and planning.

The committee will make recommendations to the Dean of the College, Zipser wrote in an email, although there is not a “specific timetable” for delivering those recommendations, according to FAS spokesperson Jeff Neal.

The review of the position comes months after news broke in March that administrators had secretly searched the administrative email accounts of the resident deans in connection with the Government 1310 cheating scandal. The revelations sparked controversy that was escalated in April when then-Dean of the College Evelynn M. Hammonds announced that she had also searched the faculty email account of a single resident dean without Smith’s permission, breaking faculty email privacy policy.

In the wake of these revelations, administrators did not immediately clarify whether or not the deans are considered members of the faculty and fall under the FAS email privacy policy. Sharon Howell, the Adams House resident dean currently on sabbatical, said at the time that the deans are indeed faculty, a fact that was eventually acknowledged by Smith and Hammonds.

In an interview Wednesday, Sean Palfrey ’67, co-master of Adams House, suggested that last year’s email searches contributed to the decision to review the resident dean position. Neal did not confirm or deny that the committee was created in response to the searches, writing in an email that “the committee was formed because Dean Smith wanted answers to a number of questions,” citing the review areas named by Zipser.

As the committee moves forward with its work, it plans to consult with College administrators and House masters, Zipser wrote. The committee will also meet individually with resident deans, whose perspectives she called “vital to this process.”

The review coincides with transition in University Hall.

Interim Dean of the College Donald H. Pfister was appointed in July after Hammonds stepped down–some community members have said as a result of the scandal, though she has denied that claim–and Pfister has said he will serve in the role for no more than a year.

Palfrey questioned the review’s timing in light of the lack of a permanent College dean.

“I’m not entirely sure that it’s wise in terms of the timing, in that I would like the incoming dean to be a part of that conversation,” Palfrey said.

Palfrey said that administrators have been having a conversation about the proper role of the resident dean for years. Most recently, in 2009, the Committee to Review the Ad Board issued a report recommending a number of changes to the position, several of which were enacted as policy. Resident deans now have extended term limits and report directly to the Dean of the College, among other changes to the role. Resident deans also currently act as advisers in the Houses, sit on the Administrative Board, and teach academic courses, among other responsibilities.