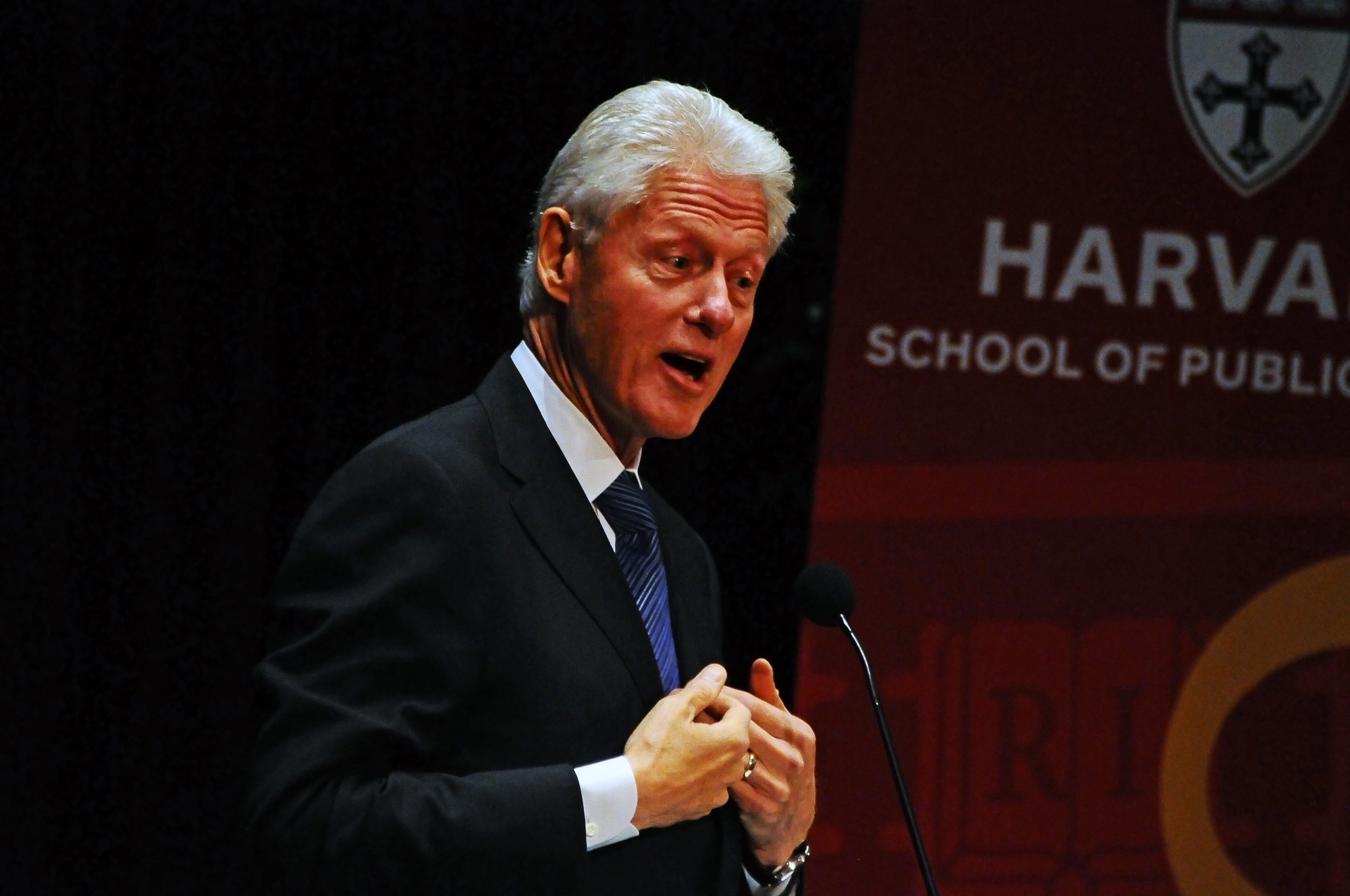 President Bill Clinton speaks about the importance of recognizing our similarities in fostering human and environmental well-being. Clinton and his daughter, Chelsea Clinton, were honored by the Harvard School of Public Health on Thursday for their efforts to further public health, including among other things the distribution of AIDS medication.
By Fatima Mirza, Crimson Staff Writer

Former United States President Bill Clinton took the stage at the Harvard School of Public Health’s centennial anniversary ceremony on Thursday, celebrating the success of public health policy reforms that have saved the lives of millions and expressing high hopes for the work of future generations.

“Today you have recognized through us what the Harvard School of Public Health is all about—elevating our common humanity and building networks of cooperation in a world where we are more interdependent and power is more diffuse,” said Clinton, who was one of three recipients of the school’s Centennial Award.

Thursday’s ceremony recognized the impact of four individuals who embody the “high ideals and practical determination” of the institution, Dean of HSPH Julio Frenk wrote in the program for the afternoon’s events.

Clinton’s daughter, Chelsea, was the recipient of the inaugural Next Generation Award, which honors individuals under the age of 40 for their accomplishments in the sphere of public health. Frenk introduced Chelsea Clinton and unveiled a brief montage detailing her efforts to increase healthcare access in the developing world, fight childhood obesity, and address preventable diseases.

“We have not succumbed yet to cynicism, inertia, or patience,” Chelsea Clinton said to her audience. “I hope that all of us, particularly those of us who are not so young, will engage young people and listen to their voices.”

According to Frenk, the Next Generation Award was given to Chelsea Clinton for her leadership in inspiring young people to make universal health a global priority.

Frenk then announced the three recipients of the Centennial Medal, a one-time award honoring global health reform and advocacy efforts. The medal was specifically developed to commemorate the 100-year anniversary of the HSPH.

“Health for us is crucial and central, but global health is linked to human rights, education, and the environmental concerns that we are creating in the way that we are dealing with each other and with the planet,” said the first honoree Gro H. Brundtland, an HSPH graduate who formerly served as the prime minister of Norway and as the first female Director-General of the World Health Organization. “The [worst] thing that is challenging all of humanity is climate change.”

Jim Y. Kim, another HSPH graduate who currently serves as President of the World Bank Group, was the second Centennial Medal honoree.

“Your professors are going to tell you, with very good reason, to focus on a problem that is narrow with clear boundaries, so that you can get your papers published and get tenure and there is a place for that,” said Jim Kim, president of the World Bank Group. “But the one thing I would tell you is at some point to tackle the most difficult, seemingly intractable problem you can find.”

Frenk, who presented the awards on behalf of the school, said that the despite its practical difficulties, the field of public health presents an opportunity to effect widespread change.

“A fundamental dissatisfaction with the way things are and a stubborn determination to narrow the gap between what can and what is actually being achieved are important characteristics for a career in public health,” Frenk said. “To open this literally once in a century celebration, we are honored to recognize the accomplishments of four role models.”

President Clinton, the final award recipient of the ceremony, reflected on the legacy of the honorees and their impact on coming generations in his acceptance speech.

“The 21st century will truly belong to people like my daughter, of whom I’m so proud, and to the students,” said Clinton. “And those that think that what we have in common is more important than our differences”.

Though his speech was largely characterized with positivity, Clinton had to share his one true disappointment.

“You can see we’re all friends,” said Clinton of the award recipients. “The only thing we don’t have in common with the other honorees is that we don’t have degrees from Harvard. I feel kind of cheated.”