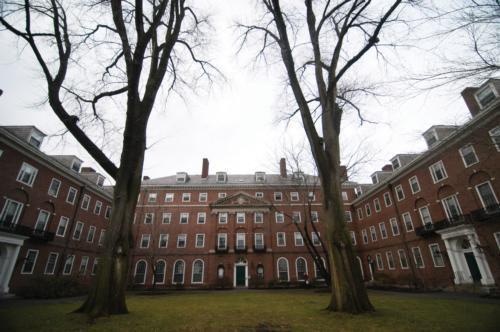 Winthrop, pictured in a Crimson file photo from 2009, is the fourth House in line to be renovated as part of the House renewal project, the Winthrop House masters announced to the House community Wednesday evening.
By Laya Anasu and Madeline R. Conway, Crimson Staff Writers

Winthrop House will be renovated in 2016-2017, a timeline that will make it the second full upperclassman House to undergo construction as part of Harvard’s more than $1 billion House renewal project.

Winthrop’s planned renovation, announced in an email from the Winthrop House masters to the House community Wednesday evening, will follow a one-year break in House renewal construction following the renovation of Dunster House in 2014-2015, meaning that the 2015-2016 academic year will represent the first extended pause in the project. Winthrop will be the fourth House to be renovated at least in part under the project, which is intended to eventually restore and modernize all 12 upperclassman Houses.

According to Faculty of Arts and Sciences spokesperson Jeff Neal, Winthrop residents displaced by the construction will live in the same swing space housing planned to be used for Dunster—the building that previously housed the Inn at Harvard and Harvard Square apartment buildings Ridgley Hall, Fairfax Hall, and Hampden Hall.

In 2015-2016, as administrators prepare for Winthrop’s renewal, they will assess House renewal’s first three renovation projects—Quincy’s newly renovated and renamed Stone Hall, which opened for students this fall; Leverett’s McKinlock Hall, which is currently undergoing construction; and Dunster House, which will be the first full House to be renewed under the project.

“We have believed from the beginning that we would need to step back after the completion of the first full House to very strategically and deeply assess the first three projects and to ensure those lessons are applied to the future,” Dean of the Faculty of Arts and Sciences Michael D. Smith said in a statement to the Harvard Gazette, the University’s official news publication.

Smith also said that one lesson administrators have learned from the process so far is that “preparation for the renewal of a full House is better done over four years, not three.”

After months of planning, administrators announced in July 2012 that they would begin renewing Dunster two years later. Wednesday’s announcement about Winthrop’s renovation plans comes more than two and a half years before that construction is planned to begin.

“[Co-master Stephanie Robinson] and I are looking forward to working with University officials, as well as the architects and designers, on the design of the House, and we think it's going to be a huge benefit to generations of Winthrop students,” Sullivan said. “We are very much looking forward to starting the process.”

Harvard’s House renewal project is being funded in part by The Harvard Campaign, with $400 million of the project’s more than $1 billion cost coming from the just-launched FAS campaign. The rest of the project will be funded by a combination of endowment funds, debt financing, reserves, and other cash.