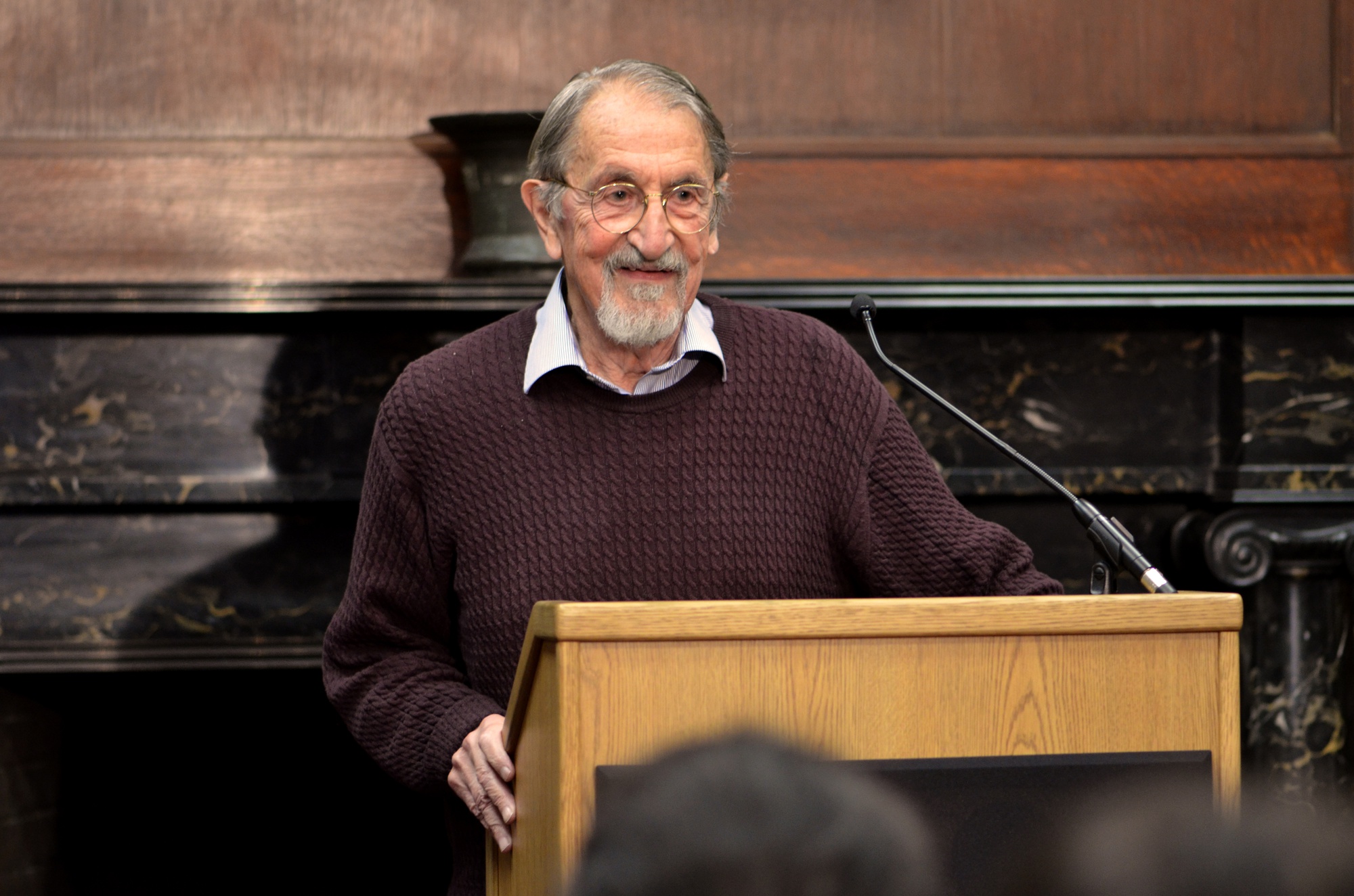 Chemistry professor emeritus Martin Karplus ’51 speaks to the media in the Harvard University Chemistry Library on Wednesday, just hours after the Royal Swedish Academy of Sciences announced that he had won the Nobel Prize in chemistry.
By Kruti B. Vora, Crimson Staff Writer

Chemistry professor emeritus Martin Karplus ’51 was one of three researchers to win the 2013 Nobel Prize in chemistry, the Royal Swedish Academy of Sciences announced Wednesday.

Karplus, along with Michael Levitt of Stanford University and Arieh Warshel of the University of Southern California, won this year’s prize for developing computer simulations using classical physics and quantum mechanics that could improve scientists’ understanding of complex reactions and lead to the development of new drugs.

“I think this Nobel Prize is important,” said Karplus during a press conference Wednesday. “Obviously it’s very nice for me and my co-winners, but the real importance is the following: that unlike many Nobel Prizes, this means something for the field in which I work.”

He began developing his methodology in the 1970s, and described the award as “really the consecration of [his] work in the field.”

As a joint winner, Karplus will get a share of the $1.2 million that comes with the prize.

Karplus now studies the electronic structure, geometries, and dynamics of chemical and biological molecules, according to his biography on the website of the Department of Chemistry and Chemical Biology. He focuses on using microscopic approaches to solve problems in solution chemistry and also studies enzyme reactions and the effects of mutations on proteins and nucleic acids.

Although Karplus started his research by testing smaller and simpler systems, he said his methods are now being used to help calculate the motion of atoms in proteins.

According to Karplus, his research has been used in health fields in ways ranging from helping design ligands to inhibit enzymes, to finding inhibitors for amyloid fragments--proteins associated with Alzheimer’s disease.

Karplus, who was born in Austria in 1930, said he developed a love for science at an early age. After moving to the United States and attending Harvard as an undergraduate, Karplus began to narrow his academic interests.

As a Ph.D. student at the California Institute of Technology, Karplus was the last graduate student to work under two-time Nobel laureate Linus Pauling, who was known for his research in chemical bonds and complex structures.

During the press conference, Karplus encouraged prospective chemists to “be courageous” and think deeply about the questions biology has the potential to answer.

“Originality and hard work are the two things that are really important,” he said. “There are many exciting problems in biology, but for many of them you can’t do anything with our [existing] methods.... And so a very important part in working in this area is realizing not only that a problem is interesting, but that what we can do can actually give answers that are important.”