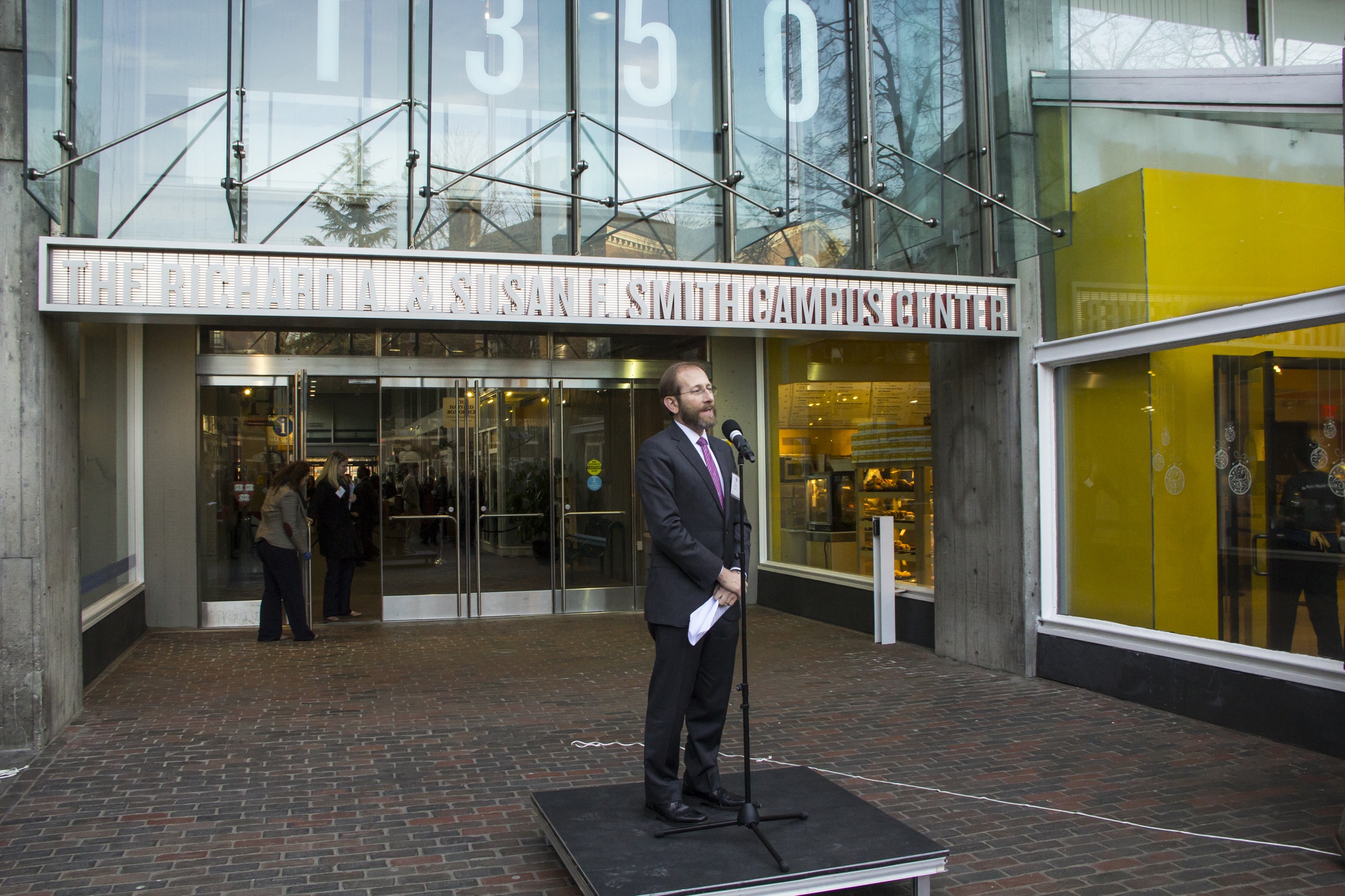 University Provost Alan M. Garber ’76 announces the renaming of the Holyoke Center in November. The first three stories of the building will be transformed into a new campus center expected to open by 2018.
By Nikita Kansra and Steven R. Watros, Crimson Staff Writers

A campus center located on the first three floors of what was formerly called the Holyoke Center will undergo construction beginning in 2016 and likely open in 2018. The Richard A. & Susan F. Smith Campus Center, as the entrance to the building now reads, is named after donors Richard A. Smith ’46 and his wife Susan F. Smith, and will be designed by Hopkins Architects, a London-based firm that has previously developed buildings for Yale and Princeton, the University announced Thursday afternoon.

Thursday’s announcement, which did not name the size of the Smiths’ donation, marks the first time the project’s construction timeline and the names of its donor and architect have been released. The news comes after Faust called the construction of a campus center a capital campaign priority last year and confirmed a donation for the center earlier this fall.

The center’s name and benefactors were officially unveiled at an event in front of the former Holyoke Center on Thursday afternoon. Following remarks from University President Drew G. Faust, University Provost Alan M. Garber '76, and the project’s head architect, the Smiths’ children stepped forward to pull down a red curtain above the building’s front doors and officially reveal the center’s new name.

In her remarks at the event, Faust referenced her vision of “one University” and said that the Smith Campus Center would serve as a “physical embodiment of that dream.”

“The Smith Campus Center will draw members of the University community together and serve as an important common space for everyone to enjoy and use,” Faust said in a University press release. “We are very pleased to be moving forward with planning, and we are eager to engage students, faculty, and staff in the important work of creating a flexible and welcoming campus hub.”

According to the press release, the Smith Campus Center will offer food service, lounge, and study areas for students, faculty, and staff. The first floor of the center, which will continue to boast a variety of retail and food service options, will remain open to the public. In addition, architects will include space for exhibitions, events, and performances.

In an interview with The Crimson Thursday morning, Faust said that she was “exhilarated” by the prospect of a campus center.

She said that in early planning discussions, the architects have been very “imaginative” in reconceptualizing the Holyoke Center space—the lowest three of the building’s 10 stories—for student and campus use. She added that the consultation and planning process, expected to last a year and a half, will involve students through committees and advisory groups.

In an interview Thursday morning, Interim Dean of the College Donald H. Pfister expressed his wish for the campus center to complement rather than recreate existing common spaces.

While the Smiths asked the University not to disclose the size of their contribution, which enabled the campus center project to move forward, Faust called the donation “extremely generous.” The couple has previously donated to Harvard and its affiliated facilities, and Richard Smith has served on both the Harvard Corporation and the University’s Board of Overseers.

“Of all the institutions one can think of, Harvard has been the leading developer of the future leadership of this country, if not the world,” he said in the press release. “To be associated with it has been a great privilege and to support it in a meaningful way...will be a capstone in my relationship with Harvard.”

The creation of a campus center stems from the University’s Common Spaces program, an initiative launched by Faust in 2009 to guide the development of community-oriented spaces on campus. Most recently, the Common Spaces program has spurred renovation of the Science Center Plaza and the opening of the Memorial Church “porch” in Tercentenary Theatre.