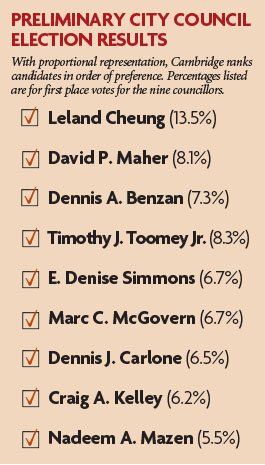 The preliminary vote total does not include about 700 ballots that will be counted on Wednesday, and due to the close nature of the race, the results could change.

Cambridge employs an electoral system that allows voters to rank their candidates. If a candidate receives more votes than he or she needs to be elected, surplus ballots are passed on to the next candidate still seeking votes. If a candidate is the lowest vote-holder following a given round of counting, he or she is defeated and the ballots in his or her stack are redistributed to the candidate ranked next on those ballots. This process continues until nine councillors are elected.

This complicated system has, in the past, led to invalid ballots—as in when citizens attempt to rank multiple candidates as their first choice—but, according to this year’s preliminary results, no ballots were invalidated.

Cheung, a graduate of the Harvard Kennedy School, for the second straight election had the strongest performance of the night, receiving 2,317 first-place votes—900 more than any other candidate received.

“I am very thankful to all the voters. It’s a strong response that shows that people like the ideas I stand for and what I bring to Council,” Cheung told The Crimson Tuesday night. “I’m going to get as much done as possible for the residents and for the city they work, live, and play in.”

The city saw an 11-percent increase in preliminary turnout over the last municipal election two years ago, which David Anderson, a precinct official at Graham and Parks School, described as “above-average.”

Cambridge’s voters told The Crimson that issues like development, housing, and education brought them to the polls on Tuesday to elect representatives to the City Council and School Committee. Specifically, voters said they were concerned with affordable housing, loss of green space, and construction and infrastructure.

“I live directly across from the Law School, and I’ve been dealing with construction for the last six years,” said Mary Allen Wilkes, a Cambridge voter and 1975 Harvard Law School graduate. “I wish they would coordinate public, private, and university construction. I really don’t think they talk to each other.”

A veteran of the Cambridge School Committee, preliminary 9th place finisher McGovern campaigned on increasing availability of low- and middle-income housing and expanding the availability of quality early childhood education.

“I want to support families in Cambridge who are struggling with poverty and make sure every person has an equal opportunity to take advantage of everything that Cambridge has to offer,” McGovern said.

At Harvard, the election generated interest among students in large part because of the campaign efforts of Logan E. Leslie ’16, who ran for the Council on a platform focused on student voice in the city. His efforts fell short, as his 482 first-place votes and 543 final votes placed him 14th in the election.

“There has been a lot of student interest, which you don’t normally see,” said Daniel R. Ki ’15, who voted in the election. “The fact that a student is running for City Council has generated a lot of sparks and conversations on campus.”

Some citizens like Jeff Spurr, a former member of Harvard Art Museums’ Collections Committee, said he looked to vote for a candidate who demonstrated responsiveness to citizens and progressive political values.

Others voted to support friends running for the Council.

“Two of my friends are running for City Council. I had to come here, or they would’ve killed me,” said Henry Louis Gates Jr., a university professor.

“The school system is changing dramatically,” said Irving Allen, a Cambridge resident. “I have kids in Cambridge schools and want to make sure they’re supported…. This election is crucial.”

The final count will be tallied on Nov. 15. The mayor of Cambridge, who serves as the chair of the Council and the School Committee, will be elected by the Council members after they assume their positions in 2014.