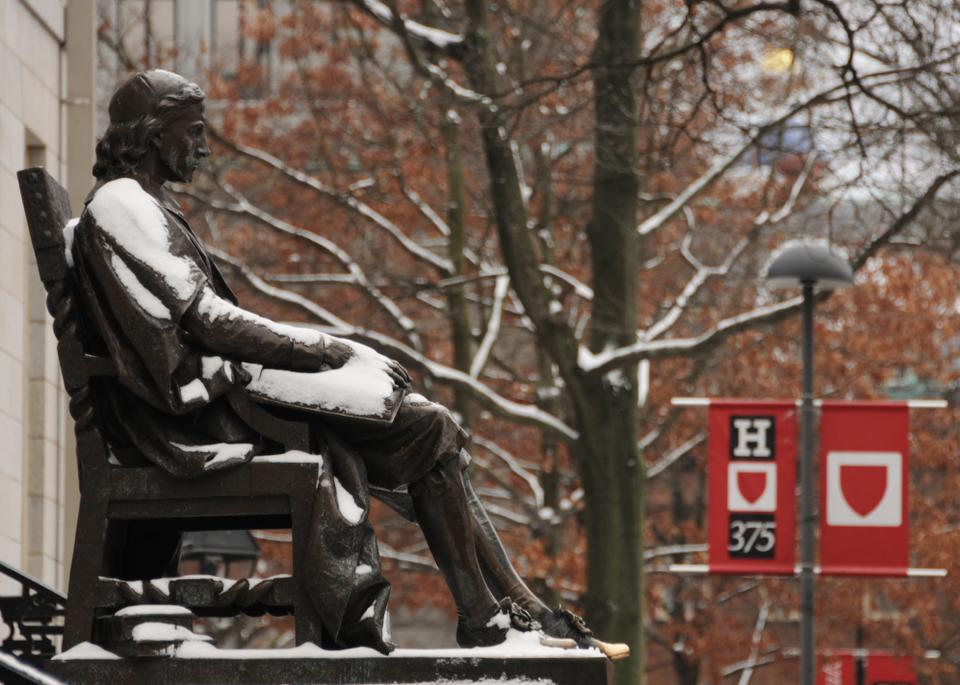 Nearly two feet of snow coated Harvard’s campus this weekend as winter storm “Nemo” became Boston’s fifth-largest snowstorm on record, with 24.9 inches of snow measured in the city according to official reports.

All non-residential University facilities including Harvard’s libraries closed at noon on Friday in compliance with a blizzard warning issued by the National Weather Service. The University shut down all shuttle operations at 3:30 p.m. after Mass. Governor Deval L. Patrick ’78 declared a state of emergency and banned all non-emergency vehicles from state roads.

Harvard Campus Services—which is responsible for facilities upkeep and snow removal—spent Thursday engaged in various activities preparing for the storm, including inspection of energies and utilities, inventory of supplies, and staffing accommodations. According to Harvard Director of News and Media Relations Kevin Galvin, employees continued to work throughout the weekend to clear roads and walkways across campus, even during the height of the storm.

The statewide road ban, combined with the shutdown of the MBTA Friday afternoon, created a tremendous obstacle for Harvard University Dining Services as staff workers were left stranded on campus and other employees had no way to travel to Harvard and offer relief. As a result many workers who started their days at 6 a.m. on Friday did not leave until Saturday night.

According to HUDS spokesperson Crista Martin, staff members stayed overnight in hotel rooms and open House dorms to ensure continued service in the dining halls. HUDS reduced its menu offerings and switched to disposable dishware in an effort to cope with the staff shortage.

In many Houses, students and other House residents pitched in and helped out dining workers.

“The staff has been doing a terrific job and we did not even notice that they were undermanned or struggling,” Walsh said enthusiastically. “But when we heard they could use the help, it was a no-brainer, plus, we thought it could be fun.”

“Cleaning dishes and taking out the trash are chores I do at home,” he said as he emptied a bag of trash from the dining hall during his impromptu shift. “The dining staff here is so awesome and I would do anything I could to help out.”

Others students spent their time during the storm enjoying the snow day in more conventional ways.

With intense snowfall and high winds starting Friday afternoon and lasting throughout the night, many students reported that they remained indoors, watching movies, playing games, hanging out with friends, or studying.

Though most students could remain warm in their rooms, the heat in much of Ridgley Hall—one of three buildings designated as swing housing during the ongoing renovation of Old Quincy—stopped working on Friday night and was not fixed until the following afternoon, making for a frigid night for its residents.

“I noticed it getting pretty chilly in the room early Friday night,” recalled Emma R. Lipshultz ’15. “I didn’t think anything of it until I woke up on Saturday and was freezing, even with two sweatshirts and wool socks on.”

Katherine M. Kulik ’15, a Crimson photography editor, told a similar story. Kulik said she and other Ridgley residents tried to stay out of their rooms and enjoy the warmth of the main Quincy House building in rooms like its dining hall and Junior Common Room.

As the snow subsided on Saturday, groups of students could be seen across campus enjoying the winter wonderland that the storm left behind. Snowmen of all shapes and sizes began popping up in House courtyards, snowball fights broke out in the Yard and MAC Quad, and students used dining hall trays to sled down the snow-covered steps of Widener Library.

Students involved in varsity sports also got the opportunity to enjoy some of the fresh powdery snow, as many scheduled varsity competitions were either canceled or postponed due to weather.

Melissa L. Mullins ’14, a varsity basketball player, commented on the constantly changing schedule and how strange it was to wake up with a “game day mentality” only to find out that it would not be game day after all. For some players this happened multiple times as games were postponed on both Friday and Saturday.

“It was obviously a bummer to have games pushed back after spending the day preparing, getting excited to play, and even having our pregame meal,” Mullins said. “But it didn’t affect us because not only did we get to play in the snow, but we had three days to prepare for Cornell instead of just one.”

After spending the weekend surviving Nemo, the University stands poised to return to life as normal Monday. According to an email sent Sunday evening by Associate Dean of the College John “Jay” L. Ellison, shuttle service resumed Sunday afternoon and classes will follow a regular schedule on Monday,

“Harvard University and the Faculty of Arts and Sciences will resume normal operations on Monday,” Ellison wrote.

—Staff writer Rachael E. Apfel can be reached at rachaelapfel@college.harvard.edu.