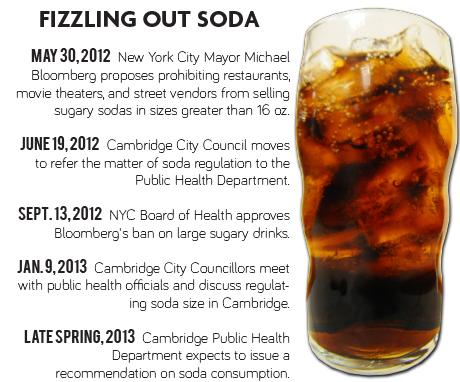 Councillor Marjorie C. Decker, Chair of the Cambridge City Council’s Community Health Committee, said she hopes to meet with the business community in the next month and assemble a task force on the soda limitation shortly thereafter. But according to Public Health Department spokeswoman Suzy Feinberg, the department will not submit its formal recommendations to the city until late spring­­—nearly a year after the City Council first requested a recommendation on soda and sugar-sweetened beverages in June 2012. That request came soon after Mayor Michael Bloomberg of New York City proposed capping the size of sodas served in New York at a volume of 16 ounces.

“One of the key issues is whether this type of restriction will result in lower consumption of sugary beverages and reduction in overall caloric intake,” Feinberg wrote to The Crimson in an email. At a meeting with the Council’s Public Health Committee on Jan. 9, the department raised doubts that the proposal would diminish soda intake.

But fellow Councillor Craig A. Kelley said he would expect a soda regulation to pass if it were put before the City Council. And Decker said that the final decision does not rest exclusively with the Public Health Department. “This is not [Jacob’s] decision; this is the Council’s decision,” she said.

The Public Health Department and the City Council expressed similarly different opinions in 2006, when the Council asked for a recommendation on the topic of trans fat regulation in Cambridge restaurants.

The department recommended educating restaurateurs about the dangers of trans fat but would not endorse a full ban on trans fats, saying that a lasting relationship with the restaurant community outweighed the short-term benefit of banning trans fat use.

The following year, the City Council established a task force that ultimately did ban trans fat from Cambridge restaurants.

“When I brought the order in to ban trans fat, the Public Department was not sure,” said Decker. “Ultimately, the whole state decided that Cambridge was right.”