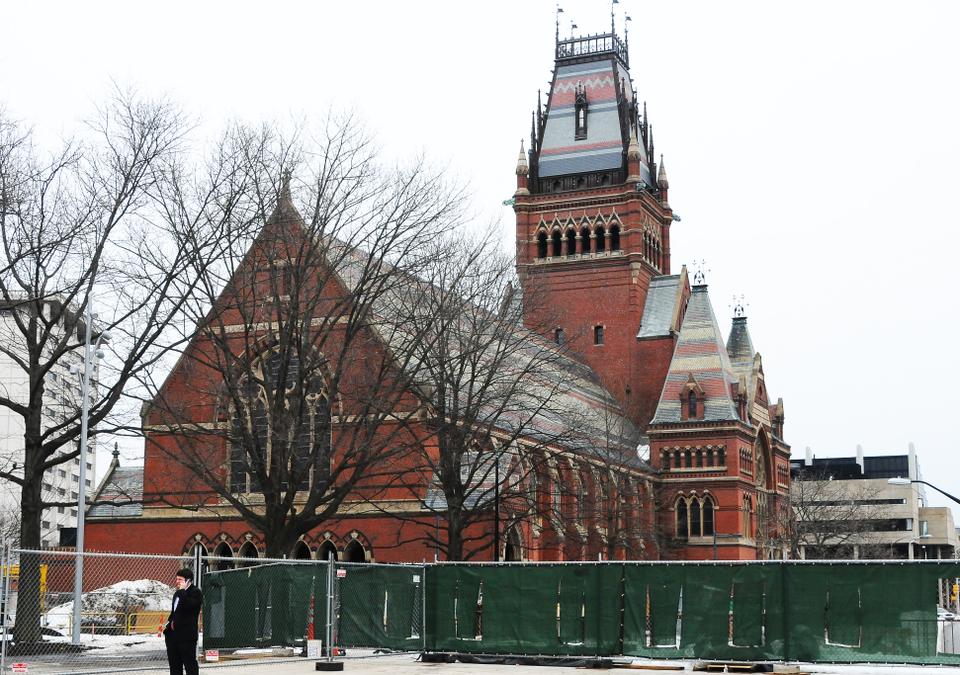 FM returns to The Crimson’s archives to explore Memorial Hall’s history and to imagine the memories made there through the years.
By Olivia M. Munk

Memorial Hall—a massive structure that commemorates the lives of Harvard alumni lost in the Civil War, feeds freshman, and attracts performers from around the world to the Sanders Theater—has undergone a series of changes since its conception. FM returns to The Crimson’s archives to explore Memorial Hall’s history and to imagine the memories made there through the years.

This massive building—reminiscent of a church, topped with peaks and spires—commemorates those lost in the War. It is still somewhat controversial that only the Union men are remembered, a fact that is sure to be one of the topics under discussion at the Dining Club tonight, perhaps murmured under hushed breath while students are served their roast beef.

The largest room in Memorial Hall is a splendid place to host the new dining club, many students think; the arching ceilings, high windows, and assorted paintings remind its members of their stern and white-wigged ancestors. Among the diners are men who carry themselves with a similarly luxurious air, speaking of their fathers’ plantations back at home. They whisper disdainfully of the outcome of the War, or lament that their deceased kin are not memorialized by the Hall.

After several meetings of the Dining Club, it becomes evident that even these men, who seem to blur together in a general clatter of spoons and forks, laughter and shouts, can be dichotomized into three distinct types, categorized and analyzed by current Crimson editors. One kind was influenced by his childhood etiquette classes and eats very delicately: His elbows remain off the mahogany tables, napkin tucked into collar, a flurry of “please” and “thank you”s. A second type appears to be consumed with the notion that this is his last meal, that his fellow diners are his disciples in this da Vinci moment.

He eats at an alarming pace, asking for more before he has swallowed whatever grotesque matter he is chewing. This type uses his napkins the least, although he appears to require them the most. A third type forgets the existence of knives and mashes meals with the side of a fork. An unconscious effort, yet a messy and undignified one all the same.

Both those who criticize and favor the club worry about its future attendance rates; it is costly to dine in the great Hall. It has been suggested that games and prizes be administered at each meal in order to ensure attendance. Students doubt that Memorial Hall will ever be a major dining destination.

April, 1932: Memorial Hall has recently been hit with a series of pranks.

The most notable of these pranks featured an ancient clapper’s being stolen from Memorial Hall’s bell. The bell’s newfound silence, while welcomed by those in dorms near the building, is causing quite a ruckus among the staff and administration. It appears that the thieves gained entry into the Hall through the most innocent of entrances—Sunday morning church services, of all things—to then commit the peculiar sin of lowering the entire bell apparatus and removing the clapper.

The students have found it strange not to hear the tolling of the bells these past few days. Weekly practices at the pistol range in Memorial Hall’s basement seem somehow changed—many have come to rely on the vibrations that seem to shake the whole foundation as the signal for the end of their sessions. The lack of bells is a reminder of the oddity of the structure itself: a pistol range in the basement, an almighty bell above, church services in between.

One question at hand concerns how the robbers managed to steal such a large piece of equipment while the rest of the students sat quietly in sermon. Speculative conversations have pegged the theft on Yalies, still sore from the last Game Day prank. The administration believes it was a group of technically-inclined grad students who were overeager to show off their wits and expose the University’s weak spots.

March 1966: Whether it’s a trend of universities alone or human nature itself, everything old seems in constant danger of being destroyed in order to make room for the new.

As the University ramps up efforts to fund new projects such as an underpass beneath Cambridge Street, it seeks space to remove old buildings and replace them with shiny new ones that will invoke the honor and the prestige of the University. Mem Hall is the latest target.

Mem Hall—the place where students have eaten since freshman year, seen concerts at Sanders, and met up between class—is Harvard’s geographical heart. Yet rumors have been circulating that the administration finds it an ugly, archaic piece of architecture, and that they toasted to its demise when the building went up in flames in the ‘50s. It has since been restored, memorialized, and lauded by alumni. But these days, few doubt it will be saved from the impending bulldozers. Dissenting students complain that only at Harvard would a massive, functional, memorial building be torn down because professors and officials find it aesthetically displeasing.

As much as some students love Mem Hall, it’s going to be the alumni who will have to fight for its continued existence. Current students are glued to the TV, or to the papers: Some joke about the fact that they may be sent to Vietnam before they’re handed a diploma.

Whatever its fate, Mem Hall continues to be saturated with over a century of memories. Without a tangible structure to hold them, students wonder, where will its stories and people go when it’s gone?