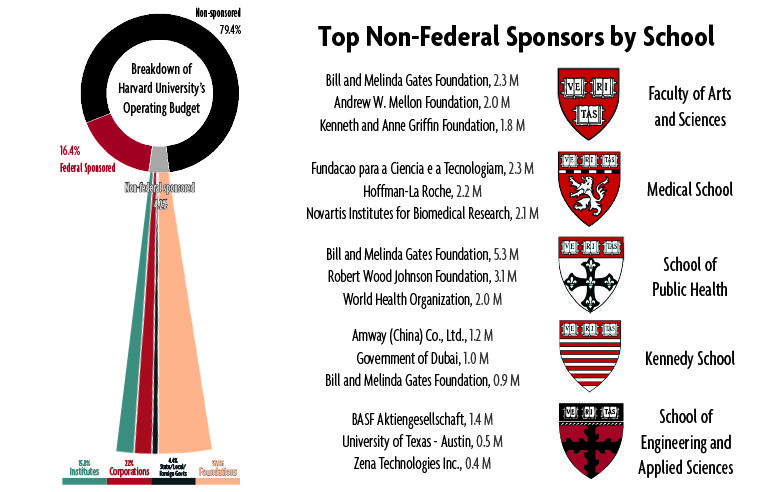 Part II of a two-part series examining how the looming cuts in federal funding could impact research at Harvard. Part I ran on Feb. 25.

Anticipating unprecedented cuts in federal funding, researchers and administrators at Harvard are faced with the challenge of making ends meet.

The looming cuts, known as sequestration, will be triggered automatically if lawmakers do not reach a budget agreement by March 1 and could cost Harvard millions of dollars in annual revenue.

Regardless of what happens on Capitol Hill this week, Harvard will have to contend with decreased revenue from federal agencies by reevaluating its reliance on different sources of income.

Marshaling the help of administrative offices, faculty members, and researchers across the University, Harvard is already exploring possible solutions.

“There are different ways in which we are planning for and responding to these changing circumstances,” said University President Drew G. Faust.

Harvard’s solutions largely fall into two categories—cost-cutting by maximizing the efficiency of existing operations and revenue-generating by finding ways to stand out in what is an increasingly competitive pool of grant applicants and diversifying sources of sponsorship.

Still, researchers worry that Harvard’s cost-cutting efforts may jeopardize their work and fear that Harvard’s revenue generating measures, particularly private sponsorship, may not be worth the attached strings.

Researchers are exploring a variety of methods aimed at cutting spending in an effort to preempt the potentially unprecedented cuts to University federal funding. Last fiscal year Harvard received over $650 million from Washington.

One of these solutions may be hiring fewer researchers in the future, according to Stem Cell and Regenerative Biology professor Jeffrey D. Macklis.

Cost-cutting may also take the form of reductions in significant equipment purchases. Many researchers have already begun to be more frugal in their expenditures.

“I find myself being more conservative with it than I might otherwise be because I don’t know down the road how hard it is going to be to get the money for big sustaining grants,” said Cox, a former Crimson design editor. “I’m being much more conservative than I would be naturally.”

Harvard is also looking to reduce costs by pooling together resources through faculty collaboration, according to University Provost Alan M. Garber ’76.

“People are watching every dollar that they spend,” Garber said. “Our faculty are already collaborative, but they also recognize that anything that gives them an edge in terms of getting research funding should be pursued more aggressively.”

But internal cost-cutting can only go so far. For what’s left, Harvard researchers and the administrators who support them are putting more emphasis on the normally onerous task of grant writing.

Meanwhile in the Faculty of Arts and Sciences, Assistant Dean for Research Administration Elizabeth A. Lennox said that the school will try to adjust its grant proposals to fit the kind of research that federal agencies are more likely to support.

“All federal funding is not going to go away tomorrow night,” Lennox said. “You learn within the National Institutes of Health and the National Science Foundation what areas they are funding, so that you can strategically go after that money.”

Cox currently has five National Science Foundation grant proposals under consideration, a high number of applications targeted at increasing his lab’s chances at winning a proposal.

“It’s already a bit of a bloodbath,” Cox said of the competition over a shrinking pool of federal funding sources.

Researchers say that in addition to the fierce competition, an emphasis on grant writing comes with risks and consequences.

“It leads you to A, waste a lot of time, and B, miss a lot of opportunities, because you can’t guess what the funding opportunities will be in a year or two’s time,” said physics and biology professor Michael M. Desai.

Junior faculty like Cox face particularly intense pressure as they try to advance in their fields. Cox said that without the adequate financial resources or established reputations necessary to take bold risks, some labs must focus on short-term gains. This austerity could make significant discoveries less likely, he said.

“The problem with science is yes, you want to have sure bets, but a lot of the biggest breakthroughs come from risky things,” Cox said.

“I don’t know down the road how hard it is going to be to the get the money for big, sustaining grants,” he added.

In addition to prioritizing grants, the University’s researchers are looking beyond traditional avenues for funding sources. Increasingly, they are turning to private corporations and other nongovernmental sources to fund their laboratories.

“Harvard has a very strong history of corporate-sponsored research and foundation-sponsored research, as well as research funded by philanthropy, so I expect that to continue and intensify,” Garber said. “We are thoroughly optimistic that there will be a great deal of interest in funding research on the part of corporations, foundations, and other groups.”

In FY 2012, Harvard received a total of $167 million in non-federal sponsorship, which equaled 20 percent of the University’s total sponsored expenditures. Fifty-eight percent of non-federal support came from foundations, while corporations provided 22 percent.

State, local, and foreign governments, as well as research institutes, other universities, and hospitals made up the rest.

But private sources of funding can bring a whole new set of issues to the table. Unlike federal agencies, which award grants with few strings attached, private corporations and charitable foundations tend to be more restrictive with their awards, outlining the specific research interests that they will support.

“In private funding you have to do what they say,” said David A. Weitz, professor of physics and applied sciences.

Administrators and researchers say that of even greater consequence is the fact that few sponsors are willing to play the role that the federal government does in basic, rather than applied, research. Companies, for example, generally look to invest in research that will deliver them a return on their investment.

“Industries engage in partnerships with universities in order to gain an advantage...not for the public good,” Garber said.

Professors added that focusing solely on the specific goals of applied research—such as clinical trials that seek to determine the effectiveness and safety of particular drugs—might prematurely cut out future advances that are founded on more basic inquiry, on which the U.S. has relied in the past to maintain its competitive edge in science and technology.

“To think of a metaphor, you’ve got foundations and companies willing to fund your second floor or your roof, but not your first floor,” Heenan said.

Cox agreed, saying that no matter how great the support from corporations and foundations, basic research is in trouble.

“Everybody always looks for private sponsorships, but it’s not like foundations are going to find new money,” he said. “I’m very dubious that you are going to see either the private foundations or the companies pick up the slack.”

—Nicholas P. Fandos and Nikita Kansra contributed to the reporting of this story.