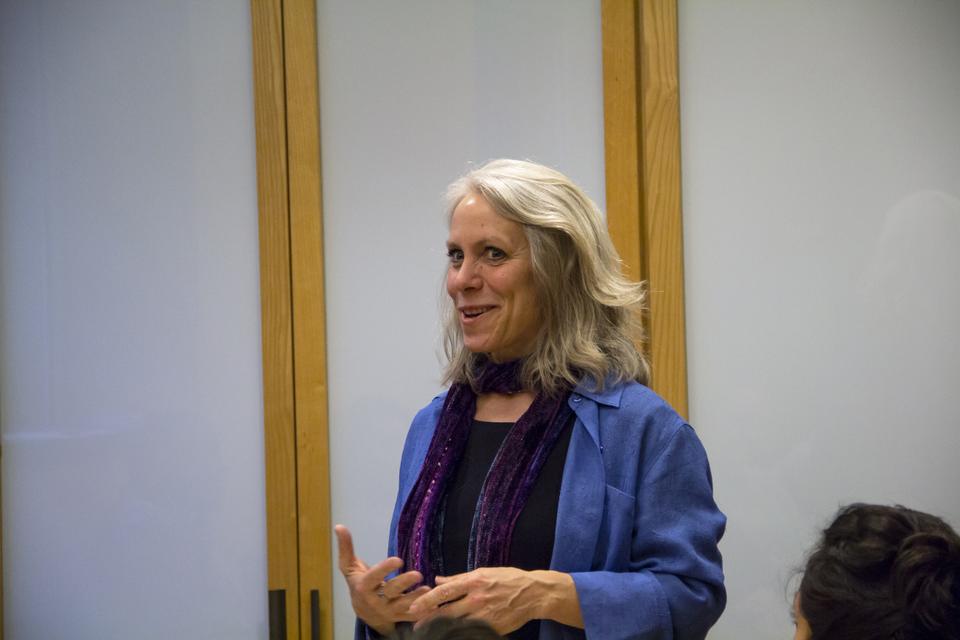 Robyn Ochs, a BGLTQ activist, is leading the Beyond Binaries talk about gender and sexuality issues at Harvard on Thursday evening with a group of students.
By Caroline T. Zhang, Contributing Writer

Rather than being “entirely heterosexual” or “entirely homosexual,” one’s identity is dynamic and fluid, according to speaker and activist Robyn T. Ochs, who spoke at an interactive session called “Beyond Binaries” on Thursday.

During the session, Ochs discussed the importance of moving away from the simple homosexual-heterosexual categories, and emphasized the need to recognize the complexity of sexual identity.

“If we don’t fit neatly into existing categories, it means the categories are problematic, not us,” Ochs said.

Sharing her own experience in coming out as bisexual, Ochs pointed out the lack of acceptance of nontraditional identities.

“I felt like to say anything was stepping off a cliff into the unknown,” Ochs said.

After identifying some shortcomings in previous research that attempted to graph sexual orientation, Ochs designed a new model that demonstrates how sexual identities are fluid and changing.

The audience members engaged in a group activity that involved a more flexible and inclusive way of visually portraying sexual identities.

Ochs first had them fill out an anonymous survey that numerically portrayed their sexual orientation and attractions.

Ochs emphasized that her model was a continuum, not just a scale, and that there was space outside the continuum for those who did not feel they fit the survey.

Heidi M. Hurst ’15, who participated in the session, said that she thought this way of portraying identity was insightful, and it was “validating that people conceive gender in so many different ways.”

“It gave me a healthy dose of appreciation for nuance when trying to portray someone’s identity,” Hurst said.

Edith C. Benavides ’14, an intern who also organized the event, said she thought the session provided a supportive environment for participants by creating the “right amount of comfort and discomfort.”

“A little bit of community was created,” Benavides said.