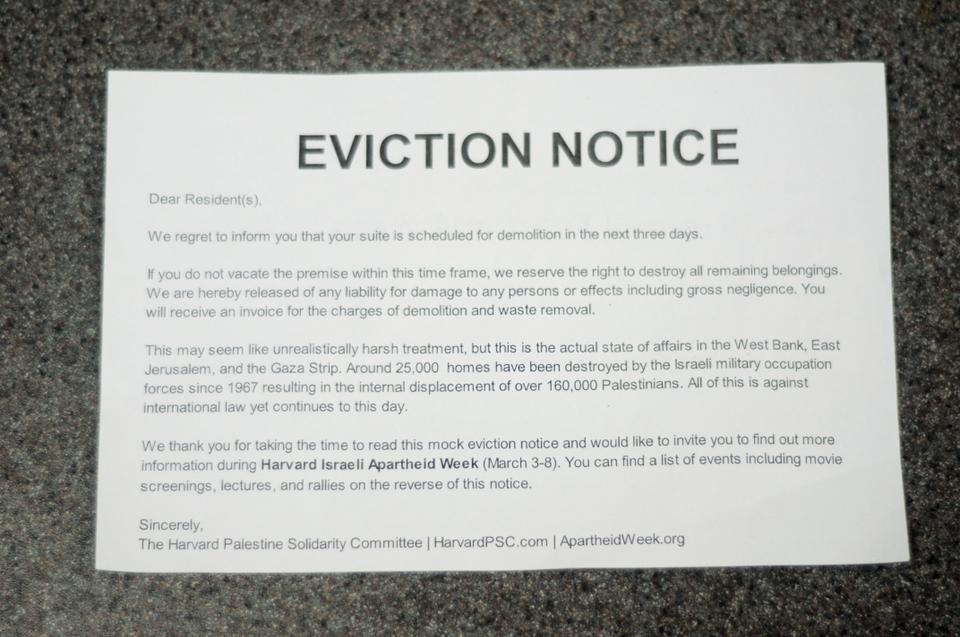 A campus debate has flared up over mock eviction notices posted on students’ doors as part of a postering campaign organized by the Harvard College Palestine Solidarity Committee.

The flyers, which were distributed Sunday in some of Harvard’s freshman and upperclassman dorms, informed students that their rooms were “scheduled for demolition in the next three days.” The notices went on to liken the mock eviction campaign to what they say is a unlawful displacement of Palestinians from their homeland at the hands of the Israeli government. The notices were part of efforts to publicize the Harvard Israeli Apartheid Week, which includes a film screening, a lecture by Noam Chomsky, and the construction of what they call an “apartheid wall” in the Science Center Plaza meant to resemble the hotly contested Israeli West Bank barrier currently being built along the West Bank by the Israeli government.

According to organizer Yacoub H. Kureh ’13, the PSC distributed mock flyers on campus at least once before, in November 2010. Though the publicity campaign generated few waves in the past, this time the mock eviction notices have been received with more resistance.

After distributing mock eviction notices throughout Quincy House, Kureh expressed dismay in a Sunday night email sent over the House list that his notices had been ripped up and thrown on the ground.

And early Monday morning, one Eliot student voiced frustration in a separate email sent out over his House list when he received a mock eviction notice on his bedroom door, rather than on the door of his suite—a placement that organizers say was unintentional. Several other students in Eliot responded to the email largely voicing opposition to the publicity campaign and the Harvard Israeli Apartheid Week.

Steven J. Tricanowicz ’13, one of the Eliot residents who responded to the House email thread, said in an interview that he believes that the PSC “did a very bad job” of promoting constructive debate.

“I feel like [Israeli Apartheid Week] goes against what Harvard stands for as a place for open academic dialogue, open thoughts, and open intellectual activity,” said Tricanowicz. “I find it kind of concerning that an event is going on in a way that promotes polarization and closed-mindedness.”

Alexander R. Shams, a student at the Graduate School of Arts and Sciences and a member of the PSC, said organizers expected to receive mixed reactions to the campaign.

“We weren’t too worried [about offending people] because the kind of events we’re hosting are the reality in Palestine,” Shams said. “If you’re going to be offended by it, be offended by the policies, not paper notices we use for advertising.”

Though the flyers provoked ire from some, other students defended the PSC’s right to publicize its events.

Kureh’s email over the Quincy House list prompted words of support from his fellow Quincy residents.

Kureh said he was “pleased with the response.”

“We feel bad responding to something that is so outside the spectrum of what we are willing to engage in,” said Kantor, who is a Crimson Arts editor and a former president of Harvard Hillel. “The issue is that it no longer becomes a question of dialogue—it simply becomes rhetoric and demonizes an entire nation and people.”

But Kureh said that amid the charged politics surrounding the issues, his group is focused on remedying what it perceives to be forced segregation of Palestinians.

“This is a humanitarian crisis,” Kureh said. “We’re going to stay with that.”

An earlier version of this article incorrectly stated that the Harvard Israeli Apartheid Week was in its ninth annual week. In fact, this year marks the ninth annual international Israeli Apartheid Week. The article also incorrectly stated that Sara Kantor ’14 is the president of Harvard Hillel; in fact, she is a former president of the organization.