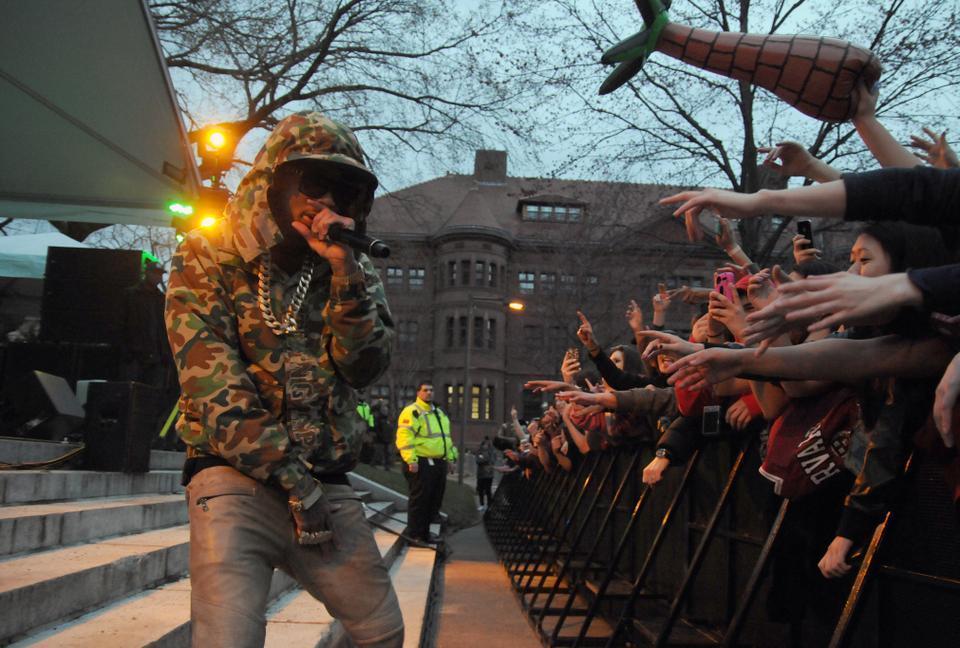 Students clamor for hip-hop artist Tyga at this year’s annual Yardfest held in Tercentenary Theatre. Hosted by the Office of Student Life, the concert brought with it sizable controversy about the artists’ lyrics.
By Laya Anasu and Madeline R. Conway, Crimson Staff Writers

Twice during his performance in Tercentenary Theater Saturday evening, rapper Tyga alluded to the controversy surrounding his appearance at Yardfest.

“Despite all the haters, we’re here,” he yelled into his microphone just minutes into his performance, saying he appreciated everyone who came out for the concert.

Later, not long before leaving the stage at the end of the night, he shouted, “I just want to say: Fuck the haters.”

Tyga, whose selection as the Yardfest headliner generated student protest, a reaction from the Office of Student Life, and even an alternate concert, appeared otherwise unfazed throughout his nearly hour-long performance. Wearing a hoodie, baseball cap, and sunglasses, Tyga rapped before a crowd that attendees characterized as larger than last year’s concert but still not well-attended.

At one point, Tyga performed “Bitch Betta Have My Money”—a song with lyrics that a student-launched Change.org petition criticized as “explicitly and violently misogynistic.”

Following the student outcry and a request from OSL administrators to reconsider the selection of Tyga, the College Events Board and the Harvard College Concert Commission, which organized the annual spring concert, announced last Monday that they would delay the start time of Tyga’s performance to allow unhappy students to leave the concert after eating dinner and watching student openers Puttanesca and The Cantab Cowboys.

But despite the controversy and chilly weather, the crowd did not thin noticeably after Tyga came on stage. Several students who attended praised the performance.

“I am enjoying it,” said Hillary L. Crowe ’15 as she stood listening to the music, lounging against a tree in the Yard. “I think it’s a fun way to hang out with friends.”

Still, some students left the concert before Tyga’s performance began. Anahvia T. Mewborn ’16 walked out of the performance before it ended, saying she was leaving in protest of Tyga.

Before Tyga took the stage at about 7:15 p.m., the two student groups performed as students ate a barbecue-style dinner in the Yard.

At 5:15 p.m., Puttanesca, an 11-piece ensemble featuring a harp and flute among other instruments, opened Yardfest with a cover of Coldplay’s “Paradise.”

Kate P. Donahue ’16, who had several friends in the group, said she appreciated the variety of instruments that Puttanesca brought to the concert.

“It feels like such a Harvard band to me,” Donahue said in the crowd as Nina L. Hooper ’16 sang Puttanesca’s cover of Miley Cyrus’s hit “Party in the U.S.A.”

Next, four-student band The Cantab Cowboys came on stage to perform new and old hits. Before hosting an alternative concert planned for later that evening in the Eliot House courtyard, the Eliot House Masters Gail A. O’Keefe and Douglas A. Melton made an appearance for The Cantab Cowboys’ performance. O’Keefe called the band “amazing,” noting that band member Axel K. Snow ’15 is an Eliot resident.

For many, the tumultuous lead-up to the concert culminated in a relatively smooth Yardfest.

“I think overall people who were here had a good time,” said Rebecca L. Grzyb ’16.

An earlier version of this article misspelled the last name of Nina L. Hooper ’16.