Freshmen Go to Hell and Back 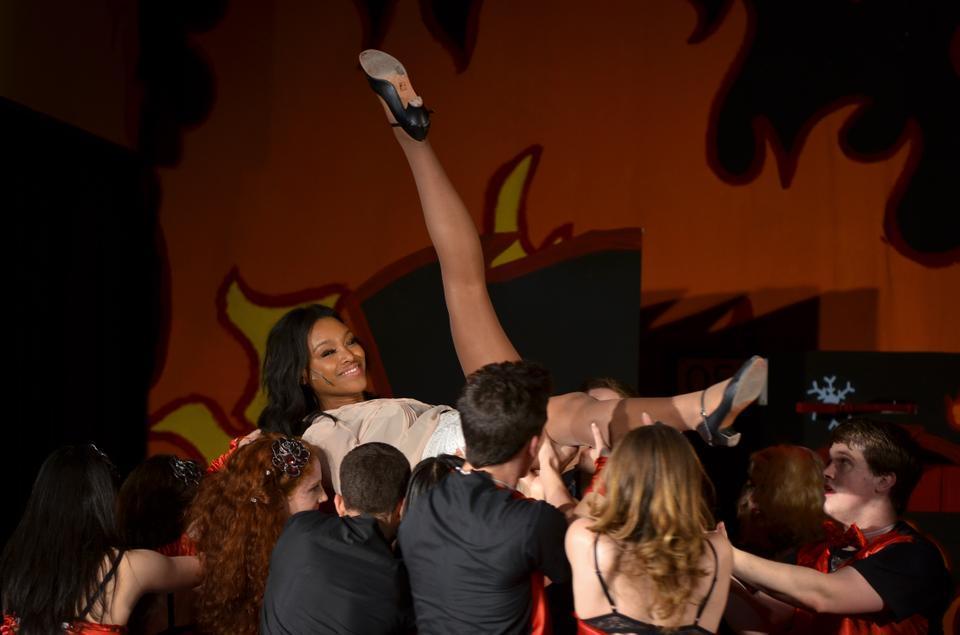 Members of the Class of 2016 perform in the freshman musical, "What The Hell" in Agassiz Theatre.
By Ola Topczewska, Crimson Staff Writer

Every year around the time that trees burst into bloom and 17-year-olds across the country weigh admissions offers from Harvard and a school in Connecticut, an ensemble of first-years put on a one-of-a-kind show: the Freshman Musical. Colorful, farcical, and often raunchy, the musical—affectionately dubbed the “Froshical”— has become a Harvard tradition. Founded in 1996 by the Class of 1999 with the show “Shakespeare in the Yard,” the Freshman Musical is different from other productions on campus in that is that it is entirely written, directed, produced, composed, performed, designed, choreographed, orchestrated, and staged by Harvard freshmen. This year’s Froshical, “What the Hell?!” played until Sunday at the Agassiz Theatre. The musical was especially humorous and well put-together, with near professional performances and sophisticated references.

“What the Hell?!” took the tradition to new depths with a show that was witty, flashy, and an enjoyable romp through the fiery but not overly gruesome world of Hades. The journey into the inferno kicks off not when a character kicks the bucket, but when he falls in love—or lust—with glamorous college heartthrob Kylie O’Kelly (Kyra T. Weeks ’16). Lovestruck Zak Smith (AJ Unitas Jr. ’16) makes the turbulent journey to Hell with his bro-mantic partner Rutherford Crutch (Eli K. Rivas ’16) after Kylie tells him she will only date him “when hell freezes over.” Hell is located—where else?—off the New Jersey turnpike, and, determined to win Kylie’s affections at all costs, Zak and Rutherford try to go to hell and back.

Among the high points of the show was the deadpan, sardonic performance of Rivas in the role of a gay best friend who declares that he is “not ‘sassy,’ ‘angry.’ There’s a difference.” Also noteworthy were the jovial, enthusiastic performance of Randa R. Melhem ’16 as evil demon lord the Greedy Pig, and the vocal abilities of Madison M. Dildine ’16 in the role of Hell’s tour guide, Charon, whose peppy performance was part Olivia Newton-John, part Elle Woods.

Some of the show’s humor comes from its self-awareness that it is, in fact, a musical, as seen in the jazzy number “Montage Song,” in which characters zipped swiftly through the nine circles of Hell ahead of an acknowledged imminent intermission. The journey was punctuated by Kylie’s occasional literary criticism—made possible by the fact that this icy vixen is an English major.

In a show with so many moving parts, the chorus can sometimes be neglected, but in “What the Hell?!” its role is well timed, well rehearsed, and funny. Choreography by Olivia M. Munk ’16, a Crimson Magazine editor and the skillful performance of the pit orchestra, in particular the saxophone and cello parts, made the cohesion of the show possible. Writer Mike C. Ross ’16 has crafted a smart and witty play, filled with allusions to Virgil, references to Greek heroes and discussion of literary devices. Despite these arcane references, the show is still very funny.

For a musical about Hell, “What the Hell?!” is strikingly uplifting. It’s a world where Satan (Brad A. Latilla-Campbell ’16) is a socially isolated failure, and where the most gruesome scene is an attack with hockey sticks. Despite using political messages as a source of humor—much was made of Hell’s ill-advised decision to “go corporate,” and the Greedy Pig demon lord kept workers at Walmart non-unionized—the show did not moralize to the audience. It ended on a happy note with the message that true friendship conquers all and that, as Unitas cheerfully belts out, one ought not “think with [one’s] penis.”