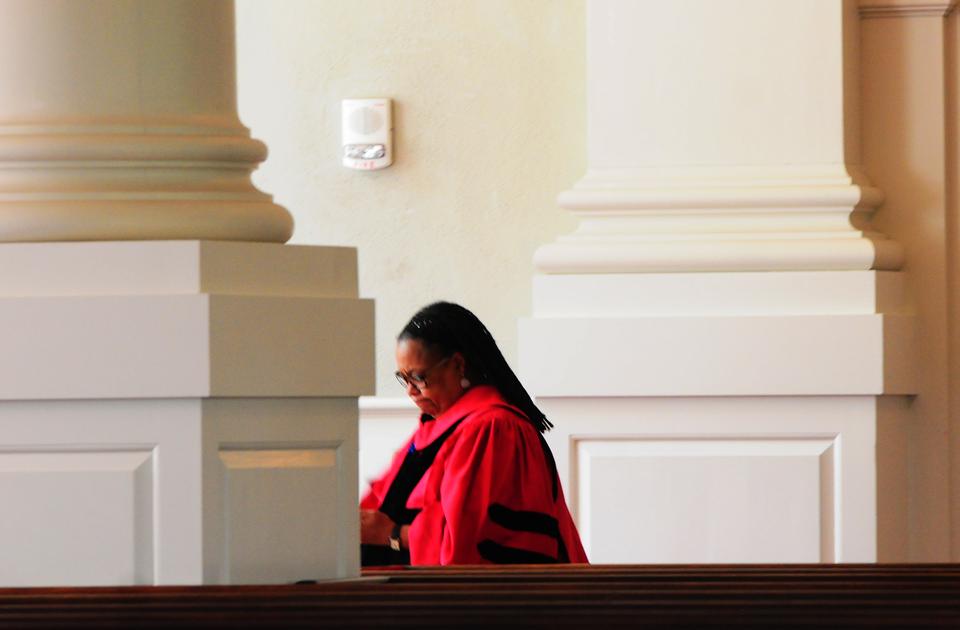 Evelynn M. Hammonds walks in Memorial Church prior to the Baccalaureate Service for the Class of 2013 on Tuesday afternoon. Dean of the Faculty of Arts and Sciences Michael D. Smith had sent out an email to the Harvard community Tuesday morning announcing that Hammonds will step down as Dean of the College on July 1.
By Nicholas P. Fandos and Samuel Y. Weinstock, Crimson Staff Writers

Evelynn M. Hammonds will step down as the Dean of the College on July 1, Dean of the Faculty of Arts and Sciences Michael D. Smith announced in an email to the Harvard community Tuesday, ending nearly two months of speculation about the embattled dean’s future.

The resignation ends a semester rife with controversy for Hammonds, who announced to faculty on April 2 that she had broken their email privacy policy in authorizing secret searches of a resident dean’s FAS email account. Those searches were a part of a broader probe to plug a leak of Administrative Board information connected to the Government 1310 cheating scandal that marred the final year of her tenure.

“Being dean of Harvard College has been an immensely rewarding experience for me, but I miss engaging deeply with my scholarship and teaching,” Hammonds said in a story posted Tuesday morning by the Harvard Gazette. Smith wrote in his email that Hammonds will take a sabbatical and return to teaching thereafter.

The Gazette’s story did not address the email search scandal that has made headlines since March. But on Tuesday afternoon, Hammonds made a statement through an outside strategic communications company saying that the scandal “was difficult but it was not a motivating factor in my decision to step down.”

In that statement, Hammonds also addressed the suggestion that she had been asked to resign.

“I was never asked to step down. I have been in discussions to return to academia and my research for some time,” she wrote.

The Crimson first reported that Hammonds had been in negotiations to step down as dean on May 17, at which time Hammonds did not confirm the news. “I have not been asked to resign as dean, nor have I offered. I am dean of Harvard College and I think speculation to the contrary is unproductive,” she wrote in an emailed statement to The Crimson.

In Tuesday’s email announcing Hammonds’s resignation, which was sent to students, parents, and faculty members, Smith wrote that he will begin working on finding an interim dean soon and will appoint a search committee of students, faculty, and staff to find a new dean in the fall.

The announcement comes as thousands of alumni and visitors are arriving on campus for Thursday’s Commencement exercises. Hammonds attended the Baccalaureate Service for the College Class of 2013 on Tuesday afternoon, though as customary she did not deliver remarks. She is still expected to address graduating seniors at Wednesday’s Class Day ceremony and to attend Thursday’s Commencement exercises.

Ali S. Asani ’77, chair of the Near Eastern Languages and Civilizations Department, said that Hammonds was a good leader and responsive to the needs of students, but that the email searches controversy eroded trust that was crucial for her ability to serve effectively.

“I just felt that this incident of the email searches, I think, went overboard, where you’re violating the privacy of faculty,” Asani said when asked about the expected resignation earlier this month. “I think because of that loss of trust, maybe it is really in the best interest [that she step down].”

Currier House Undergraduate Council representative Sietse K. Goffard ’15, who in April sponsored UC legislation expressing “tremendous concern” over the searches, said that the resignation is an “important first step” in rebuilding trust between students and administrators.

He said that given the strife that plagued Hammonds’s year, he is glad to see that “there has been some leadership change and closure to signal to faculty, students, and alumni that someone will ultimately be held accountable.”

Looking beyond controversy surrounding the email searches and the Government 1310 cheating case, other professors praised Hammonds’s leadership at the helm of the College.

Eck added that, along with her co-Master of Lowell House Dorothy A. Austin, she was grateful to have had the chance to collaborate with Hammonds.

“It has been a real privilege to work with her for five years,” Eck said. “House Masters like Dorothy and I see her work relentlessly behind the scenes for programs and facilities that benefit our students.”

Upon her return from sabbatical, Hammonds will lead a new program at the W.E.B. Du Bois Institute for African and African American Research on the intersection of race and gender with science and medicine.

“I am looking forward to redesigning my classes in light of new technologies and modes of teaching,“ Hammonds said in the Gazette. “I’m eager to return to my teaching and research on race, genomics, and gender in science and medicine.”

Henry Louis Gates, Jr., a professor in the Department of African and African American Studies and the director of the DuBois Institute, said Tuesday that he sees Hammonds’s decision to step down and return to academics “in nothing but the most positive terms.” Gates, who learned of Hammonds’s decision to step down in a personal email from her Tuesday morning, would not comment on the specific motivation behind the decision.

“From my point of view, it’s wonderful,” Gates said. “Evelynn and I have for several years directed a working group at the Du Bois Institute about genealogy and genetics, and I have wanted her to pursue this area of scholarship rather than remain in administration.”

Hammonds was selected to be the first woman and first African-American to serve as Dean of Harvard College in 2008. Her tenure saw the full implementation of the General Education program, the launch of Wintersession, and the beginning of House renewal construction. Though she taught few classes during her time as dean, Hammonds remains a member of the History of Science and the African and African American Studies departments.