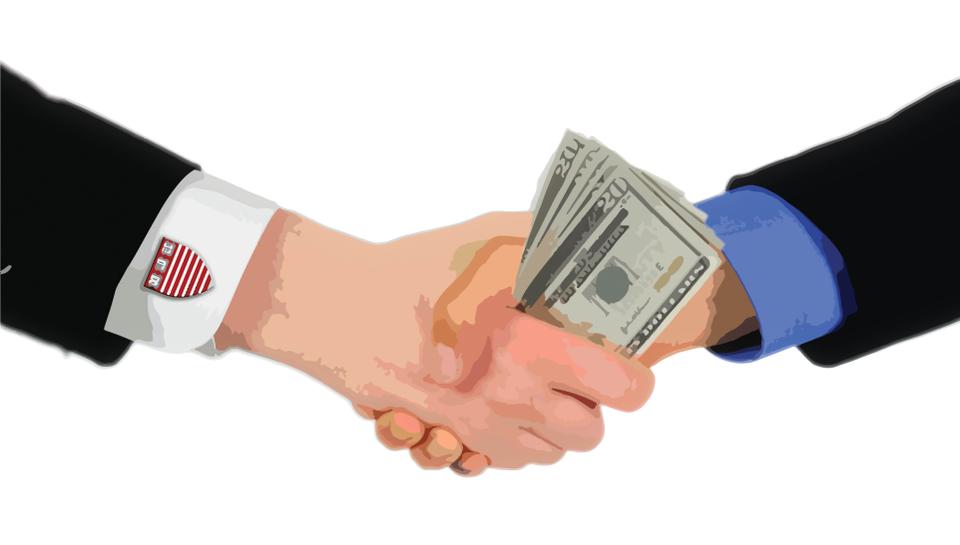 “There’s a Harvard man on the wrong side of every question,” runs the famous quotation by former University President A. Lawrence Lowell, Class of 1877.

In the fall of 1987, Dean of the Kennedy School Graham T. Allison ’62 found himself on the wrong side of a scandal resulting in increased oversight of fundraising in Harvard’s schools.

Earlier in the year, the Kennedy School of Government had announced its intention to implement a number of public service initiatives, including a loan forgiveness program for its students, 15 to 20 of whom were eligible. At the time, however, the Kennedy School had not secured any funding to support it.

That November, after The Harvard Crimson reported that Allison had solicited a $500,000 donation for this purpose in exchange for offering the donors official positions within the University, the resulting media frenzy attracted harsh criticism that some Kennedy School affiliates thought was unfair.

But even as the fundraising scandal fades into the past, important questions about the ethics of fundraising within Harvard still linger.

THE COUPLE FROM TEXAS

They had held positions at schools nearby and abroad; Charles Dickinson had served as a curatorial associate of manuscript collections at the Andover-Harvard Theological Library and was a lecturer of psychiatry at Harvard Medical School in 1987, where he enjoyed full access to the school’s library facilities. The couple, however, was better known for their inheritance of a family oil business and their many donations to educational institutions.

According to Bailey F. Mason ’51, who was an administrator in the Dean’s office at the Kennedy School at the time of the scandal, the Dickinsons were “generous donors” who had asked a lawyer to draft an official agreement ensuring that after a first-time dona- tion to the Kennedy School, they would hold access to further research facilities. The Dickinsons hoped to gain access to Widener Library—a right not unlike the privilege Dickinson already held at the Medical School—in addition to membership in the Faculty Club, Mason said.

In early November of 1987, the memo outlining this exchange was leaked to The Crimson, thrusting the Kennedy School into the national spotlight.

A STORY THAT WASN’T

Soon after the original agreement papers were finalized in the Dean’s office, The Crimson published a story alleging that Allison intended to “bestow University Officer status on an oil-rich Texas couple in return for a $500,000 gift,” in the words of a Crimson editorial written soon after the scandal broke.

Before the University had the chance to respond to the allegations, several news sources picked up The Crimson’s story, echoing sentiments that Allison’s actions were improper. “The Kennedy School’s explosive growth has entailed some insensitivity to ethical constraints,” read a New York Times article. A Boston Globe editorial was even more severe: “The gang running Harvard would put a pack of Chicago aldermen to shame. When it comes to extortion, these people are definitely major leaguers,” it contended.

The harsh coverage of the incident surprised many within the school, who did not see the exchange as a basis for such extreme conclusions. Mason said he thought that the initial Crimson coverage had blown the agreement out of proportion.

“There was no research, no confirmation, nothing,” Mason said. “It was bad journalism, plain and simple."

Richard E. Cavanagh, Executive Dean of the Kennedy School at the time, remembered many feeling the same way as Mason. "People thought that it was unfair for the story to be spun in this way. It took on a life of its own," he said.

Those who saw the Kennedy School as having been unfairly maligned remembered the original exchange itself as seemingly innocuous. “It had much more to do with making it possible for someone to access Widener Library, not issuing University positions,” said emeritus professor Marvin Kalb.

But as the story gained steam outside of the University, the faculty of the Kennedy School became increasingly defensive.

Despire their disagreement with the scandal's coverage, those within the Kennedy School felt the pressure exerted by the media scrutiny. "My mom asked why I would work at a place like that," Cavanagh remembered.

In his only public statement, Allison did not defend the validity of his method of soliciting donations. "It is clear that the handling of this case does not meet my own standards or the standards of the University," Allison said at the time.

Bok took this line of reasoning one step further in his speech. "The issue is clear cut," he said. "No one should receive such a position at this University by virtue of a donation to Harvard, but only because of superior qualifications to perform the responsibilities of the post."

Bok also announced that the University would launch a full-scale review of its schools' fundraising practices and stated that the investigation into the Kennedy School deal would continue.

But some Kennedy School employees felt that these statements only reaffirmed the mistaken perspective that had cast the encounter in a negative light.

“Bok had to take the high road, saying that the University never gave donors privileges,” Mason said. “That wasn’t true at all, but then again, Allison didn’t do anything wrong.”

After an extensive investigation of University policy regarding large gifts, the Kennedy School adminis-tration created the Gifts Proposal Advisory Committee, which oversees the process by which restricted financial gifts are received and approved. Today, GPAC assesses these proposals from legal and ethical frameworks, while the school’s Faculty Committee on Projects and Proposals reviews proposals from an academic lens.

Though the scandal surrounding the story quickly died away after the initial media explosion, those under its shadow continue to debate practical and ethical concerns over the place of fundraising on campus.

Some Kennedy School affiliates said that while the means by which the University acquires donations are not always ideal, they are still necessary. “When you try to get money to help a very important part of the University, you negotiate—you’re involved in the exchange of ideas,” Kalb said.

“That’s what people don’t understand. Fundraising is an important part of all institutes of higher learning, state or private,” Kalb added. “There’s always a give and take—that’s the nature of the beast.”