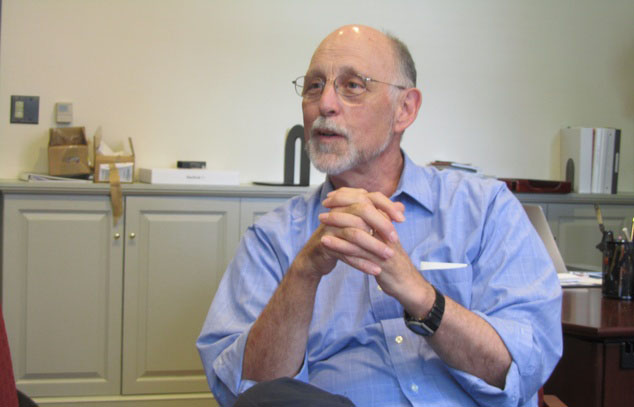 Three days into Donald H. Pfister’s tenure as interim Dean of the College, the walls are largely bare and the shelves not yet full in his new University Hall office. Only on his mantle is clear evidence that a systematic botanist now inhabits the administrative heart of Harvard’s flagship school: an enlarged print of a first-class stamp honoring Asa Gray, the botanist for whom Pfister’s professorship is named.

Pfister, who will lead the College during the search for a permanent dean, acknowledges that he has little time to make the office his own. “At the most, I’m looking at a year, probably,” he says in an interview in his office Friday afternoon.

Yet despite this transience, Pfister hopes to leave his mark on the College in the time he has.

“I want to be the dean that was able to do this community building and be able to bring the College life and academic life together in some way,” Pfister said. “That’s a big assignment for one year, but part of it is reaching out, being available, having the ability to work with a mixed constituency, in a way.”

But after a tumultuous year that some say has fractured the community he seeks to build, Pfister may face an uphill battle.

Pfister assumes the deanship, most recently held by Evelynn M. Hammonds, after a year marked by controversy—a massive cheating scandal and revelations of secret email searches that some believe led to Hammonds’s departure. Though well-acquainted with the workings of the College, Pfister faces the challenge of leading a student body that has grown skeptical of administrators without knowing how long he may have to effect change.

Several Undergraduate Council members predicted that the issues that dominated campus discussion this past year will again be the most pressing questions facing the College this fall. They and Pfister’s colleagues say that the new interim dean’s long resume has prepared him to address these issues.

Pfister, most recently the dean of Harvard Summer School and curator of the Farlow Reference Library and Herbarium, has taught at Harvard for nearly four decades. In that time, he has held multiple appointments in the College administration, serving as Kirkland House Master for 18 years and chairing a committee that reviewed the Administrative Board.

“He’s had his hand in virtually every aspect of the College that I can think of,” said Stephen A. Mitchell, a professor of Scandinavian and folklore who sat on the now-dissolved Committee to Review the Administrative Board with Pfister and served as Eliot House Master while Pfister was in Kirkland. “And so in that sense, he has a lot of things going for him.... He has seen things work.”

“He doesn’t have any ground to make up,” added former UC President Matthew L. Sundquist '09, the one student who served on the Ad Board review committee with Pfister. “He comes in on day 1 knowing how the College works in really every respect.”

In particular, students point to Pfister’s time heading the Ad Board review committee as experience that will serve him well in helping to guide the College’s ongoing conversation about academic integrity.

In 2009, Pfister’s committee issued a report that, among other proposed reforms, recommended further discussion about the creation of a second disciplinary board populated by students as well as faculty. Although such a board was not established following the report’s release, a recent honor code proposal has reignited the discussion.

The proposal, which Dean of Undergraduate Education Jay M. Harris presented to members of the faculty at their monthly meeting in April, outlines a five-point honor code that, among other points, would establish a Student/Faculty Judicial Board made up of both students and faculty to hear academic dishonesty cases. The Committee on Academic Integrity plans to solicit feedback on the proposal from students in the fall, according to Terah E. Lyons ’14, who serves on the committee and also helped draft the proposed honor code. In his capacity as Dean of the College, Pfister will chair the Ad Board as these discussions proceed.

Colleagues also nearly uniformly praise Pfister for his ability to connect with students, citing his almost two decades as a House Master.

“I don’t think you could get better training than somebody who’s been in the trenches in a House,” Dean of Freshmen Thomas A. Dingman ’67 said.

A CALL FOR TRUST

But even with this experience, students caution that in his new role, Pfister will be hindered if he cannot reverse undergraduates’ skepticism and frustration with College administrators, which they say partly stems from this past spring’s email searches scandal.

In March, news broke that administrators had secretly searched resident deans’ email accounts to trace the source of a leak of a confidential Ad Board document pertaining to the Government 1310 cheating investigation. Several weeks later, Hammonds admitted to faculty at their monthly meeting that she had secretly authorized a second set of searches of a single resident dean’s faculty and administrative accounts without the necessary permission, thereby violating Faculty of Arts and Sciences email privacy policy.

When asked about his priorities for the upcoming year, Pfister said trust-building within the Harvard community is important, though he was not directly addressing the email searches.

For UC Secretary Meghamsh Kanuparthy ’16, “the first order of business for the dean” should be to regain students’ trust in the wake of the searches.

Although the searches did not target student accounts, undergraduates questioned their own email privacy following the revelations. And although an Office of Student Life official later said the rumors were untrue, students speculated in March that administrators had been searching email listservs the night of River Run, a prohibited tradition in which freshmen consume alcohol at the upperclassman River Houses the night before Housing Day.

“There are groups within the student body who are somewhat distrustful of the administration,” Leverett House UC representative Aaron E. Watanabe ’14 said, adding that he was not sure of the connection between this sentiment and the email searches. “Probably, if you polled everyone...you’d find that people were [leaning] a little bit more towards the distrust rather than trust side.”

Kanuparthy said students see the Ad Board, for example, as a “mystery.” And Currier UC representative Sietse K. Goffard ’15, who introduced UC legislation expressing “tremendous concern” over the email searches, said that this past year there was some level of distrust and skepticism toward the College administration coupled with doubts about its transparency.

“I think students want to see more communication, not only through something as impersonal as an email, but face-to-face communication,” said Brett M. Biebelberg ’16, who represented Crimson Yard in the UC this past year. “I think people want to know who their dean is, and I don’t know if that has been the case in the past.”

Hammonds, who officially left the deanship at the start of this month after her departure was announced in May, has been criticized previously for what some described as too-infrequent communication with undergraduates.

For his part, Pfister said that he will make an effort to reach out to students as dean, calling it a “priority.” To that end, he plans to eat in House dining halls, and although he said he has not yet worked out his schedule, he said he will aim to do so “certainly more than once a month.”

Beyond student disillusionment with administrators, however, Pfister faces a challenge that stems from the transient nature of his new position, several students and colleagues say.

In the past, faculty members have raised concerns over the impact of what former Graduate School of Arts and Sciences Dean Theda R. Skocpol has termed “interim-ness” on Harvard’s ability to make progress on ongoing issues. In 2008, when David R. Pilbeam was serving as interim dean of the College, former UC President Ryan A. Petersen ’08 claimed that Pilbeam and other interim administrators unfamiliar with their roles had been “cavalier” in their decision-making.

Now, as Pfister begins his tenure, students question the impact an interim dean can have in a tenure that will be measured in months.

“You can’t underemphasize the fact that this is still an interim position,” Kanuparthy said, adding that he does not expect “grand shifts” in College policy during Pfister’s relatively short tenure.

Still, Elaine Scarry, an English professor who served on the Ad Board review committee with Pfister, said she believes Pfister’s extensive experience at the College will render his short tenure “less of an impediment [to progress] than it would normally be.”

For his part, Pfister said he believes that within the year he can take steps to foster community at the College for both students and faculty.

“I do want to make it very clear that this office needs to be out, needs to be visible, that the dean can do quite a lot by being a presence in the community,” Pfister said.