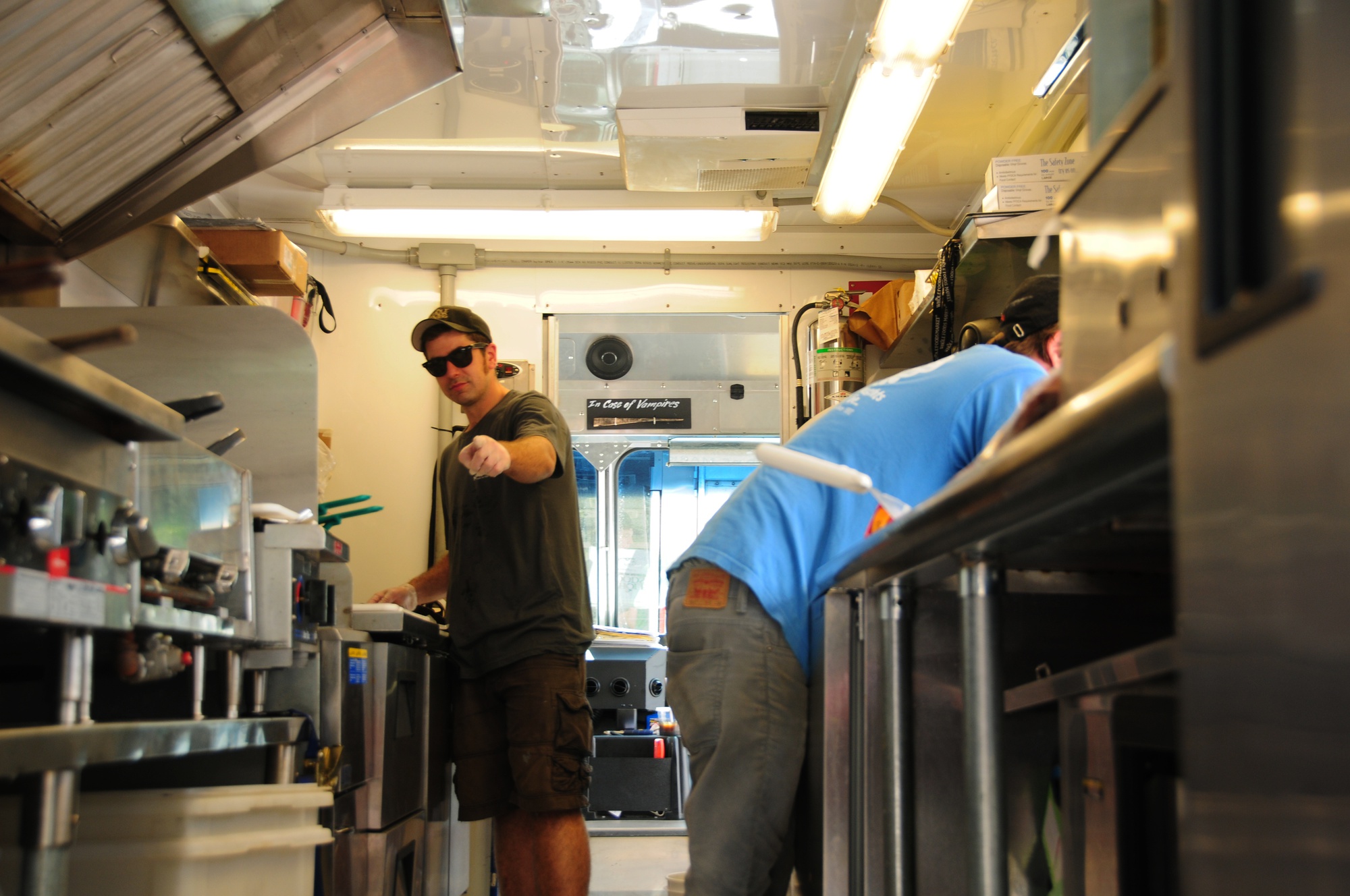 Patrick, one of three workers in the Whole Foods 'Street Side Chefs' food truck, said that the truck will be open for the entirety of the fall semester. Look for them in the Science Center plaza!
By Nikki D. Erlick, Crimson Staff Writer

Beginning next week, members of the Harvard community and the University’s neighbors may not need to venture into Harvard’s laboratories to sample liquid nitrogen ice cream. Instead, they can visit Churn, an ice cream kiosk that uses liquid nitrogen to create any flavor in just seconds and just one of multiple new culinary offerings and artistic displays on the Science Center Plaza implemented by the Harvard Common Spaces Program this fall.

“When the renovated space opened in April, we had our core group of food trucks, and now that’s started to grow because the [food truck] community has heard about how popular this location is,” said Lisa Hogarty, Vice President for Campus Services.

The plaza recently welcomed Benny’s Crepe Café and Bon Me to the existing line-up of food trucks. Hogarty added that a Middle Eastern food truck might debut later this fall and that she anticipates trucks will continue to serve on the plaza throughout the semester.

Bon Me Truck, founded in 2010 by Patrick M. Lynch ’01 and Ali Fong, serves Vietnamese cuisine every Wednesday and Friday. Teagan M. Lehrmann ’13, the Catering Director and Business Development Manager for Bon Me Foods, said she “really pushed to be on the new Science Center Plaza” after witnessing the impact of the new campus initiatives during her time as an undergraduate. While Lehrmann said Harvard is not Bon Me’s most lucrative location, she estimated that the Science Center truck serves about 300 customers per day.

Churn finished securing its licensing Wednesday, and will likely open next week, according to Hogarty. She added that the ice cream kiosk has partnered with Harvard Student Agencies to train student employees.

A new arts market on the plaza also launched last Friday and will feature local artists and crafters, as well as a student concert series. Like the Tuesday farmers’ market, the arts market is poised to be a weekly occurrence and should help the Common Spaces Initiative meet its goal of increasing the number of student performances on the plaza, according to Hogarty.

The Common Spaces Program—a concept proposed by University President Drew G. Faust soon after she first took office—initially focused on finding spaces on the Harvard campus with the potential to become exciting destinations and bring the community together.

“The plaza was really first and foremost in our minds because it is the crossroads where everybody traverses the campus,” Hogarty said.

Hogarty also said that the University used multiple focus groups to discern what types of activities people wanted to see on the plaza. An overwhelming number of participants requested interesting food options, which prompted the Common Spaces Program to pursue food trucks.

The new offerings have been complemented by increased—and creative—seating options. The colorful, puzzle-piece chairs surrounding Annenberg were inspired by “colorful tetris pieces in parks in France,” Hogarty said.

The plaza recently entertained more than 3,000 guests after Faust gave her opening-of-the-year welcome address [LINK 1] in Sanders Theatre on Tuesday afternoon, and it will continue to host events throughout the year.

“The plaza is really a first for Harvard,” said Hogarty. “Rather than just going to a basketball game or a football game, this is a space where all the schools, all the different student groups, and the Cambridge community can come together.”