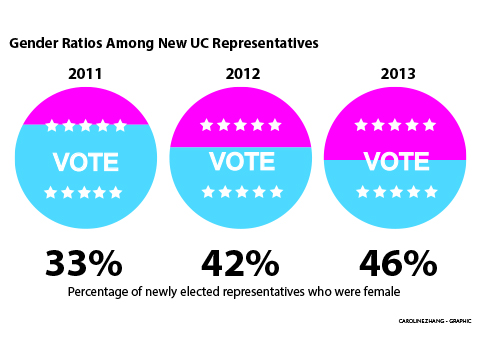 The percentage of women elected to the Undergraduate Council has risen in the past two years.
By Steven S. Lee, Crimson Staff Writer

In this year’s Undergraduate Council general election, it would have taken a total of just three votes to be elected as an Eliot House representative, and only four to earn a seat in Cabot House. But with an unprecedented tie in the UC’s voting history, four candidates who fell short of these thresholds remain in electoral limbo.

The general election results, announced Sunday, left 44 of 46 seats filled, according to Sahil A. Khatod ’14, head of the UC Election Commission.

Tyler R. Kugler ’15 and Ved V. Topkar ’16 of Eliot House tied with two votes each, while Connor B. Hinebaugh ’15 and Serguei Balanovich ’16 of Cabot House each received three votes, according to Kirkland representative and UC Secretary Meghamsh Kanuparthy ’16. All four were write-in candidates.

According to Kanuparthy, neither the body’s constitution nor its bylaws nor the 2013 election rules released by the Commission state a procedure for what should be done in the case of a tie, leaving the UC and the Election Commission without any procedural guidance.

On Monday, the UC sent an email to the student body saying that the ties would be resolved via a runoff vote during Sunday’s UC general meeting.

The 2013 general election also marked a high for gender parity on the Council—an issue that the historically male body has worked to address in recent years.

In total following the election, women now hold 24 of 51, or roughly 47 percent, of seats on the UC, including the positions of President and Vice President.

In total, 86 students declared their candidacy last week for the 46 spots open on the Council this year. While most races were relatively uncontested, freshmen made up more than half of this year’s candidates.

Juan P. Castano ’17, who ran against 13 other freshmen to win one of three representative spots for Elm Yard, described the competitive nature of his election as “daunting.”

“I guess it just motivated me more to try to work harder in terms of my campaign and it pushed me to go door to door,” Castano said.

UC Vice President Jennifer Q. Zhu ’14 said that while it takes time for any new Council to “get used to the way Harvard works as an institution,” she expects big things from the coming year.

“Tara and I are just ready to push for important conversations from last semester, we’ve set some of our priorities and we’re ready to make progress,” Zhu said. “We’re excited by all the new blood and also by all the UC reps who’ve returned.”

The full election results are as follows:

An earlier version of this article incorrectly stated that Meghamsh Kanuparthy ’16 is a former UC Secretary. In fact, he still holds the position.