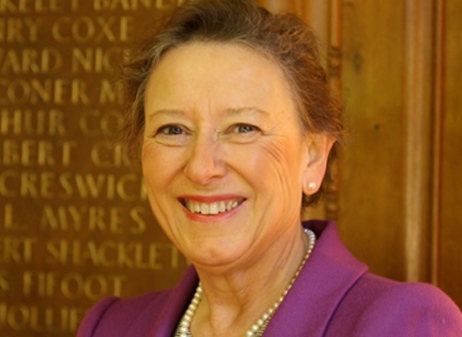 In her new role as FAS Librarian, Sarah E. Thomas will lead library systems that fall under FAS, such as the Harvard College Library.
By Samuel Y. Weinstock, Crimson Staff Writer

Sarah E. Thomas, the recently appointed vice president of the centralized Harvard Library, will also lead the Faculty of Arts and Sciences library systems as the FAS Librarian, FAS Dean Michael D. Smith announced in a letter to the faculty on Wednesday.

Thomas will maintain her position administering the Harvard Library, which means that she will hold a position in the central administration answering to the Provost, as well as her new one in FAS reporting to Smith.

“Sarah’s two posts will be separate and independent,” Smith wrote in his letter, adding, “I believe that we will benefit significantly from Sarah’s simultaneous leadership of both organizations.”

Thomas was appointed as the Harvard Library Vice President in May, nearly 10 months after the completion of a reorganization which consolidated many of the libraries’ services into one central organization. In that position, Thomas leads the shared services segment of the unified Harvard Library, whose goal is to connect Harvard’s 73 individual libraries, including the library systems of FAS and Harvard’s other schools.

“Sarah’s goals are to create library services that have a foundation of strong print and digital collections, to develop expert staff who focus on anticipating and meeting the needs of faculty and students, and create a welcoming and productive environment for library use,” Smith wrote in his letter. “She will be consulting broadly with the faculty as she develops plans to accomplish these goals.”

Before coming to Harvard, Thomas oversaw the Bodleian Libraries at Oxford University and served on the Harvard University Library’s Visiting Overseers’ Committee. Her former posts also include University Librarian at Cornell, a position she held for 11 years, and President of the Association of Research Libraries.

Speaking to the Harvard Gazette, University Librarian Robert C. Darnton ’60 said that Thomas’s extensive experience with Harvard’s libraries and others made her the “best conceivable choice” for the position. Darnton also said that Thomas would play a key role in fundraising for the libraries.

“She will be instrumental in helping the library to have an adequate place in the capital campaign,” Darnton said to the Gazette, referring to Harvard’s ambitious fundraising drive which launched publicly last weekend.